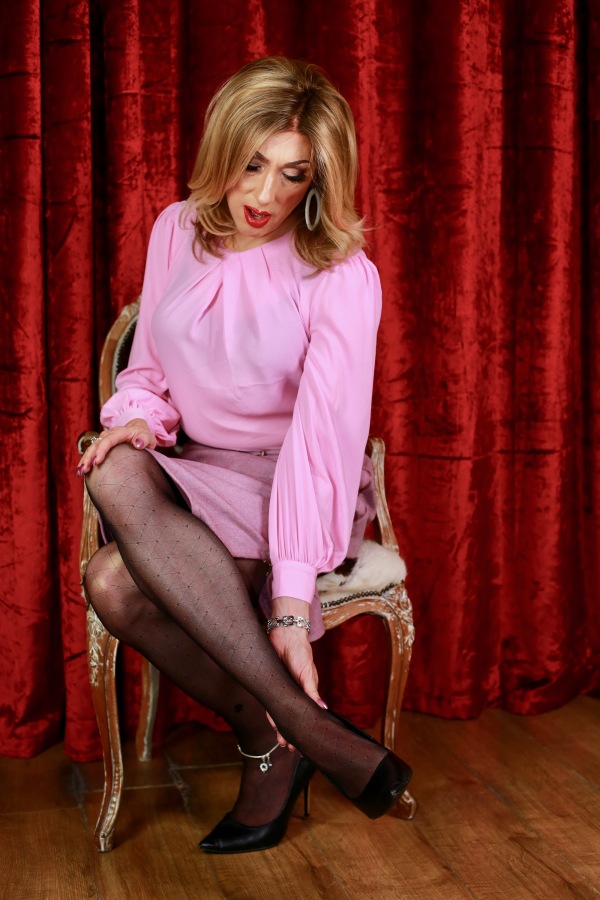 Insert usual excuse for being lazy here…. But seriously, I’ve been stupidly busy and oddly down lately, but that’s what I’m going to talk about. And the usual caveat, this one is quite a serious one about the feminine mindset vs the masculine, I’ll immediately write a Frock Tale after to cleanse the palate.

So, a couple of fun medical related stories on this post. Firstly I’ve been training heavily for an overnight marathon, for charity, which involves a daft amount of walking and cycling. And lately I’ve been suffering with some pain in one of my feet. When I say some pain I mean a ridiculous amount of bone-grinding pain; every time I walk, without socks or shoes, it feels like the bones in my toes are rubbing together.

What has this got to do with fabulous fashions and retro T-Girl fun you ask? Well, actually, and ironically, quite a lot.

After three weeks of just not being able to walk up and down stairs without wincing and shuffling down like a drunken crab, I went off to the doctors. Luckily I saw a nurse who is also a runner/athlete and after she sternly told me ‘there’s no reason why your nails should be black as a walker’ she very quickly diagnosed my problem. “Morton’s Neuroma”.

And here’s where it gets a little funny. There are two type of people who suffer from Morton’s Neuroma, which is a very painful inflammation of the nerve area between the toes. The first type of person, i.e. me, is the person who does way too much physical exercise with bad footwear. And the second type?

Middle-aged women who have spent their lives wearing high heels.

The irony of this is exquisite; all the people I work with are completely and utterly unaware of Sarah; they know me as an insanely-silly exercise maniac. And when I announced I had Morton’s Neuroma the jokes started.

“No more nights on the town in stilettos, eh?”

Over the last week I have come so close, SO CLOSE to just sending a picture of Sarah to them all. It would be the perfect time to do it and if I wasn’t such a coward I’d just go for it. But I won’t because, you know, terror and all that.

I have four weeks until the marathon but now, courtesy of the very nice nurse, I have the right shoes and some metatarsal gel supports which make it less painful to walk, but it will still be 26 miles of ouchies. ‘Course, I could do it in a lovely pair of six inch f*ck-me heels….

So, the other topic. A little more contentious this one, and a little more background needed. During Covid lockdown I started to have some serious thoughts of the future. Like 99.9% of the population I ended up having at least three mid-life crises; basically did I want to carry on living in the midpoint between gender, did I want to stop or did I want to completely go over to the softer side.

I ummed and ahhed a lot. Well, not ummed and ahhed as much as lay in bed in the middle of the night feeling wretched about it – the problem with Covid was that it gave us all a little too much time with our inner voices and, for us who cannot enjoy the delights of femininity in our own homes due to respect for our partners who really don’t get it at all, a lot of time in the drab desert.

I flip-flopped between basically putting Sarah away for the foreseeable future and taking a big step down the transition road; for me I have never considered transition because I know I’d be just as unhappy in a female form as I am in a male form. That’s not a cry for help or self-misery, it’s just a statement of fact. I literally had a shrink say, not unkindly, that I was physically and mentally incapable of being just happy, my brain throws too many ‘what ifs’ and ‘everything goes away’ for me to simply be in the moment and enjoy it.

But I saw, at least walking a little way down the road, as something I wanted to do. But not for the right reasons. I just didn’t/don’t want to be a man any more, I never did. That doesn’t mean I want to be a woman, I just have always been tired and frustrated by the masculine mentality, the anger, the vitriol, the toxicity of the masculine lifestyle. And I saw that as a direct result of testosterone.

Plus, I’m actually asexual (sorry boys, sorry girls) when it comes to physical attraction. I don’t find any form of physicality sexually attractive; my fetish and internal damage means that the whole sexual stimulus is tied into the feminine *look*. It took me decades to realise I was attracted to the outfit someone was wearing and not the person, many an almost embarrassing night of ending back at a woman’s place, or mine, and finding that once the clothes were gone the spark kinda went out. It’s why I’ve got to the age I’ve got with so few sexual liaisons, my brain just doesn’t function that way.

So the idea of, well, effectively chemically castrating myself, losing the masculine anger and developing some subtle secondary feminine sexual identity was always appealing, in a kind of fetishistic way.

I managed to get my hands on some Oestrogen. I’ve done my research, I know the dangers, I know the potential side-effects. And that Oestrogen (trans-dermal Estrodial) sat hidden at the back of my ‘Sarah’ closet for a couple of months before one night, after a particularly bad couple of weeks of not knowing who I was or who I wanted to be, I ended up standing in front of the bathroom mirror, completely naked, completely shaven, with a sachet in my hand.

I knew it was a big step; and it was making a statement about who I wanted to be going forward. So I tore the sachet open, applied the gel in a very thin layer from my crotch to my knee, let it dry, put on my pyjamas and went to bed.

And I did the same thing for 28 straight nights. Just before bed I’d stand in front of the mirror, stare at myself, apply the hormones and go to bed.

And the, after a month, I stopped. The problem with self-medicating is that you haven’t gone through the process of talking it out and I found some serious mental issues started to crop up, interestingly both as a result of the hormones and as a result of feeling completely different once I started taking them.

So what did they do? Well, pretty much nothing; 1mg dose, 28 days isn’t going to induce a new puberty. But I found a massive shift in the way I thought about myself, and also some very interesting, and scary, effects.

A tiny bit of history for those who haven’t read the hundreds of thousands of words I’ve posted here – I was born intersexed in 1969. My mother was an alcoholic at first, a constant smoker and was on Valium during my pregnancy and I got hormone-washed at just the wrong time. I had a full set of male bits plus some other proto-female bits, and in standard late 1960’s medieval health care the decision was made to cut out the proto-female bits and hope for the best come puberty. When I hit puberty I started to develop breasts which came as somewhat of a shock (my parents had told me the huge scars running from my crotch upwards and diagonally were down to ‘stomach issues’ as opposed to the removal of extra bits so hitting 15 and developing sensitive nipples and the beginning of boobs came as a bit of a lightning bolt; that combined with my love of the female clothing pretty much etched my future of sitting across the line when it came to gender).

I had a chest wax a couple of months ago which went hilariously badly, but aside from the onset of teenage acne on the chest at the age of 52 I noticed that without the chest hair, which I had never shaved since the testosterone treatment when I was 15 had made me sprout like a gorilla, my chest was noticeably raised. I have a good handful of breast, which is why subconsciously I have always shied away from shaving it. If I’m brave I may put a picture up under this paragraph showing them. After a week or so of applying the hormone my nipples became uber-sensitive again, exactly as they were when I hit puberty the first time. In fact now, after I’ve stopped the hormones for a couple of weeks, wearing t-shirts is amusingly sensitive.

It was like the body just said ‘fine, let’s carry on with the proper puberty we put on hold 37 or so years ago’. And I was fine with that; the only non-reversible initial change you get is the slight development of breasts.

I chose to stop for two main reasons. The first was by far the most important – my mind started to become very, very foggy. I can’t really describe what it felt like, other than someone pulling a beautiful floral, fluffy quilt over your soul. Everything felt softer but I couldn’t focus properly, everything became relaxed. The lack, or overriding of testosterone took away that caffeine like urgency a man feels almost all the time. I felt mentally neutered.

It felt great. It felt wonderful. But the person I saw in the mirror every night as I applied the gel wasn’t really me. It was yet another mask.

So I stopped. My chest is still uber-sensitive and, if I squint, there is definitely a little more boob there than there was before. And my mind came back, not as rabidly angry or as focused but not as ‘wrapped in a pink chiffon scarf’.

I may at some point in the not-so-distant future do it the right way, talk to a gender professional. But I need to know where I want to go and what my endgame is. For me I want the incessant masculine urges to stop, but I don’t necessarily want the whole transition process. I’ve never thought of myself physically as male, and maybe I just need to get my mind somewhere more comfortable. Either way I’m happy I tried, and that warm, fuzzy and foggy feeling was delightful but not sustainable for me, especially with my professional life.

Oh, and I had the best dreams, but that’s for another, and possibly x-rated, blog post methinks.

Stay beautiful and stay true to yourself, whatever that is on the gender spectrum.