Every drama queen loves a little drama, and while I am a stoic individual who deals with my depression and lust/love for being a femm by not talking about it…… nah, can’t even finish that sentence without being embarrassed. See, this generation is blessed and cursed in being able to purge their emotions, unchecked, into the ether via social media without a thought on how tedious it is for other people. So, let’s see if we can shake the black dog loose by just having a bit of fun for a change.

This bout of the pink-blues has been a doozy. It’s like my mind has been writing cheques against an empty bank account of shame and regret, and suddenly it wants its money. But it’s self-indulgence of the worst kind. And not that healthy. I don’t feel any better depression wise, by spouting off about my first world problems. In fact, having re-read some of my latest posts, I’m a little ashamed of myself.

Pictured – but not ashamed of her 🙂

A close friend died suddenly a year or so ago, leaving his wife a widow with absolutely no warning, and I’ve watched her gradually and gracefully recover as far as she can through the media of Facebook. I’ve seen her ups and downs, her highs and lows, and I’m genuinely sad for her situation and impressed with how she has dealt with it. My situation pales into insignificance against hers, and in light of that kind of burning spotlight my depression is just highlighted for what it is – depression.

I’ve tried to find deeper meanings because we all do that, there has to be a logical or a rational reason for the way we feel. But there isn’t. That’s the point. It’s purely chemicals gone askew combined with various external factors.

So sod the depression. At least the insomnia has given me time to stare at my picture collection for hours on end, although scanning each and every picture for signs of masculinity and obvious indications of beer belly isn’t the most productive behaviour.

I’m giving myself one last blog post to have an internal head house-clean. Then I’m going to be a strict mistress with myself, you know, tight leather skirt, high-necked black blouse, severe glasses and, hell, a whip why not.

It’s all about coping. Some people choose to chemically deal with emotional issues (yeah, alcohol counts as a chemical, Sarah), some choose to draw into themselves, some choose to throw themselves outward. Me, I tend to mope in the classic teenager kind of way, occasionally snapping at those around me. And I’m tired of moping.

I started this blog for a number of reasons, but, being honest, one of the main ones is I get a serious kick out of talking about dressing, and writing about it. And yes, that kind of kick. The fetish kind. I get a thrill about writing about Sarah’s exploits, oddly enough sometimes more of a thrill than actually doing it (going through the process of transformation is a long and uncomfortable process, see previous thoughts on getting knocked out for the duration). 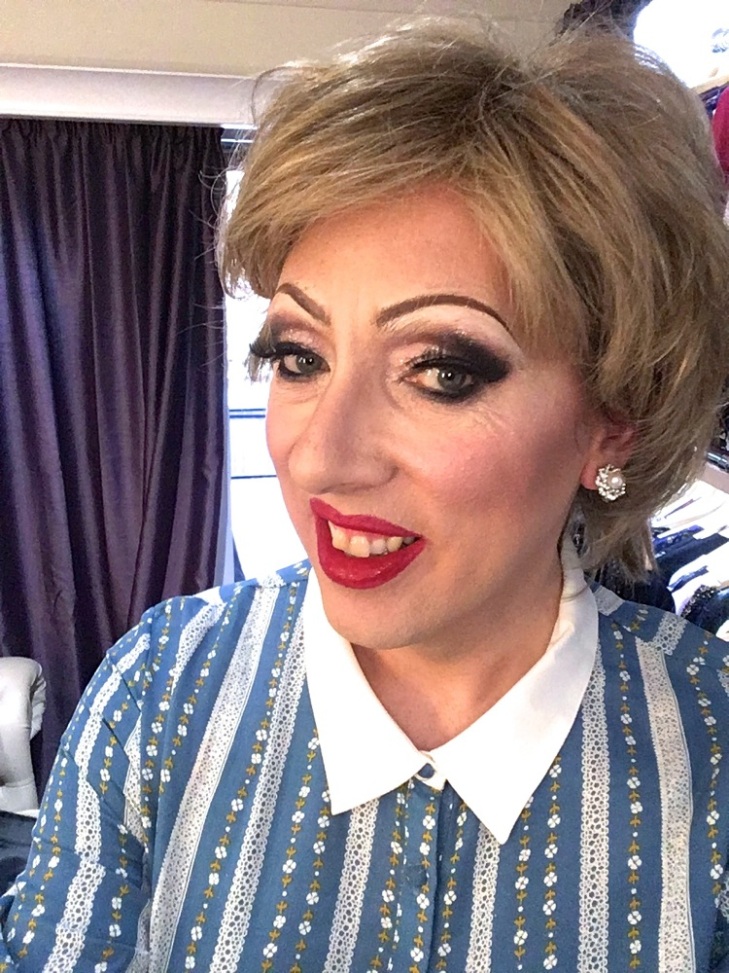 Pictured – that smile is knowing the makeup has been finished….

Writing about dressing gives me the fuzzies.

So, I promise, less of the burning martyress from now on, and more of the fun.

In the tradition of that American staple, alcoholics anonymous, I’m going to have a little purge where I say exactly what I mean for a change. Let’s see if it works…..

1: I am genuinely thrilled and flattered in all the wrong ways when I get crude comments.

There, said it. Drab me feels he should be appalled and, yes, growing up when I did in the environment I did it’s natural when I get a message from someone on Fetlife, Facebook, Twitter, TVChix or Flickr (but never here, bless you, dear readers), telling me how much the writer wants to cum in my mouth – drab me should be appalled. But Sarah isn’t, and not because she’s a loose woman (cough), but more because it’s a complement, of sorts, of her femininity. Yeah, it’s sexist and yeah, if I was a woman I’d feel threatened. But I’m not. It’s nice to be lusted after, it’s a validation, of sorts, of the way she looks and the way she dresses. And as I said last time, I dress in a way to be sexually attractive to myself. And I can’t be the only person out there who finds her hot.

And those comments are from people who only see Sarah. It’s one of the things we forget as cross-dressers. I am always thinking of her as him as her, if that makes sense. Others who don’t know drab me only know her, and therefore you’re going to get comments like that. I’m not even going to pretend to be appalled by it all, it’s part of the mystique and effect of the whole experience. Although some of these writers really need to get out more. Or less, if half of the stuff they say is true.

2: I am genuinely attracted to a number of the other girls I talk to.

Can’t help myself. I was a closet t-girl for so long that the only way to experience anything near to the thrill of dressing was to live vicariously through the pictures of others, and I still find myself quite viscerally attracted to some of my online friends. Not in a stalker/creepy kind of way (see point 1 for details), but in a fantasy romantic way. It comes back to how I fantasize about Sarah being treated. I’d give anything for Sarah to be able to have a one-to-one date with an admirer, a meal. a chat, maybe a dance. And I’d love to reciprocate that with others.

See, for me attraction is something different. I’m asexual (yeah, said it many, many times) and that has a serious effect – with me it’s about the intimacy, the contact, the interaction. Not the ‘horizontal folk-dance’ that most red-blooded lizard-brained men do.

3: I love the feel of fresh air blowing between my legs when I am outside in a dress

What on earth is that about? It shouldn’t mean anything but wow, the feeling when a breeze blows up your skirt is like nothing else. When you spend your life in trousers it comes as a shock when wearing a dress just how exposed you are. Again, it’s a tad sexist, but it’s me so I’m OK with that.

When we went to the Wayout last time the taxi parked a couple of streets over and I had to totter to the pub through midnight in London. Within two steps the wind whipped up and the feeling of the 1940s tea dress being blown against my stocking clad legs as I clip-clopped down the street trying desperately to both look like an attractive woman and not be seen at all was just sublime. Indescribable. The feel of the fabric and the delicious thrill of realisation is a heady cocktail. If they could bottle that feeling I’d be drinking it every day. 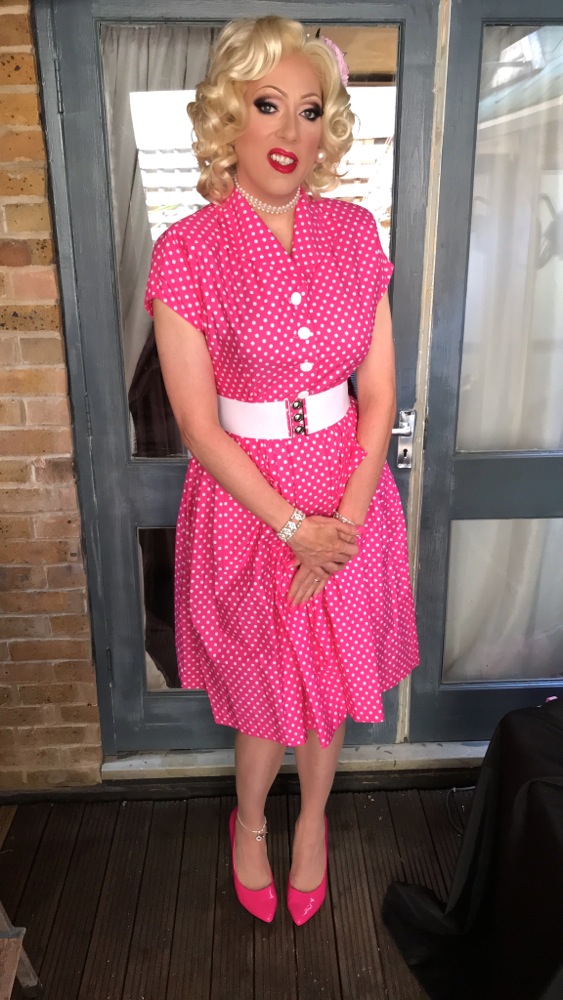 Pictured – the wind was blowing up my frock here as well…..

4: For a long time the biggest thrill of dressing was the feeling of being trapped

Especially when I was younger. The thrill of dressing was all to do with how far I could push it and not be able to get back to drab me quickly. You apply lipstick, you can’t quickly wipe off, putting on a number of layers and knowing if the parents came back you’d be stuck. Nail varnish was the ultimate, I’d paint my nails in a state of delicious fear as to what would happen if I was discovered.

It’s changed now, of course – I’m way more comfortable with the fact that my gender definition lies where-ever it does and changes on a daily basis. But I still get that naughty little shudder, goosebumps, when a zip is pulled right up.

5: I used to (and still do to some extent) absolute hate and fear…..buttons

Yeah, this one is strange. I had a shit upbringing, not even going to try and put that delicately, and I’ve never been able to work out whether I cross-dress because I was damaged, or whether I was damaged because of my urge to cross-dress. Either way ever since I can remember I have hated buttons on men’s clothing. It’s why I never wear shirts or polo-shirts, I detest the idea of buttons. It’s entirely irrational but it’s a physical hatred that I can’t put my finger on.

Yet my choice of female clothing, in fact the stuff I love the most, all have buttons.

Something tells me this is a conversation I’ll be having with a shrink at some point. Hopefully not while wearing a strait-jacket. 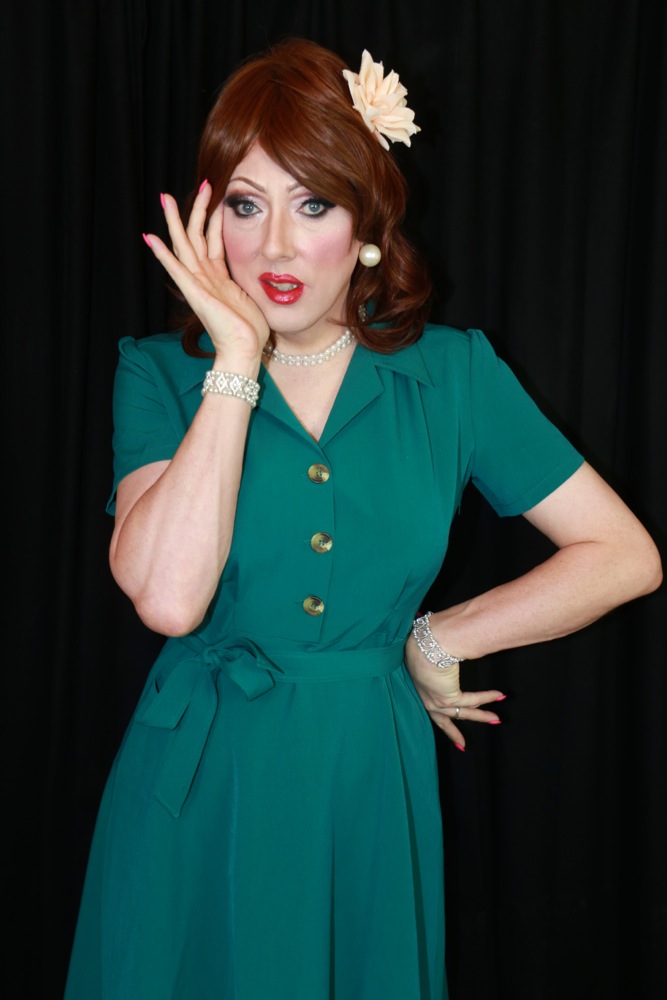 Pictured – Sarah not being bothered by the buttons on her dress

6: When I get depressed I hate him. But never her.

Never. I have image issues with him, he’s lanky, tending toward middle-age fatness (although a lot better than he used to be), hairy in all the wrong places. She’s the girl I want to have sex with. When I get depressed I hate the way he looks. All his clothes feel wrong, everything irritates.

But I can go have a session in the middle of a deep depression, and the minute she smiles at him in the mirror, and there’s no trace of him to be seen, she’s happy.

I think two people inhabit this body, and he gets too much of the time. If the roles were reversed I’m 100% sure she’d be hating herself in the mirror.

Pictured – aww, who could hate her?

7: Sometimes my pictures go into the realm of pornography

It’s down to escalation. I love seeing pictures of Sarah in situations I’d like to see her in, so with a touch of cleverness and a big dollop of pervy-ness I tend to sculpt and craft images that turn me on.

For instance, and look away if you don’t want to spoil the idea of Sarah being innocent, I’ve bought this wonderfully naughty lube that looks and behaves exactly like, you know, ‘stuff’. Hell, it’s called ‘Cum 4 Boy’ which isn’t exactly subtle. And I have a number of pictures that I don’t share of Sarah in various ‘whoops’ poses. It’s superb, And it’s pornography, pure and simple. But that, in and of itself, is another facet of the thrill I get from being her and wanting her. And it’s hurting no-one, except his masculine pride. But given there are 17000+ pictures of Sarah in literally hundreds of poses the idea of masculine pride is a little, err, out-dated.

Pictured – for the record, the lube tastes bloody awful. So, accurate on all counts then 😉

Ahhh, that’s better. It’s good to purge occasionally. And I promise the blog will be back on the straight and narrow of retro frockage very soon.

Stay beautiful and be honest to yourselves, darlings.

4 thoughts on “[Philosophy] Full-Circle-Skirting around the issues….”