It’s Black-Dog ™ season again, but this time it’s been a bit harder than normal. Too many things converging at once, too many sleepless nights (insomnia, cha-cha-cha), too much dipping into the drinkies to make it seem a little less ‘meh’. So this post will ring true with a lot of us less confident ladies, but for people seeking a little frock-thrill I’m afraid you’ll need to skip the text and look at the pictures. I promise there’ll be a load of good ones.

The last six or so weeks I’ve been getting, on average, around three hours of sleep a night. And there is, surprisingly, an up-side to this. Other than the amusing fuzziness and feeling of being vaguely high all the time that sleep-deprivation gives you, it also means I’m awake during the witching hour. Not midnight, the proper witching hour.

See, 3:00am-5:00am is an odd time. When your circadian rhythms are running normally (go look them up, very interesting read) this is the low time, when most of the body bits are resting from the days activity. Also, oddly enough, the time most people die naturally (i.e. not by accident or disease). It seems to be a peaceful period when the mind and body are chilling.

And when you have insomnia, it’s a wonderful time to just think. All the hassles of the day seem to wash away and you’re left with the basics, untainted. And I’ve spent a lot of time over the last five weeks just thinking about me and her.

I don’t dress at home, other than to try on a new frock for size. For some reason it feels nice to separate the two lives, when she comes out to play it’s in a neutral, or rather a complete ‘Sarah’ environment, with none of the drab trappings that he brings to the party. But there is a price to pay, to myself, for this. Whenever I finish a session and travel home I’m high on the rush of fun I’ve had, which feels like nothing else in this world, but over time, give it a couple of days, I kinda crash a little – imagine it as the sea, a wave of gorgeous femininity raises me up, and in return the water needs to drop before stabilising.

In this case, since the last session, I haven’t come back up. I dropped as I usually do, but stuck down there in the doldrums, sad, questioning myself about my choices and the like. You know, standard depression. Hell it’s why it’s called depression and being down. 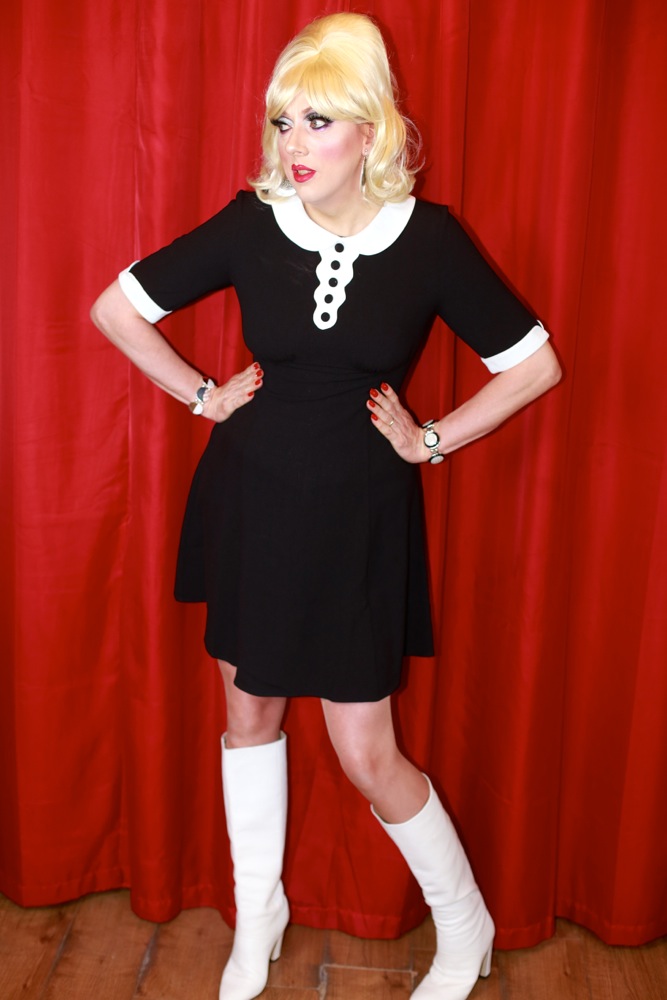 I usually bob back up after a while with thoughts of fun but this time I haven’t. Here’s an example of it – I had an important meeting last week with a client where a friend of mine, a guy I used to work for four years ago, was also attending. His first comment to me while we waited to go into the meeting was ‘you’ve lost a lot of weight’ followed a couple of sentences later by ‘seriously, you’ve lost weight’. For a start, odd thing for a bloke to say to another bloke, but I instantly got paranoid. Not because of weight loss because I’m fat and putting weight on. But because I thought he was lying to me. Now that starts to sound like an eating disorder….

Don’t worry – I’m way past the ‘I want to be alone, darlings’ phase of my life, and if I purged all the gorgeous stuff I’ve acquired recently I’d be an idiot. But I haven’t bobbed back into her mindset as yet.

What I have done is finally understood, in the clear and concise light of 3:00am insomnia, what Sarah is to me, and it’s kinda sweet.

I’ve mentioned I’m in a sexless and, going to be honest, sometimes loveless relationship. That’s not a complaint or a knock on my other half – it is what happens in long term relationships, especially when you put two damaged people together. Love is, sadly, a way for nature to force sexual activity, a rush of emotions that binds two people together. But it doesn’t sustain, regardless of what movies or books want you to think. It changes, but that initial period of pure love fades into something else.

I happen to be going through a rough spot at the moment, relationship wise, again not due to me or to my other half, but simply to timing. You hit a period of depression and everything is hard, breathing, talking, hell everything. Get two people together who suffer from the same kind of downer and occasionally their depressions will synchronise, and both will be down at the same time. And when that happens it’s not fun. 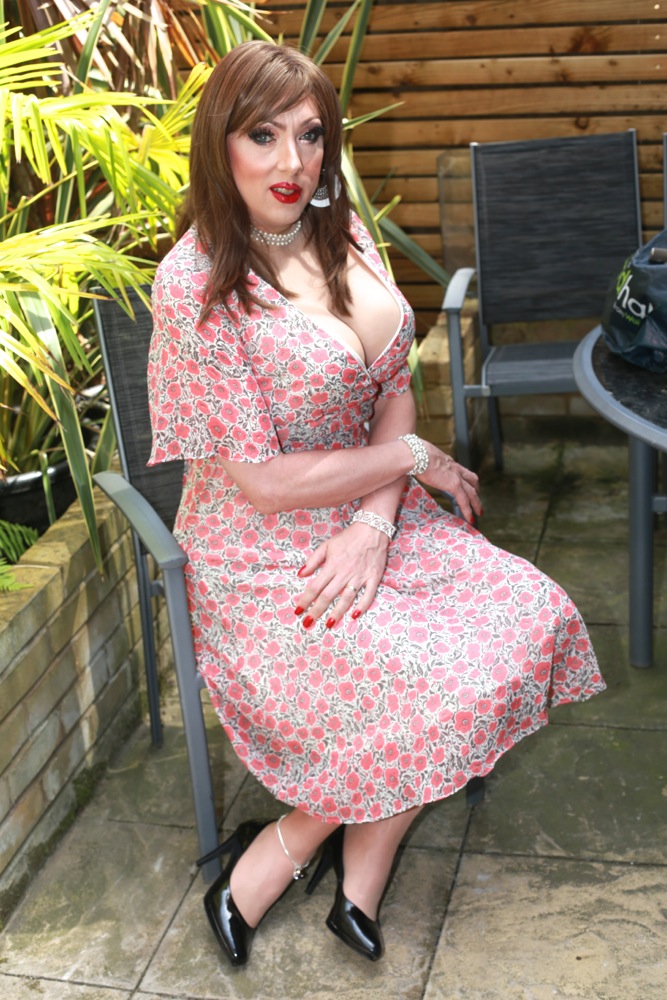 Pictured – the girl I want to have long, passionate sex with. No idea why. Cough.

And I’m not cheating. I can have serious and quite intense fantasies about doing things to her in a way that, if I had them about other women, I’d be betraying my other half. Sarah is my safe female fantasy.

And it comes down to a couple of things – the lack of intimacy, the yearning for some kind of interaction (not sexual unless it is Sarah), the ability to influence 100% how she dresses and how she behaves.

Obviously the minor problem is that she is me, but hell, let’s park that one.

The crux is this – I had a crap childhood, very little direct love of any kind. I was also sensitive, clever and very gender confused from an early age. Chuck all those together and you either get a serial killer (which I’m not, I promise) or an individual who has to build some serious shielding in order to just operate normally. And, as I’ve said before, I’ve had that shielding up, which is very masculine, for so long that when Sarah pops out she pops out properly. But the shielding is still there.

The last visit I did to the Wayout showed that in spades. I had my heart set on an evening of pure Sarah, bit of giggling, bit of flirting, bit too much alcohol with my friends. The minute I stepped out of the taxi onto the dark, midnight streets of London the male shielding came down. Instinctively.

I’d had fantasies of standing alone in the pub, drink in hand, in a wonderfully feminine pose, maybe talk to an admirer or two, maybe even have a dance. In reality I headed for the first booth I could and wedged myself in, with Cindy on one side and Vicky on the other, and prayed for the clock to tick over to closing time so I could scuttle, slowly because of the lovely heels I had on, back to the taxi.

Pictured – the booth, the scared girl.

But that’s the point – Sarah is a ‘fantasy’ of mine. Fantasies are wonderful and healthy, the way your body can supplement the endorphins that make you happy. Realising a fantasy, nine times out of ten, is immensely unsatisfying, especially if you have a wonderful imagination which most of us damaged people have.

And at the moment, because of the depression I’m stuck in, Sarah is a bittersweet fantasy. I’m not exercising that much at the moment, and the depression is making me crave-eat – you get so down you need something to eat that is different, that spikes a bit of endorphins, but when you eat it it is not satisfy, so you crave more. Same for alcohol. Combine those two and I’m on the verge of putting on weight again, and the moment I do I get guilty for betraying Sarah. In fact the guilt comes after any food now, a side-effect of the depression, which is a triple-hit. Weight, guilt and craving, oh my, to quote Dorothy.

And I’m getting the standard tranny-guilt as well – you stare at the pictures of yourself as herself and start to see him in the cracks. You start to see every picture as a failure of your ability to look and be feminine. In the harsh light of depression you see all the flaws, the age, the way the body shapes masculine rather than the desired feminine. In fact you start to see stuff that isn’t there.

Pictured – people look at this and come back to me with ‘wow’. I think ‘move your hand, that’s a masculine pose’.

Excuse a moment of Sarah-ness but it isn’t fair. I know it’s a reflection of the ideals and morals wrongly imposed on me as I grew up, and I know I should be better than this, but when you’re exhausted and depressed your inner defences against the old stuff crumble a bit. This is why we binge and purge – shame and guilt, completely unnecessary, influence our behaviour.

You can’t teach an old dog new tricks, but you can give him (or her) a new bone.

Anyway, excuse the vent and purge, it’s been a bad five weeks and there seems to be no light at the end of the tunnel. I know that depression is just chemical imbalance, but that scientific explanation isn’t really helpful when you find yourself in tears at 3:40am.

I’m letting Sarah have some time mid-October so hopefully I can get back on the exercise program, off of the sweets and onto the treadmill, before then. And re-ignite some of her love for fashion – this has been the longest period I’ve gone in the last three years without indulging myself in a new frock. Again, depression makes every website look bland.

So, bit of a downer, eh? One of the things that gets me through these kind of periods is the realisation that the woman in the pictures is me. It’s not much to cling to but it’s enough, until the sun rises, 5:00am passes, and the dark veil of sadness lifts again.

So stay beautiful and remember things do get better. And when they do they taste like a fine wine compared to flat water. 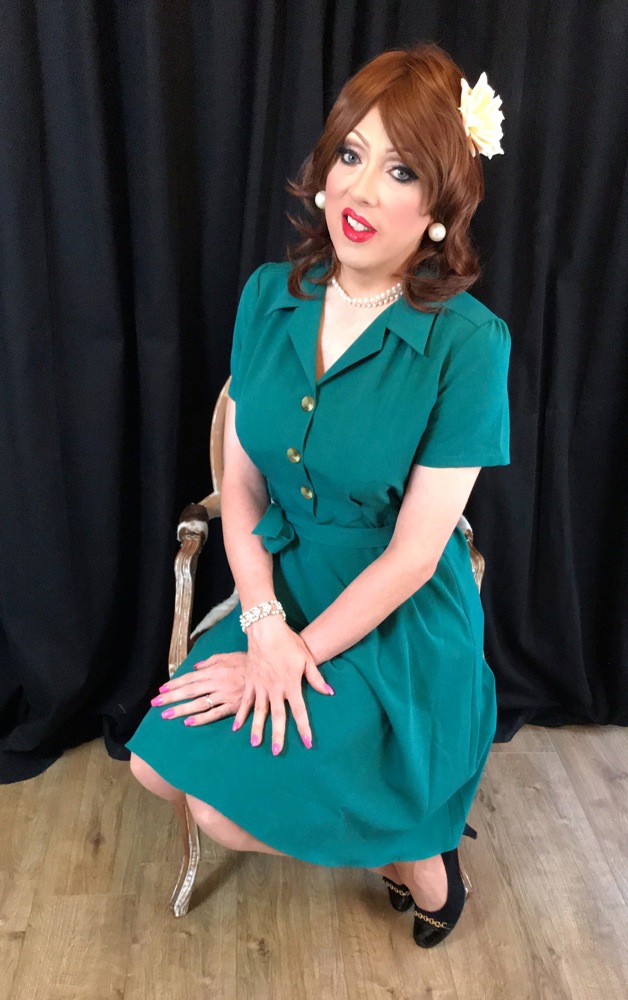 3 thoughts on “[Philosophy] A purge, a rant and a Sarahphinay of sorts….”