I’m a very lucky girl. There, said it. Compared to a number of the lovely people I know I have it very easy when it comes to the old frock-urges. Now my other half knows, albeit reluctantly and because she doesn’t know what private mail means, I no longer have to do the serious amount of subterfuge I did before to enjoy my illicit hobby. But that doesn’t mean that habits fade away.

So, I thought I’d share some of the frankly insane ways I went about hiding Sarah and still, to a certain extent, do.

Pictured – not a good attempt at hiding Sarah. Aww, bless.

In some ways being a cross-dresser in the 80s, 90s and early 2000s was an odd thing, which, given that sentence itself, is pretty much a done deal. We didn’t have Amazon, eBay, Facebook, Twitter, Flickr, Fetlife and all the other ways we could talk to other people who shared our interest. Hell, I didn’t talk to another crossdresser in real life until 2013 (seriously).

We had surreptitious sneaking of cosmetics into big shops at supermarkets (I remember buying a lipstick as part of a big shop once and being utterly terrified the woman on the till would notice it. Well, that or my obsession with her uniform – it was gorgeous). Buying ‘something for the other half/missus’ from Primark, Laura Ashley or another high street store. Or going to Transformation.

Now Transformation was something of a ‘rite of passage’ for girls of a certain age. Yeah, it was expensive as hell, but you couldn’t get the stuff they were selling any where else (without living in London or, oddly enough, Germany, but I’ll get onto that in a bit). First one I went to was the one in Birmingham and I drove past it twice, to make sure it was real and not some kind of Police sting (I have a stupid imagination that lives to tease me). Then I parked three streets away and walked past it twice (sigh) before diving in.

I can’t describe how fast my heart was beating as I stood in front of the racks of soft-core tranny videos and specialist magazines. I spent a fortune in there the first time, worried about whether the plastic bag would hide my purchases but more worried about getting out of the door.

See, the doors at Transformation were by design not transparent. I actually asked the woman behind the tills to look out and make sure no-one was coming before I sprinted out of the door and all the way to my car. Surprised I didn’t have a bloody heart attack.

Anyway, my point is that it was a different world then. And I hate myself for saying it. It’s much easier to get stuff now but, and there’s a big but, if you’re sharing a house with someone who doesn’t know it all becomes terribly complicated.

Pictured – bribery with Tea and Submission is not an option if she doesn’t know you like being the maid.

So, what’s the secret to not getting discovered? Two words – plausible deniability.

I used to make sure that whatever I bought, whatever I did, I had a plausible excuse that would work if I was caught. In fact, I did nothing that I didn’t have this little get-out-of-female-jail-card-for-free. I never got stuff shipped to my home address, always to a post office or, when Amazon *finally* introduced them, the lock boxes.

When possible I never ordered anything in my own name. Yeah, that sounds a bit dodgy, but using a femm first name for *delivery* but your own second name is a good way to generate plausible deniability. ‘It’s a gift for my wife’ or, even better, ‘It’s a gift for my unmarried sister’. Same name, see?

There are some gotchas though, and here they are:

Lindy Bop ship their parcels in a bright pink with black polkadot envelope. Really. Joanie Clothing do something similar. It’s like their goods are aimed at, you know, actual women. Who’d have thought it? But seriously, if you order online from anywhere other than Amazon remember it may come in a very femm wrapper. Women like that. Closet crossdressers, err, not so much.

Pictured – but when the clothes inside the packages are this gorgeous, it’s hard to resist.

Let me tell you about Cookies. Cookies are a tiny parcel of labelled information your browser stores that are specific to the websites you visit. Unfortunately some of the websites share that information. So, if you sneakily have a peek at those gorgeous pink patent f*ck-me heels on Amazon there is a very high probability that other websites (and bloody Amazon) will helpfully suggest other kinky shoes you’d maybe like to buy. Example – I bought a lovely 1940s hostess dress from a certain site, Then, when demoing some software to a client, I opened a browser window that was pointing at another site, but right at the top was a selection of other frocks I’d like to buy.

It’s insidious and very damning but there’s an easy way to get around this. Whenever you surf for clothes/shoes/sex-toys for *her* put your browser in incognito mode. In Chrome it’s File/New Incognito Window. It stops those naughty little cookies from sharing that information with other pages…. Stops those inevitable questions from your other half when she sees the embedded adverts around ‘Ooo, are you buying me something nice for my birthday’ or ‘are you a transvestite’.

Pictured – Are you a Transvestite? Err, yes?

Buying something for *her* in a shop rather than doing it online? Well done, you have way more courage than I do. Even now, after hundreds of outfits and hours and hours of being Sarah, I literally can’t walk into a shop and buy a dress. I think the people at the counter can see through my sweat and anxiousness and know, gasp, what I am. Nearest I get is ordering online and picking up ‘a present for the other half’. Who happens to be the same dress size as me.

Anyway, if you do, use cash. Yeah, showing my age again, but go to one of those funny holes in the wall and get some real money. Don’t leave a trail (or a receipt). Especially if you have a joint bank account. The ‘I was buying you a present’ excuse runs thin very, very quickly.

4: Secrets are only Secrets if only you know

Going to sound paranoid, but it’s a fact. Two people cannot keep a secret. There’s always alcohol, close friends, arguments, whatever, but eventually two becomes three, three becomes four and closet becomes a stage. If there’s something you don’t want the world to know, don’t tell the world. Or more simply, only tell people things you can afford other people to know. 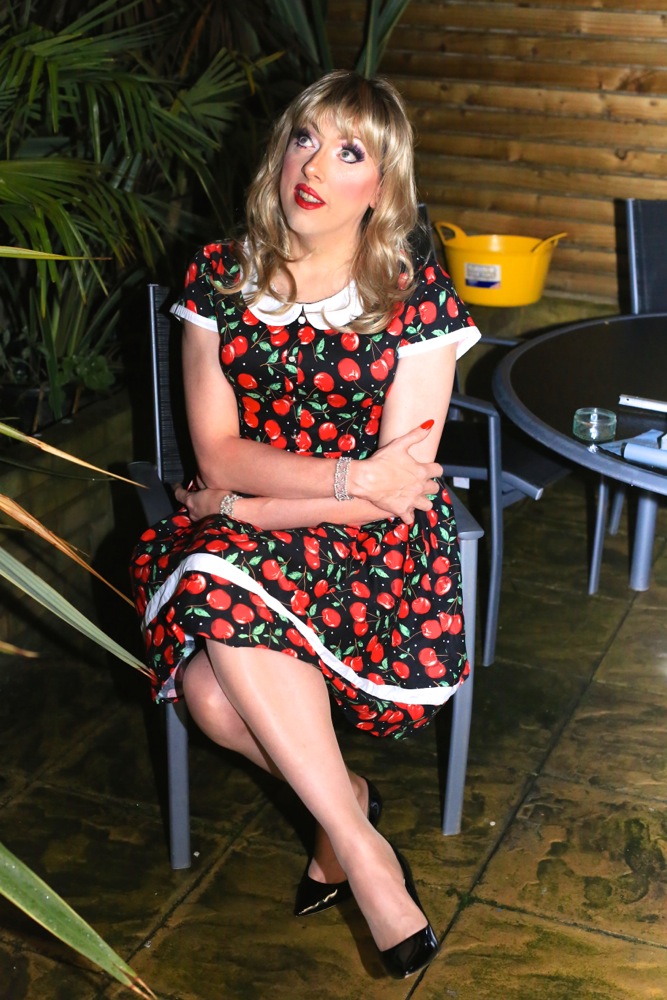 Pictured – and if you find yourself looking like this and considering what people can and can’t know? Just enjoy the crisp evening and the feel of a lovely frock…

I used to do this for a living. It’s impossible to keep people from talking. So, if you genuinely want to remain in the closet for ever, don’t share. My secret got buggered when I broke one of my rules above – I shipped something to my house. Granted, it was to me, but my other half has a side-business selling stuff on eBay and I have a history of destroying parcels (I just can’t wait to get at them). So she carefully unwrapped a parcel for me and, to her shock, it wasn’t a T-shirt (as I tried to claim later when she finally admitted she’d opened it) but a lovely Peter Pan collared retro dress. ‘Eeep’. Point is, I broke my own rule. But once she knew about it (after a rather awkward conversation in which she accused me of having an affair, which would have been bloody masterbation) she kept the secret for a good two days. Two days. Wow. I’d managed to keep the secret fairly well for 43 years.

But that’s my point. Secrets are bad for you. If you can, tell. If you can’t, don’t.

5: The Internet is a surprisingly small place

Given the number of human beings on this planet it should be quite difficult to bump into people you know on the Internet. But that’s not the way life works. Take this example – a guy I worked with for seven odd years in a highly secure organisation is now transitioning, but back when he wasn’t I came upon his profile on TVChix. I recognised him *instantly*. No history (as far as I knew) of any transgender inclinations, and back then I was still firmly in the closet. But I knew it was him the instant I saw him.

What are the odds of that? Well, quite high actually, because (s)he made a couple of small mistakes. Actually putting her home town on her profile (never, ever do that if you’re trying to stay closeted). Her actual age. Her actual birthday (which I cross referenced with *his* Facebook. I’d done a casual search on crossdressers in the area I lived in (which I didn’t have on my profile) and, as she lived in the same town, her profile was the first I found.

There’s nothing wrong with being honest on the Internet. But if you’re trying to hide your identity, there’s no reason to be honest either.

Pictured – in the name of honesty I feel I have to admit to always wanting to be in Abba when I was growing up.

Yeah, it’s a thrill to court danger, but you need to weigh up the consequences. I’m a lot more cavalier now, basically because the people I know and love already know the secret, so if it does come out a: I can’t be blackmailed and b: it won’t be a surprise to the ones I care for. Before my secret was out it was a completely different situation – my Flickr account had no pictures (I was a lurker and an admirer), I had no Facebook for her, no Twitter for her. There was nothing to link her and him. Now, different. Even though I’m still technically in the closet I have drab friends on Facebook whose feminine alter-egos are Sarah’s friends on her Facebook. In fact, Sarah and drab me share a couple of friends. which is suicidally silly (I *loved* a post from my transitioning friend, and then *liked* it as drab me which was a hell of rush seeing Sarah’s name listed in the set of people who had liked/loved the post along side drab-me).

Downside of that is drab me keeps seeing Sarah on his ‘you might know these people’ list. No shit, Sherlock….

Anyway, enough lecturing. Any more and I’ll have to buy a smart blouse/skirt combination for my next session and do the whole ‘teacher you used to fancy’ look. 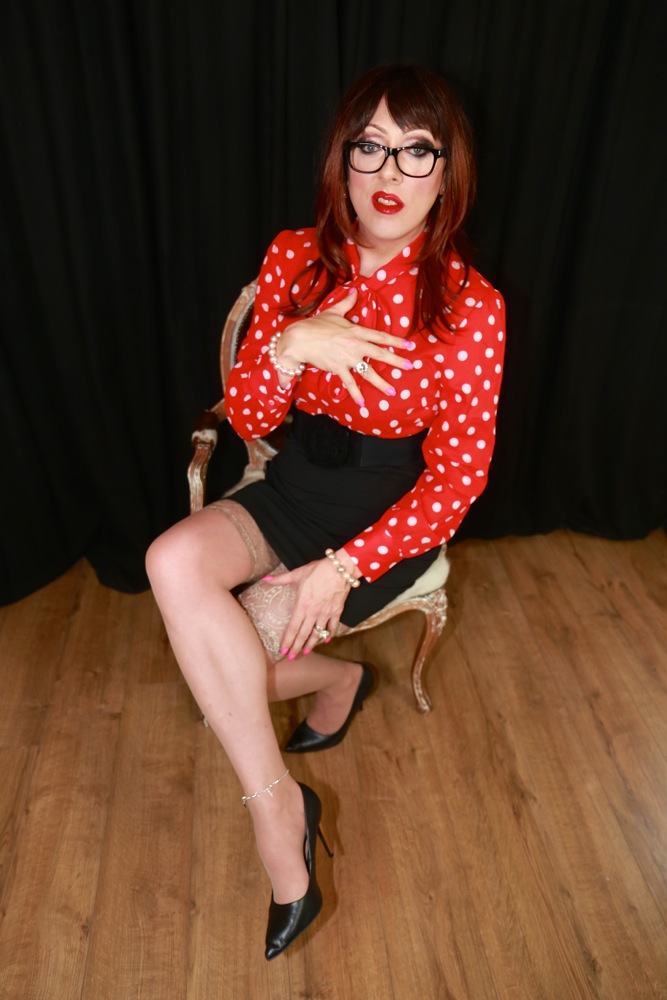 But seriously, if you’re in a situation where your love of the feminine has to be kept a secret, please be careful. Or, if you can, tell the ones you love.

Stay beautiful and covert, if you need to. 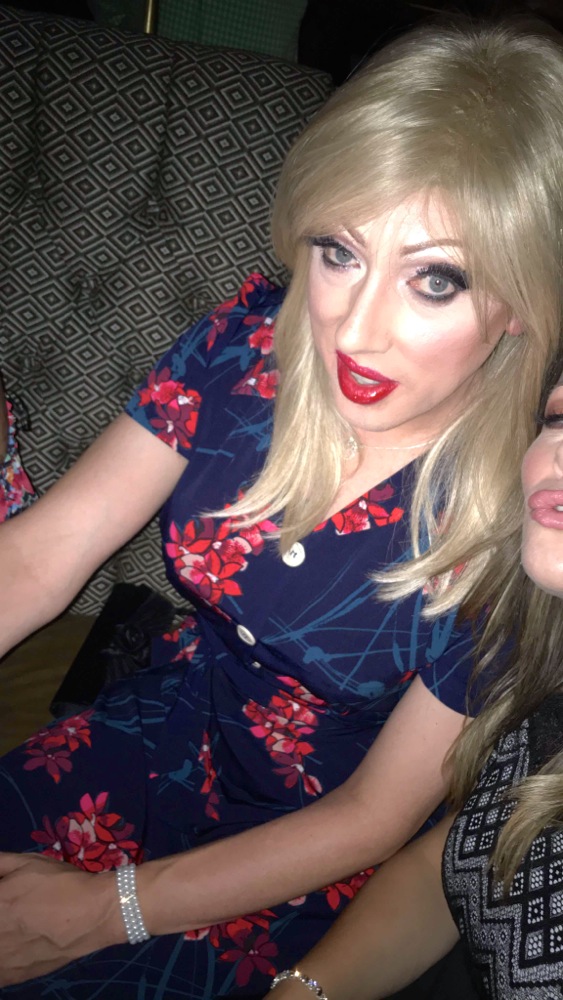 Pictured. Covert. In one of London’s leading T-Girl nightclubs. Yeah, that covert….