Again, sorry for being quiet – this time I had a valid reason, for a change. I may have mentioned that I’m an author, amongst other things, in drab-life. Well, I’ve been working on and published my fifth book this week, just in time for Xmas, so all of my writing energies have been directed at that. But it’s done and dusted, so Sarah can have some more time at the keyboard…… 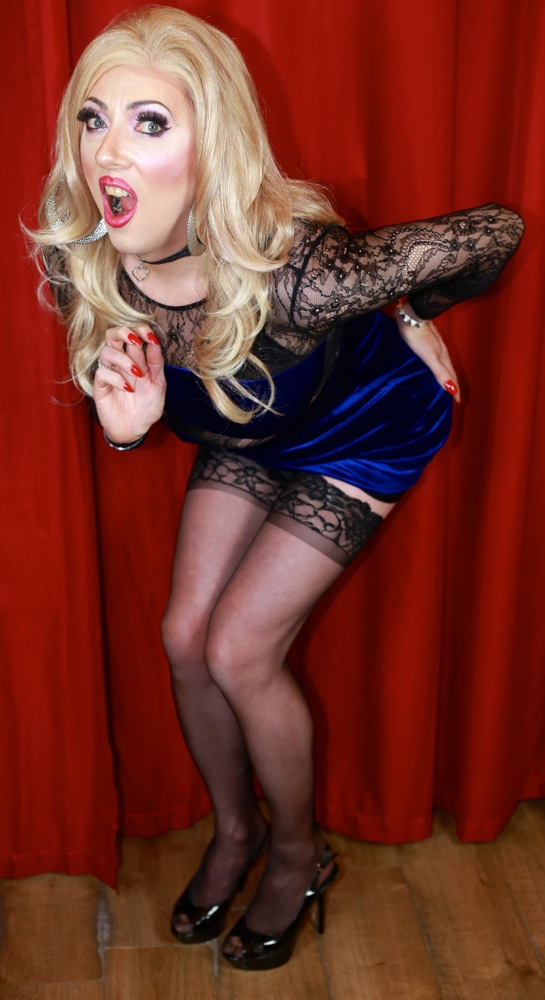 Pictured – I think she’s excited at the idea of that…

I’m gong to have a little whinge about fashion in this one – stick with me, it’s worth it. It comes from a session I had a couple of weeks ago, which I will get around to writing a luscious long post about as there were some lovely images, along with the gorgeous selfies from the last post. But first I want to have a little chat about women’s fashions and the pressure it puts on us, well, part-time ladies.

But first a caveat; I’m pretty much the least sexist person you’ll meet, mostly because I know what it’s like to walk along a busy road past midnight with your thin dress being blown around your stocking-clad legs as drunk men stare and exercise that aggressive behaviour that comes out when the groin takes over controls of the body. Being approached unsolicited and asked if a: I have a penis and upon finding out that I do b: have I ever sucked someone else’s pretty much highlights the perils that women have just being out and about in society. Actually, not a good example, the creep who did that probably wouldn’t be hassling woman come to think about it, but you get my point.

So, with that in mind, I’m going to make a rather sexist statement that would possibly offend any women reading this blog. And it’s this – ladies like myself have a much harder time with women’s fashions than, you know, the other type of lady (hint, GG).

Let me explain – whenever I do a session and let Sarah have some fun I have to really squeeze the body in ways it isn’t designed to squeeze. The hormones running riot in my system are trying hard, as I’m well in middle-age, to turn me into a pear, while Sarah, bless her, want’s to fit into all those slinky dresses the media keeps telling her that woman have to wear.

I understand how hard it is for normal women to deal with the fashion industry and the media as a whole – the ‘desired’ shape and look is mad, partly because every picture you see in a magazine, website or advert has been manipulated beyond belief. From my perspective, chuck in a body that is trying to store fat in all the wrong places and it’s hard to shop for Sarah without assuming every frock that comes through the post will either be impossible to get past my waist, or will be tight in all the wrong places, loose where it should be tight and make me look, well, like a man-shaped sausage trying to squeeze into an hourglass feminine figure.

Pictured – methinks the lady doth protest too much…

There are things I can, and do, do to counter this. I wear a corset so tight I’ve taken to calling it ‘being cheese-wired’ when Cindy, bless her, persuades me it can be tied fully (my waist, after the tightening, is a staggering 32in, which on one side is a nice size 16/18, and the other leads to my ribs being bruised for a good ten days after a session). I use three padding sets of underwear that add hips, bottom mass and allow me to completely hide that little bulge (hell, even typing ‘little’ makes drab me flare in argumentative denial, which is amusing given the fact the he is her in every picture on this page), and then, depending on the frock and outfit, either a padded bra which adds a large amount of extra circumference to Sarah’s top half, or a very convincing latex breast-plate for when Sarah wants to ‘show off the girls’.

Pictured – Sarah and ‘the girls’…

All in all it feels like I’m wearing armour when I have all the undergarments on, and it does massively change the profile of Sarah’s body. But it’s still hell on earth to get the correct sized dresses.

Cindy is obsessed with squeezing Sarah into smaller and smaller frocks which is both flattering and terrifying in equal amounts. The image at the top of this blog? A bleedin UK size 14 frock. To put that in perspective, when I came back out of the pink-velvet closet I was buying size 20/22 frocks and filling them to bursting.

So I’ve got the body size and weight down a bit but I’ve unintentionally started to subscribe to being an actual woman. Let me explain that a bit better, every meal I have now I feel guilty after, terrified I’m going to go up a dress size. That’s an……odd way for a nigh-on 50 year old man to think. I actually started to get a little worried about it – every time I looked in the mirror after a shower I was convinced I was getting fatter and fatter.

It’s a dangerous precedent and something that women, on the whole, spend their lives fighting. The combination of industries forcing them to squeeze into smaller and smaller frocks while the other side of the industry forces excessive eating, it’s madness.

Some part of Sarah was amused, to a certain point, at drab him starting to turn into a full-time eating disorder obsessed woman. But, and it’s an obvious point, it’s not a lot of fun.

I think it’s fair to say that women are wrongly programmed from an early age to compete in terms of attractiveness. And it’s a recent thing. If you look at the fashions of the 50s (which, cough, I do a lot) the female form was much more normal, much more rounded. There wasn’t the heroin-chic of the 60s-80s that has left the fashion industry forcing women to be slighter and slighter.

Pictured – but then again, that leaves all the gorgeous and pretty 1940s/1950s frocks for me….

And I feel their pain. For us non-GGs we get that plus all the hormonal fun of the body going mad in terms of stuffing fat in the bad places.

I subtly talked to my doctor about it last time I was taking my latest hypochondriac condition for him to dismiss, saying I was exercising hard and watching the food but for some reason I was still bordering on the pregnant look. He explained that fat disappears in different places at different times, especially as you get older. That last bit of fat, which pools around the beer-gut, is the hardest to get rid of and the first place fat will re-settle. Whoopee.

But I’m rambling. My original point is that we girls get all the pressures of the female fashion industry combined with all the fun of getting older on the other side of the fence, plenty of hair in all the wrong places (the inside of my nose, pre-Sarah-cleanup, looks like a grey and black forest), all the bulges of being early-stage pregnant without the female shape. 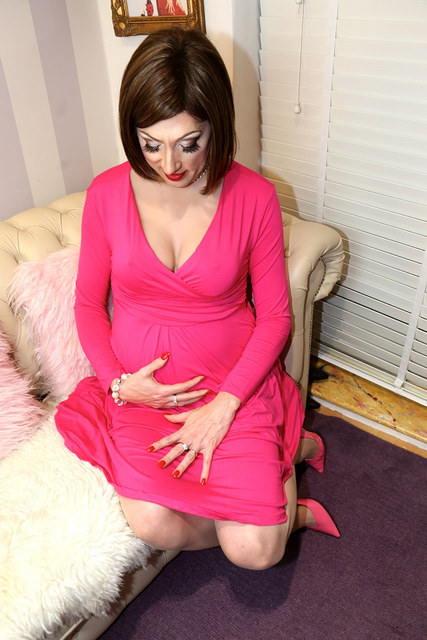 Pictured – course, you can just take off the corset and do a ‘mum to be’ photo-shoot if you’re a little strange…..

Of course, I could start to dress my actual age (you listening, Sarah?) but where’s the fun in that?

Anyway, going to stop the very feminine complaining about maintaining my dress size, which I mentioned to my sister when Sarah came out to her a couple of weeks back, with the wonderful response of ‘welcome to my world, bruv!’. I’ll write another blog momentarily talking about all the gorgeous outfits and looks we squeezed out of Sarah’s tortured frame at the last session.

Stay beautiful – I’d say start ignoring what the fashion industry tells you you should look like, but when are we girls ever going to do that? 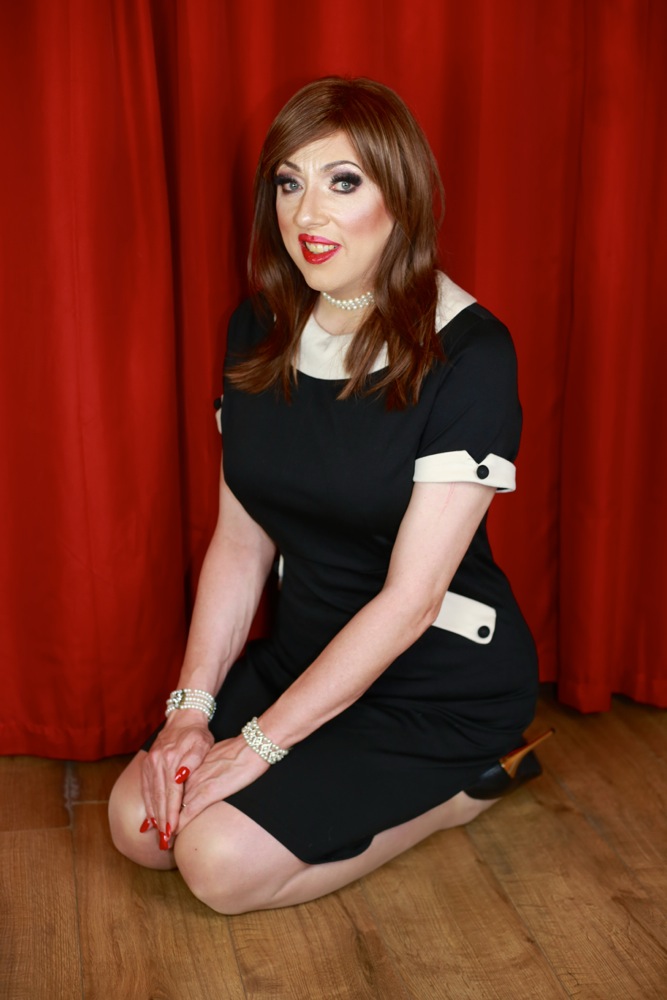