I’ve literally just got back from the trek to London, it’s 01:23 in the morning, I’m somewhat (r.e. utterly) knackered after two massive sessions of Sarah time in London but I felt I needed and wanted to put up a quick blog post that is going to be somewhat different from the usual.

Don’t worry, I’m not going to talk about the weather or the poor roads in England. I’m going to give you a whistle stop tour of the last three days through selfies.

I did a lot of outfits, some utterly sublime, but some of the selfies myself and Cindy took between looks were utterly lovely – I’m going to blog on the sessions themselves and describe the looks because, well, I;m a vain girl at heart, but this post will be a little more down to earth, just selfies in the moment that capture how wonderful and fun the entire escapade was.

First an overview of what I did. I went to London on Thursday, got drunk, crashed in the hotel, over to Cindy’s on Friday and made the mistake of walking in the pouring rain (drab me doesn’t own a coat or an umbrella, long story involving daft masculinity) which meant I was sodden, did a ten hour session, ate a stonkingly nice pizza with the maestro herself before heading back to the hotel for midnight. Up yesterday (Saturday) at 8:00am, off to Cindy’s again for an eight hour session, then off with the makeup, taxi to Euston, train to Birmingham International and a two hour drive home. Which brings us to now.

The thing with selfies is that they are more adhoc than the photoshoot pictures, more raw, more close-up and normally I’m not a huge fan of sharing them. I am a (nearly) 50 year old bloke how hasn’t made an effort over the last thirty to do anything really healthy, unless drinking copious alcohol, staying up all night watching movies and playing computer games and developing a career that actively pays me to sit on my arse (software engineering); I need the lights and styling of a professional photoshoot to give Sarah the time and style she deserves. Or so I thought.

This time Cindy’s other half, Vicky, had built a new mirror for use within the studio. It has seriously bright lights, and for some reason it just makes selfies so much fun, and so good, that myself and Cindy couldn’t help sneaking in whenever we could to take selfies.

So this blog post is going to be a selection of those selfies, plus a couple of others that are not the norm for this blog but you’ll understand why they are here as they add context to the story of the three days. And on that note, let’s start with something……different. 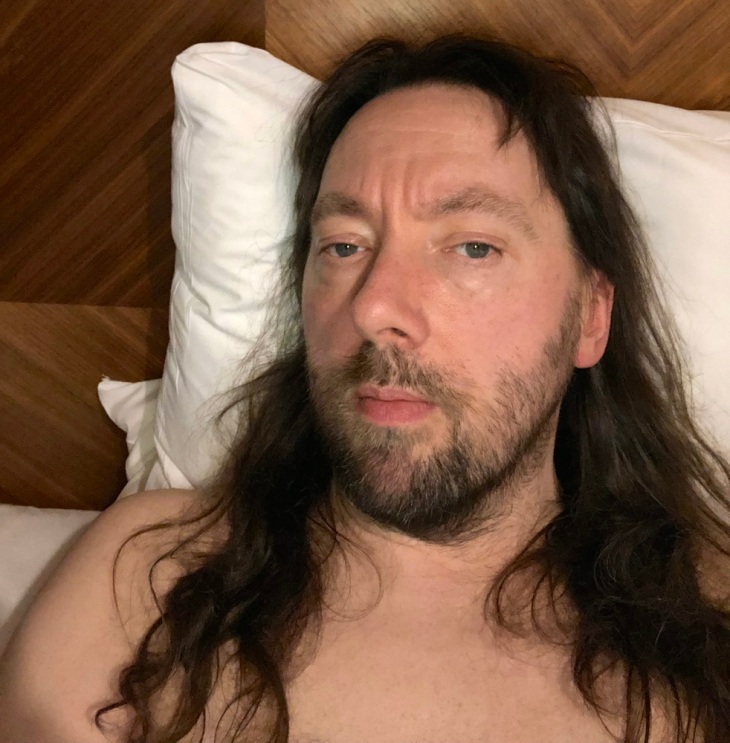 Yeah, should have warned you. That’s drab me. Thursday night in the hotel, the night before the first session. This is the face I live behind 99.9% of the time, the facade that has got me safely through fifty years so I’m not going to knock it. Plus it really highlights the sheer skill and magic of Cindy, because within ten hours of that photo……. 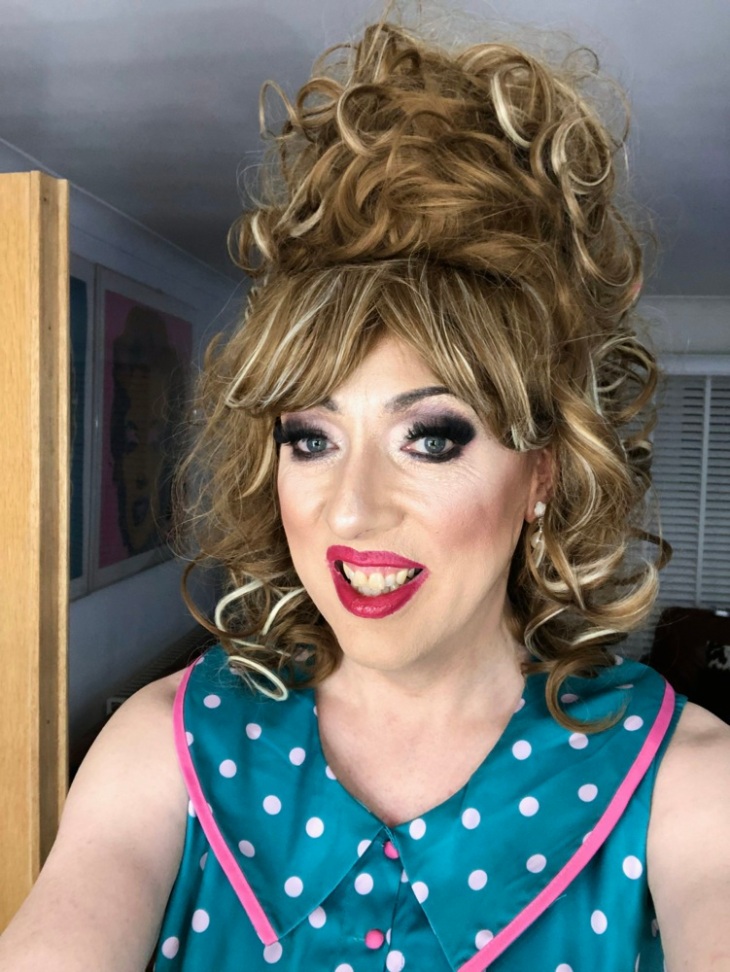 Now that’s much, much better. This was a 1960s style frock that I wanted to try again, a Lindy Bop that was so tastelessly retro it actually came back around to stylish, combined with a seriously OTT wig from, what I called, ‘Cindy’s Mad Drag Queen Wig box’.

Also compare and contrast drab me’s usual expression (I look like that all the time, I’ve cultivated a ‘don’t talk to me’ look), and the joy on Sarah’s face.

And on the subject of joy…..

Also Friday. Revisited that gorgeous cherry frock (another Lindy Bop). My jaw was hurting from the uncontrollable smiling at this point.

The first appearance of my favourite wig! We call this the Phoebe because it reminded me when we first used it of the character from Friends. In total we did ten looks on Friday in ten hours, of which three hours of those were the sheer effort and hard work of Cindy to bury drab me n luscious Sarah.

We also tried some new looks, including:

Having convinced myself I was fat before the sessions, and then having ten hours of wonderful looks, I went nuts at the end and after the makeup had been sand-blasted off of drab-me’s features, we both wolfed down a Papa John’s Pizza (one each), mine washed down with delicious beer. Which brings me to this lovely selfie:

Yeah, I’m drinking a strong BrewDog beer (Cybernaut) from the can with a straw, which is both amusing and galling in equal measures, but what’s lovely about this picture, aside from the beautiful and talented Cindy of course, is that this is Cindy showing me, a thirty year cutting edge technical guru, how to bleedin use the buttons on the *side* of the iPhone to take a selfie. I didn’t realise you could do that, so every selfie on Friday (and all of them previously, drab or Sarah) and been taking by me fumbling and juggling the phone to try and get the main button pushed down. That’s absolutely impossible when you have long nails on. Hence the smile in the photo – mostly down to wearing a lovely frock and feeling just gorgeous, but also ‘yay, new tech’….

Day two was even better for the selfies. This time Cindy went for a slightly more pink and colourful eye makeup and full, pink/red lips with tonnes of gloss, which were adorable and yes, a little sexy.

We did seven outfits in this session and the first one was a revisit to the dress I used as the ‘Banker’s Wife’ photoshoots. Every time we’d done this frock before, which I love for reasons I can’t put my finger on, we’d done it with a mature hairstyle, what I call the ‘Jane Fonda’ wig, which is great but I really wanted to see what Sarah looked like with her favourite hair-style wearing it. So much fun.

We also did an outfit was was much younger looking and, shockingly, two sizes smaller than the smallest size I thought I could fit into. This was a size 14 (!!!!!!) and yet it fitted like a glove, albeit and schoolgirl/preppie kind of glove. The selfie just came out beautifully cute courtesy of the superb lights on the new mirror. 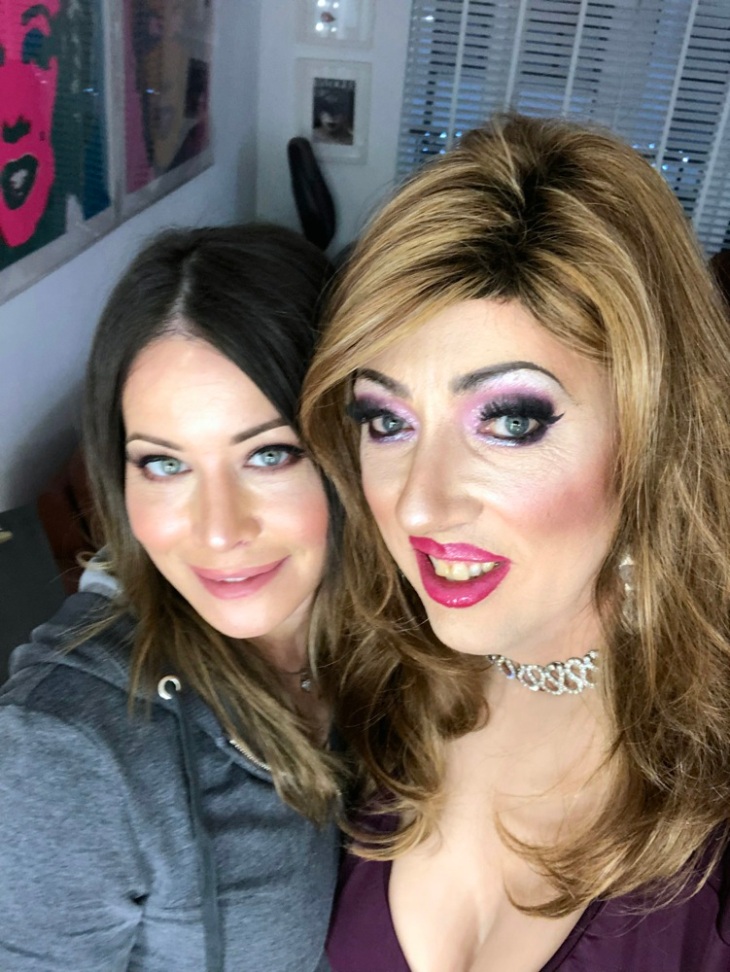 Course, I could never pass up a chance of some more selfies with the genius who created Sarah, so there she is 😉

Another visit from everyone’s favourite Russian Mail-Order bride, ‘Svetlana’, was on the cards for day two and I took a couple of lovely selfies of her. The featured image at the top of the blog is her with me going for the vapid/resting bitch face.

And then, like a flash, it was over. 48 hours of London time, 18 hours of playing dress-up, and it was time for Sarah to retire to her pink-themed flat in the back of the drab ones mind. The last selfie is a little sad for me because you can see what I, drab me, is feeling having just removed all the beautiful clothes, washed her makeup off, taken off the lovely long delightful red nails and returned to the realm of the normal.

And yeah, the stubble grows very, very fast on his face.

Anyway, I have one thousand six hundred pictures of a very happy Sarah in 17 different outfits, so I expect him to be happy. On the inside at least.

Stay beautiful, and remember that the person above is also the girl below.