It’s still hot. Which is mind-boggling (this is England, for heaven’s sake), and not a lot of fun. As previously mentioned I tend to not organise any dressing sessions for the high summer – there’s nothing less feminine than sweating under a corset, and silicon breastforms? Don’t even ask.

So I’m in that limbo period again, when the urge is seriously high but the Summer makes it impossible, and as per normal my mind wanders….a lot.

I’ve been planning the next session whenever not working, trying to stick to a strict diet (snort, not really, just exercising when I can stand melting in the heat, trying a fasting diet where I don’t eat between 18:00 and 12:00 noon, which really means I get seriously hungry and then pig out for the six hours I can eat…. not sure if it’s working but hey, I’m miserable, and that’s pretty much the same effect of all diets).

And I think I found *THE* dress. You know, the one that just jumps out and lights up all the girlie nerve endings in your brain when you see it. Not only that, it’s a Vivien of Holloway which means it is ultra popular, and, when they announced it was coming, I had 48 hours of frankly seriously feminine behaviour, constantly refreshing the website with my credit card in hand because I HAD TO HAVE THAT FROCK! Didn’t know I had that level of rampant female consumerism in me, so that’s a nice perfume-scented surprise. But I got it – a pink and white polkadot Kitty dress that is sooo gorgeous. Haven’t tried it on yet because a: I’m in serious drab mode as I’m a month and a half since the last Sarah time and a month to go, and b: I may have mentioned it but it has been so, so hot and flouncing around in 25+ degrees C would be inadvisable, To enjoy the frock to it’s best I need to be somewhere air-conditioned, shaved, face full of make-up, proper undergarments, lovely wig on. This frock deserves that.

Anywho, getting back to the point of this blog – I’m running on maximum imagination at the moment, trying to fight off the urge (which is so, so tough) and look forward to the next session. And part of this coping mechanism for having to be stuck in drab mode is I spend a lot of time perusing my pictures of Sarah – all 16.5K of them. Yeah, sounds obsessive doesn’t it.

But anyway, a long, long time back (we’re 98 blog posts in, two years down the line), I posted about names – how the name you pick for your other-other half is reflective, sometimes, of your experiences. I chose Sarah because the other five or so I’d tried didn’t fit or ended up with other meanings (I was Diana for a bit before the death of the People’s Princess, at which point it felt just wrong), and Sarah was the name of my very first girlfriend (back when I was pretending not to be asexual/hadn’t realised my gender was all over the shop). I did go through a phase of naming each of my looks with a different name that reflected, to me, the girl I was portraying.

And that was a lot of fun. So, to pass the time and stop me from going trans-insane I thought I’d try something a bit different. I’m going to re-visit a number of the looks I’ve done recently and give them names and origin stories, just for you. Well, not just for you, obviously, I get a kick out of it and it may give you a little glimpse into the mindset and thinking behind the looks.

I do plan a lot, perhaps way too much, and part of the planning of an outfit is I have a little backstory in my head as to what and where she is from. Here’s a couple for your reading pleasure….. 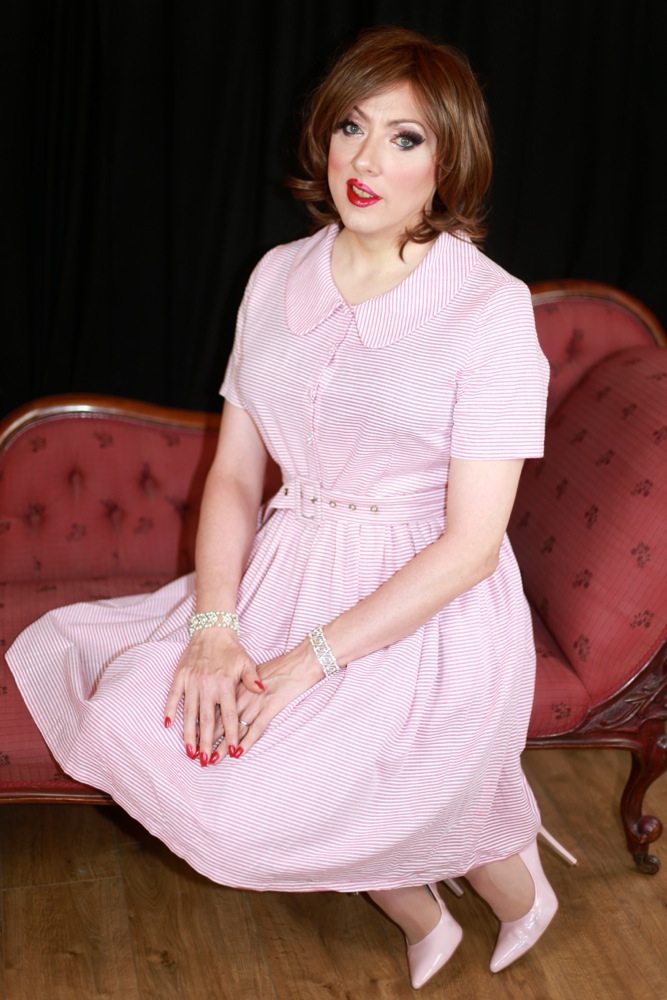 Pictured, a shy smile from the newly-wed Claire

This frock was an impulse buy from ‘Joanie Clothing’, a lovely site that does some different and very retro looks. The minute I saw it it tickled my fetish fancy, a Pink checked girlie frock that looked like a cross between a private School summer dress and something a new wife would wear to look, well, more wifey.

When I put it on, and we added a ‘stay at home mom’ wig to the mix, she just came alive. What I love about it is that I see a young wife who is getting used to the dynamics of being someone’s partner, and dresses the way she thinks is appropriate.

So this is Claire, quiet and a little timid, eager to please her husband but trying to find her place in the home. I’m sure she’ll come out of her shell after the first child….

2: “Isobel”, the mature trophy wife for a devious banker

Oh, I had a lot of fun with this one. I write novels (no, not trans ones, ones that are a bit different involving espionage, quantum mechanics and other mind bending stuff) and occasionally my imagination gets very much out of control.

I picked this frock up, again, from Joanie Clothing, and it struck me as being very pretty but very prim and proper. We went for the short hair look because it’s different, more mature, and it really makes you behave completely differently.

My initial idea was to try and make her look like the posh wife, someone who is on the arm of a rich banker or an executive, the slightly bitter woman who knows she can be better than her husband but will always be in his shadow.

And then my naughty fetish centre kicked in. What if it was actually a man who had defaulted on a loan payment, and the bank manager, a closet homosexual, fancied him as a woman? The scenario would be that the poor guy who had defaulted on his loan had to play the wife of the bank manager for a weekend’s corporate retreat, dressed very conservatively and tidily, interacting with the other manager’s wives while the men played golf, drank, smoked cigars and made sexist comments about their ‘little women’.

Yeah, some good old fashioned tranny-tropes in there but I loved this look so much and it really did feel like a banker’s trophy wife. And Isobel is one of those posh names you don’t hear often nowadays. So Isobel it was…..

We all know her in real life. The slightly cold, professional woman who has worked very hard in the cut-throat company of men who have been promoted beyond her, who now runs the office with an iron fist with perfectly kept red nails, who lets her short hair down once a year at the Xmas party but you’re too afraid to respond to her sexual advances because you know come Monday after the party she’ll be the ice-queen again.

I’ve worked with too many Dawns….

Course, her real name isn’t Chantelle – that’s a name she saw on a French pornographic film. Her name is really Samantha, but that’s the name of the wide eyed girl who came from the North, attracted by the bright lights of the big city, before too many years of good money and long nights trapped her in the role and life of Chantelle, the boob-job, the saving for the inevitable face-lift to keep her favourite punters interested, the cold mornings totter back to her flat in non-sensible heels for a shower and some sleep before the night comes around again. 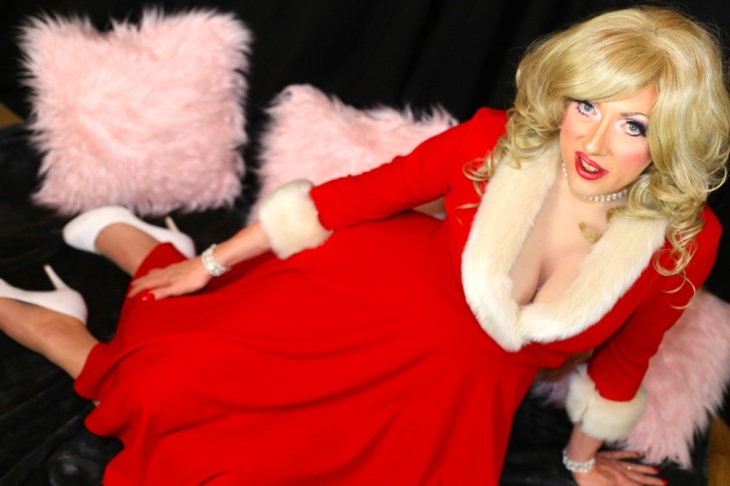 Bit of fact meets fiction for this one – I had a massive crush on a friend of mine during the 80s and she wore a dress very similar to this to an Xmas party where I was too shy to make a move on her. Plus, asexuality and gender confusion meant I didn’t know whether I wanted to spend time with her or spend time in her clothes.

So, fast forward 30 years and I tried to recreate her look by buying this gorgeous Xmas frock, and with the help of Cindy’s skills I almost pulled it off.

Turns out I wanted to be her. So I could lust after the ‘me’ version. Yeah, we’re a long way from healthy now but boy, it’s a lot of fun out here in the ‘love thyself’ zone.

Pictured – Vivien from Vivien of Holloway. I mean, me. Yes, me, that’s less mad.

So yeah, now we start to branch into odd territory (says the 49 year old man with 16.5K pictures of him wearing hundreds of different women’s fashions, so take that with a degree of scepticism).

I *love* Vivien of Holloway clothes. There, said it. Always have, even when I didn’t know (consciously) that I wanted to wear them. There’s something just joyously feminine about them, the 50s and 40s styles, and they are always so well made. They feel like quality.

Cindy has a retro style wig that we call the Marilyn, and it’s one of my favourite – tight blonde curls that just feel so delicious on, so when I got hold of a posh Vivien of Holloway frock (Taffeta Kitty) the only choice was the Marilyn wig.

Now, Vivien (of Vivien of Holloway) has a hairstyle that is very much like this, and she poses with her frocks on her Instagram and Social Media. And, blow me down, I look a little like her when I throw on one her frocks and the Marilyn wig.

A little too much, It’s one of those dark little thrills. We almost went as far as to pop over to her shop after closing time and take some pictures of me modelling the frocks in front of her shop window, but that was getting into Single White Female territory. Just a little. Still would have been fun though….

One can dream though.

Anyway, that was a quick tour around my mildly disturbed mind at the moment – I always get this way at the down point between sessions – call it my femm-biorhythms. Putting the imagination into overdrive helps.

Stay beautiful and true to whatever facet of yourself is currently in the driving seat…. 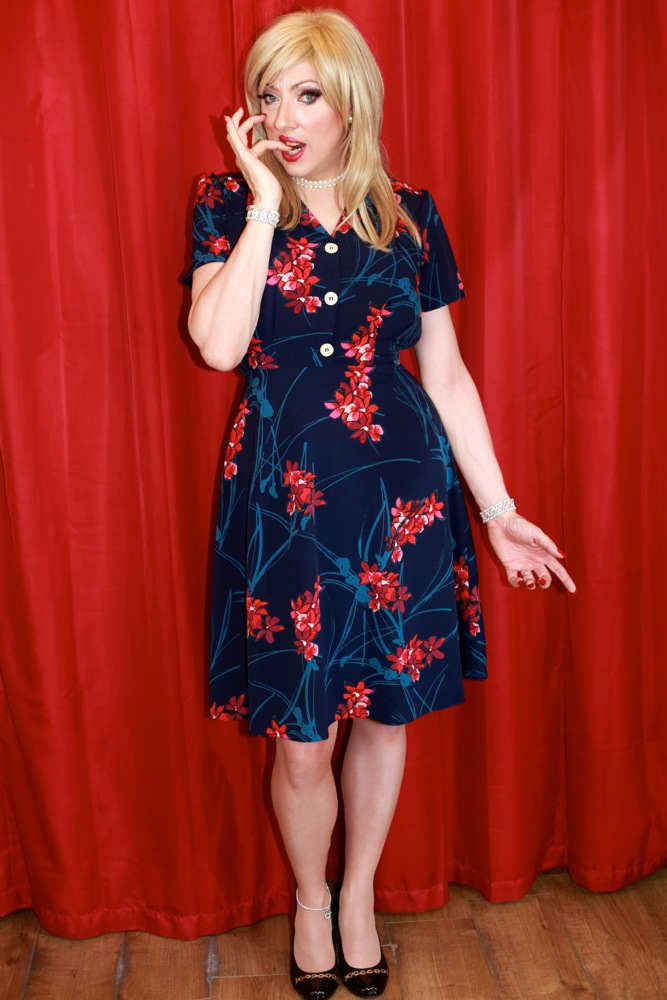 Pictured – me. Sarah. The real me. xxxxxx

One thought on “[Fashion/Fun] A Sarah by any other name would still smell of Chanel No.5”