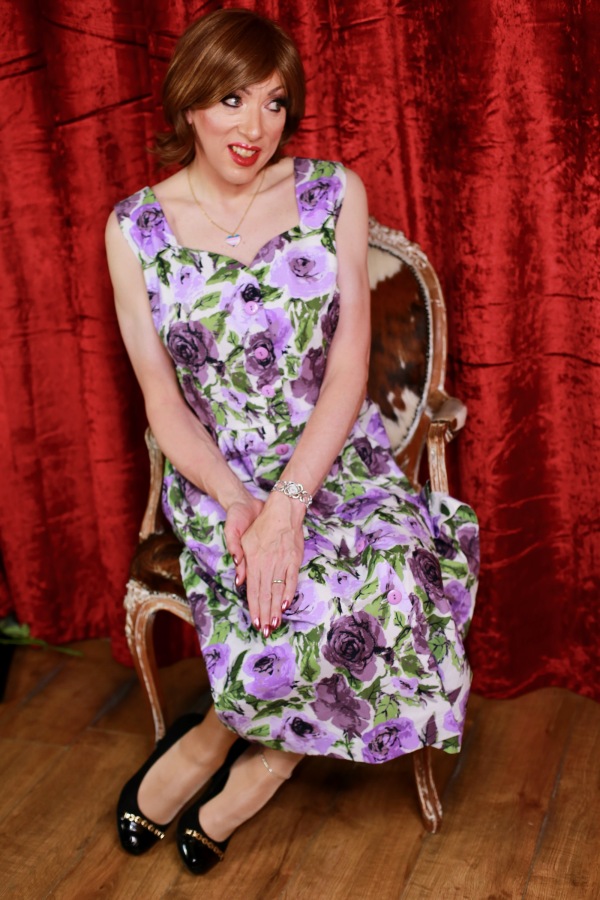 Damn, I got busy again. I even did another session as well, hence the quietness, plus I’ve been doing some intense physical training in the severe heat because, well, why not. Actually, I’m doing the Cancer Research ‘Night Shine’ marathon again in late September and, although I don’t need to train, I did 90 miles of cycling and 28 miles (in one go) walking in the 26-30C temperatures we had this week, so I’ve been pretty much out of my head with an amusing mix of heat exhaustion and, well, exhaustion.

So, I kinda slipped on my promise to do a load of these Frock Tales; consider me self-guilt tripped and here we go again.

But first, a little rant/moan. Maybe a little self-inflicted, but there you go. I put a fun Reel up on Instagram of myself posing, up close, in a glorious 1940’s hostess dress. I was expecting the usual reaction, which is fun; about a hundred or so people like it, ten or so comments. But instead this one went viral; currently stands at over a thousand likes. But with the extended visibility comes the inevitable trolling, and wow, did I get trolled.

They were obviously hacked and temporary accounts, mostly no-post and no followers. And they were odd comments, like fifty thumbs down emojis, or misspelled or non-English insults (although ‘f*kking fagat’ seems like it might be Danish?). Anyway I didn’t let it phase me; as I said in a previous post you will get trolled occasionally and, and it’s going to sound counter-intuitive, it’s ‘not personal’. I just did what you should do; block the account, delete the comment.

But it got me thinking on what these people actually get out of it. As a troll you’re not getting a bite (other than when someone gets offended and responds, which is what these bottom feeders want). And some of them just made me laugh – ‘It’s got a dick’ was particularly funny as was it meant to be news to me? I clearly state, in the account name and other wise (I put the trans-flag on almost all posts now) that the pictures are trans-related. But still, you’ve got to ask yourself what kind of person specifically looks for trans pictures to insult (clue; repressed homosexual). But anyway, I was a little amazed at how much the insults ramp up as the media becomes popular.

I did come to the conclusion they were hacked accounts; some had pictures and were, well, normal for a better word. But some were hilariously trollesque. One account had the tagline ‘Here for the hoes and legs’ which made me think of some backwards farmer somewhere with a tools fetish. Anyway, enough negativity, let’s counter it with a gush and a squee around one of the most wonderful frocks I’ve ever bought.

So, I grew up in the seventies; if you weren’t there and see it only through the rose-tinted glasses of auteurs like Tarantino it looks like it was a funky and fun place to be. It wasn’t. In England it was grey and depressing, a place where the 1960s hadn’t quite been the cultural wash that they were in the states. But one thing I remember clearly, and I don’t remember a lot due to an obscenely abusive childhood, was the sundress.

A simple design yet exquisitely feminine, open neck, long dress, often with ruffles on the barely existing sleeves. I used to periodically ‘borrow’ one of my mother’s sundresses that had been discarded in the attack and it was one of the many items of clothing that gave me that warm, delicious rush when I put it on. And a quick aside; I still get that warm delightful feeling when I put on women’s clothes – I used to think it was something sexual but then I remember I used to get it when I cross-dressed when I was seven and unless I’m the world’s fastest puberty victim that was way before any sexual characteristics developed. I think going through puberty sexually confused and, well, developing bits and pieces from both sexes (thanks God/mother’s addiction to alcohol and Valium) tied this wonderful rush into the sexual drive and et voila, no interest in physical sex but a massive attraction to the Woman’s section at Marks and Spencers… go figure.

But I digress – Vivien of Holloway has always been one of, if not my utter, favourites for retro clothes. Her stuff always feels, well, quality. Back when I was pretending to be a normal man/partner I used to buy dresses from there for my partner (and then be secretly jealous when she looked good). Now I’ve bought way too many frocks from VoH (I know, there is no such thing as ‘too many’) but she rarely changes designs, which isn’t a bad thing.

But a couple of months ago she announced a new frock, the ‘Betty’ sundress. Even the name was cool. So I eagerly did a pre-order (they sell out fast) as soon as they were announced on the website and promptly forgot I’d ordered it.

Fast forward a couple of months and I was literally packing my ‘bag’o’goodies’ for the session before last when the postman delivered a parcel from VoH; in the old days I would have caught fire with embarrassment as it is a bright pink package with VoH’s logo on it (scantily clad maiden with a ball and chain) but nowadays I’ve gone past caring courtesy of Covid related PTSD and, well, insanity.

Opened it up and wow; I hadn’t realised it came with a bolero which completely changes the look of the dress, but the dress itself, again wow, made my heart leap.

It was delightful. In addition I’d had my chest waxed (which, if you’ve read the previous blogs, went….badly) but by now the rashes and ingrown hair follicles had calmed down to the point that I could get away with a low cut dress – the sundress had the most wonderful square neckline that showed a lot of skin.

When I modelled it at the first session we went for a more restrained makeup look and combined with a ‘normal’ style wig I looked, well, like a happy, well dressed middle-aged woman in a beautiful floral sundress. Given I’m normally a miserable middle-aged fashion-blind idiot it was lovely to see someone better in the mirror.

I had bought a pendant that I wanted to try as well; I found a lovely trans-pride heart necklace that felt right. I combined it with the sundress and it was just perfect, a proud indication of who I am.

Nearly all of the photos from the first session have me with a massive wide smile on my face. That’s a genuine, from the bottom of my soul smile – I can’t adequately describe in words how good this dress made me feel. It was one of the those rare moment when you put on a piece of clothing and it feels like you were born to wear it. The way it hung on the shoulders, the way it flared out when I walked, it all felt natural.

I’ve noticed a lot lately that walking about in the real world wearing a pair of jeans and a t-shirt is feeling more and more alien. It’s an odd situation and something I need to think about in length; the clothes I’ve been wearing all my life are starting to feel like the costume. It could be just a mid-life crisis (another bloody one) but this feels way more ‘core’ if that makes sense.

And this dress highlighted that completely. I didn’t feel like a man playing dressup, I didn’t feel oddly uncomfortable. I felt completely at one with myself; in fact I had to drag myself away from the mirror to do the photoshoot and when we had got a good selection of pictures I just didn’t want to take the dress off. It was *me*.

Show a normal person a sundress and it’s a piece of clothing. For me this dress was something more, a second skin. And I found myself desperately wanting to *be* the person I saw in the mirror; no, desperately wanting is too small a phrase. I yearned from the bottom of my soul.

Not bad for a floral sundress.

In fact at the next session, which was very close as I managed to grab a cancellation and pop back in under a week (!!!) I took the sundress again and modelled it once more. It was so impactful I needed to wear it again, I’d spent the entire six days between sessions just thinking about the thrill I felt when I wore this dress. And it didn’t fail to work the second time either.

So this frock is now part of my surprisingly small set of dresses that I won’t sell. And, if at some time I crack and decide to discard the costume of masculinity I can see myself pottering around the garden in this outfit a lot. Yeah, it’s not modern but it ticks my boxes big time.

Anyway, enough gush and squee. I feel better and think I have enough energy to pop back onto Instagram and block/delete the obvious comments I will have received since I started typing with a wide smile on my face as I think of the sundress swish…..

Stay beautiful and if you find *the* dress enjoy it, you’re worth it. And don’t let social media tell you otherwise.