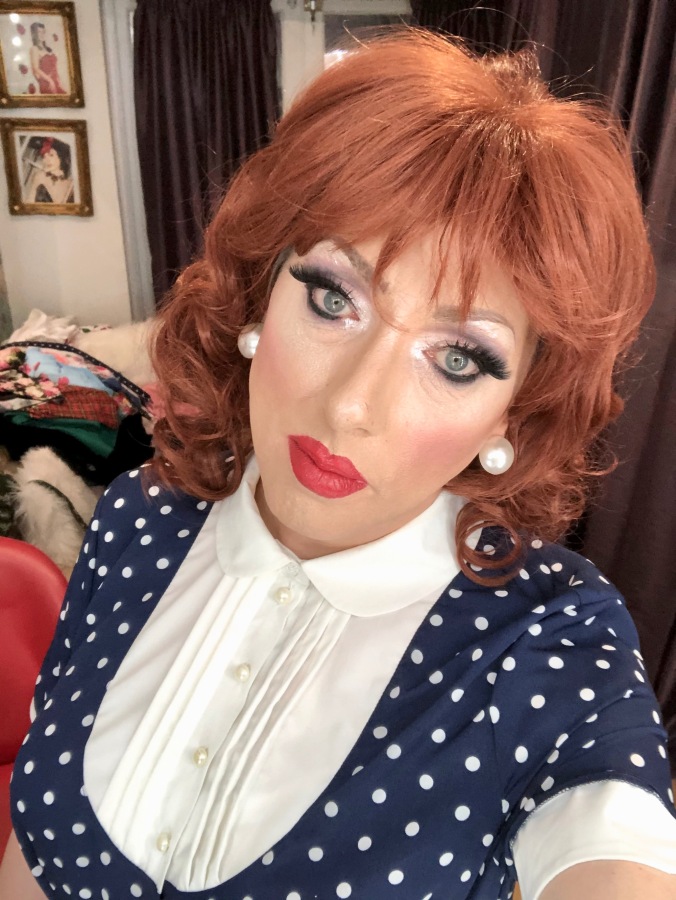 Hair. Men have it in all the wrong places, at least wrong if you want to dress and present yourself as a woman that is. It’s the one thing that drives me nuts when I want to have some Sarah/Julie time, the shaving.

I’m not a good shaver. Not by a long way; I’m too impatient, I don’t know which way you should shave (against or with the grain?), and I’m constantly angling the razor the wrong way to get to that one little bit that is always a nightmare to remove (for me it’s the bit right at the corners of the mouth, and the tiny patch right under the nose – try as I might I have managed to slit the lip and the nose on many occasions, leading to swearing, bleeding and panic that it will show under my makeup as a scab).

In addition the hair, at least the body hair, is kind of a ‘get out of femm jail free’ card. My subconscious was always ‘well, I’ve never shaved my back and I only remove the hair that would show in a photo’; the reason was something a little deeper, the shame (yeah, yeah) at my hobby being slightly tempered with the ‘but I’m still hairy underneath so I’m kinda still a man, right?’.

But, if you’ve been reading this blog, you know there’s a huge amount of catholic-style guilt going on in my head, which, if I think about it, is an odd thing; I’ve never explicitly been told that dressing in the gender I’d like to be as opposed to the one I got (again, kind of courtesy of late 1960’s medical protocols) is actually bad, I’ve just listened to the homophobic/transphobic people I grew up with and around espouse about the failure of a ‘man’ who wants the softer stuff.

So, I’ve never, since puberty, shaved my back or my lower chest. But lately, courtesy of Covid and a change in my relationship status (wow, even Facebook has slid into the subconscious), I’ve decided that the bits you can’t see in the pictures need to reflect the inner me a lot more.

First attempt, for the last session I did, was a full manual shave of the chest. First time since puberty my chest was bare and it was, well, delightful. I felt clean, I felt femm. Sure, shaving was a nightmare (horror thoughts of accidentally cutting the nipple area sat on my shoulder for the full twenty minutes it took to hack off all the hair) and, because my body is uber-reactive, I had stubble within a couple of hours, but it felt, well, right.

I didn’t do the back because my arms don’t bend that way; my ability to hack and slash shave combined with bending arms at angles that would encourage me to turn my back into a painful chopping board, meant I didn’t have the guts to do it.

Shaving the chest was great though, although within a couple of days sleeping was fiddly; the chest started to feel like a tiny pin cushion and my arms were getting a rash from the prickling of the hair follicles against them at night.

So I took the step, this last week, of going to a proper beauty parlour and have a full chest and back wax.

See, I have sensitive skin; I’m constantly having to be careful around the cats as I get hives if I rub up against them for too long, I’ve prone to acne. I’d read up a little bit on waxing and people said how wonderfully soft and sensitive it makes you skin. And the more you do it, the finer your hair becomes.

My hair is pretty coarse and very black, so I had a dream that I’d have a wax and et voila, everything would be fuzzy and delightful.

When I got there I was nervous; my chest hair was about 3 or 4 mm long but my back hair was a rug, untouched for 30 years. The attendant was pleasant, although she told me she would be a little intense with the waxing as she was a perfectionist. I lay on the table, on my back at first, and took a deep breath.

Everything you read or see about waxing cannot come close to the pain. I’m pretty good when it comes to pain – when I blew my back I had 37 nights where I had no sleep because of the excruciating nerve pain and I got used to that. But this was something else. You get a warm feeling when they apply the wax, and then they lay the strip on top, which feels like a snuggly bandage being applied. And then they wrench it off quickly. It feels like a thousand ants instantly sting you; the pain doesn’t last but it’s a flare of heat and pain like an intense hot itch. And it just goes on and on.

The chest was the worst. At least until we got to the back. And then I discovered that the chest had been a breeze.

See, the back hair was long and the attendant said it would be easier to wax; easier was a term I misread. It was easier to wax because the wax could get more of the hair at once.

I have an amusing reaction to intense pain; I used to have deep muscle massages to deal with damage to my shoulders and legs from over-exercising, and there was a point where the pain got so intense that my mind would make me laugh uncontrollably. Instead of screaming or squirming I get the giggles.

With the back I was laughing constantly.

It took about thirty minutes of this wax, tear, exquisite pain before she finished. And then, because she was a perfectionist, she spent five minutes plucking the ones she hadn’t been able to wax. That was torture.

When it was over I pulled on a t-shirt, gingerly, and listened patiently as she explained what I should and shouldn’t do for the next 24 hours or so. I kinda didn’t listen, because my entire torso was humming with heat and a little pain.

I got home and had a peek in the mirror; it was smooth but red and inflamed. I was chuffed with the effect and, aside from the pain of the moment, it seemed easy.

Fast forward overnight and, well, it had gone somewhat wrong.

When I got up the next day and looked in the mirror and, well, it was somewhat of a shock. I looked like I had terrible measles. My chest and back were completely covered in red, swollen spots. Every single one of my follicles had reacted to the wrenching out of the hair root. It didn’t feel smooth; it felt like the surface of the moon.

I applied Aloe Vera liberally over all the effected areas and got on with work; it didn’t itch and I put it down to ‘it will be better tomorrow’.

The next day it was worse. Almost all the red spots now had white heads on them; it’s a guilty pleasure but I’m one of those people who likes to investigate these body related things, so I stood in front of the mirror and cleaned them all up. It now looked like I had shingles; from the neck to the groin it looked like very bad acne.

That was Wednesday. It’s now Sunday and as I sit on the bed I can feel the itches badly; the back is the worse. The front is starting to look a little better but, and this is the irony of it all, the hairs are starting to regrow. I guess it would have felt smooth if the entire skin surface hadn’t erupted in swollen spots, but I’m starting to think that when the lumps fade it will be just in time for the stubble to return.

Well, you need to try these things once I guess. I booked another session for six weeks whilst I was there, before it started to look like I’d been shot with an air-rifle/shotgun. I’m in two minds; the next session was going to be *everything*, chest, back, arms and legs. I can only imagine that would be an exercise in pain followed by being the Elephant man for a week.

I haven’t tried cream; ironically I was worried about a skin reaction (well duh), but the nice thing about having this bad a reaction to waxing is that I know what a reaction looks and feels like now, so I may well try it.

Anyway, that wasn’t very femm but I thought it was worth sharing; a friend of mine says that I should try laser and just get it over with but I’m not quite there yet. Waxing was a massive step – if I’d told younger me (say 20, 25 years old) that at some point I’d have a full body wax he’d have been appalled, so there’s a lot of changes in my mind set that I’m happy and comfortable with.

And to be honest, as the lumps fade, it does look very good. It’s just hard to feel femm when you look and feel like a leper.

We’ll put this down to a strange interlude; I have my next session, weather permitting, on the 10th July. I’m hoping that the rash goes down by then (of course it will) and I may have to tidy it up with a touch of Nair. Maybe laser isn’t that bad an option (although, as my friend told me, it’s WAY more painful than waxing)….

4 thoughts on “[Philosophy] Wax on, wax off, scream, repeat”