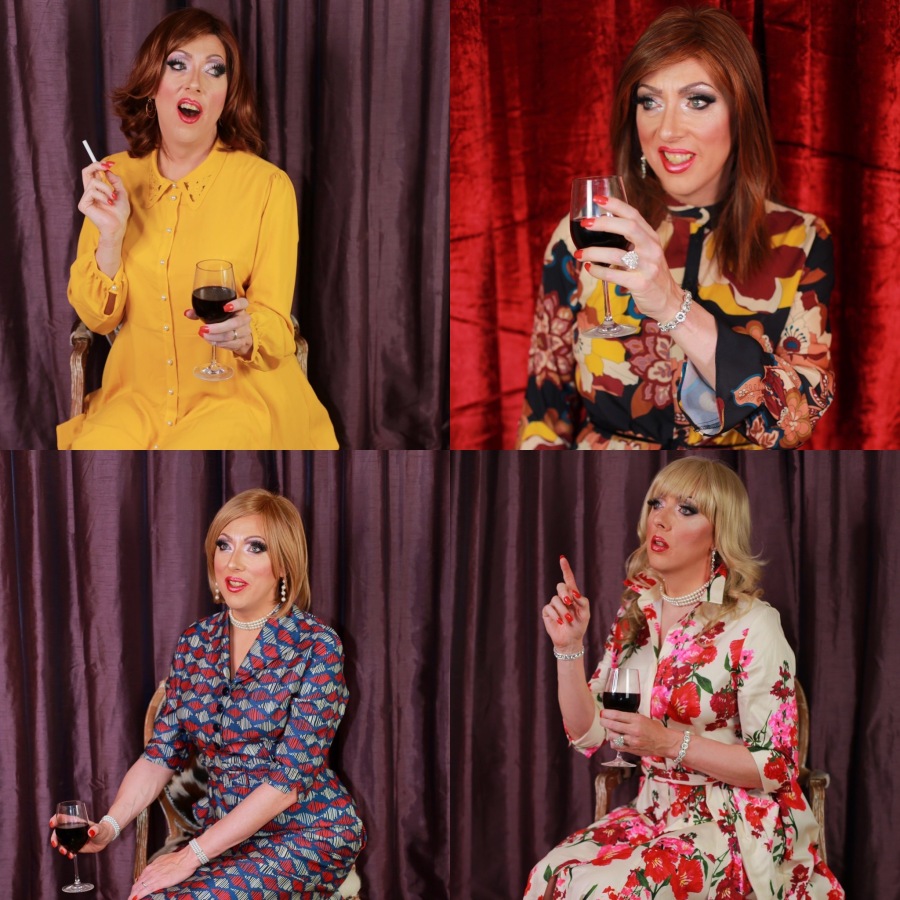 Alcohol. Pretty much the cause of every one of my more entertaining tales over the last, well, to be honest, thirty-nine years. Yeah, we start drinking early in Bristol; I actually quit drinking cider when I was fifteen after literally crawling half a mile home after ten too many Woodpecker ciders (or was it Diamond White? My brain is a bit of a blur on that for the obvious reasons).

Anyway, and to be completely honest, I tend to take a can or eight of decent beer to my sessions of dressing because, well, I am still nervous. I get terrified waiting at the door, I get terrified when the makeup is done (what if someone comes to visit Cindy, what if there was a fire, what if, what if) and a couple of cans of decent beer take that edge off.

Problem with beer and all delicious, delicious alcohol is one becomes two, two becomes four and four becomes wandering around Edinburgh at 2:00am in the morning before being hit by a car, and then freezing to the pavement, having the police find you, having the police chip you off the pavement and call an ambulance, fighting the police because your paranoid mind tells you they are in disguise and you are being kidnapped, being handcuffed to the stretcher, posting a picture of yourself handcuffed to a bed in casualty at 3:00am with the tagline ‘HELP I’VE BEEN ARRESTED’. Yeah, that kind of escalation that is so much fun, cough, with the aid and cause of alcohol.

But, as per normal, I digress. A lot of my pictures from the sessions have Sarah wielding a glass of something and, and I hate to break it to you, it;s often a prop. To be honest, mixing nervous men in beautiful clothing with glasses of real red wine is a recipe for utter disaster, so intelligently Cindy has a couple of mainstays in her prop box that I love to play with.

Thing is, if you sniff the red wine glass, and, as a fully functional raging alcoholic it’s pretty much the first thing I do, it *does* smell somewhat of a gentle Merlot. No idea why.

Anyway, I have a tendency to want to see Sarah with a glass in her hand, partly because I can write a deliciously innuendo filled tagline for the picture, normally involving her date, how many drinks it takes for her to get amorous, all the usual.

It also gives a great prop for practising the hand positions. In one of those mad ironic situations I’ve spent a huge amount of my adult life focusing on not having limp wrists; it was a dead give away when growing up and the source of merciless taunting and bullying if you were seen with a delicately angled wrist, so the terrified part of me makes sure I always have the most masculine of wrist positions. Which is very silly, if I may so myself; the effort it takes to keep the wrists from wilting is unnecessary and a throwback to a scared gender-confused child.

Anyway, holding a wine glass is a perfect way to practise that gentle way a woman’s wrist seems to work. And, if I may say so myself, I’m pretty good at it. In fact it feels natural, which is oddly thrilling and worrying in equal measures to the woman in me and the man in order.

On the subject of alcohol – I need a lot of it in order to get the courage to go out and about as Sarah, which I haven’t done, courtesy of Covid and the lack of backbone, for way too long. The nature of the world right now means that there isn’t anywhere to go to, at least that would be any fun. And the irony is the necessity for masks makes it far easier for us wanderers of the pink highway to pass.

For me, growing up, the woman’s toilet was the ultimate no-go area. You’re brought up with strict instructions to stick to the biological definitions when it comes to voiding waste, and it’s deeply ingrained. When I first went out I found it impossible to cross the threshold, which led to some interesting moments; these women who are afraid that allowing a transgender into their ‘safe space’ have never considered the options we have; to go into a male bathroom fully enfemme is literally taking your life in your hands. Whether it’s a closeted, male-hormone angry hater who will take great offence and respond with violence or just verbal abuse it’s a hostile environment.

For women the fear that a sex-crazy man in a dress will lurk in their safe-space is a horribly old-fashioned and out of date British view on cross-dressing. Either way, I found the idea of just crossing the threshold terrifying, even after the copious amounts of alcohol downed to allow me to be Sarah out and about (and the reason for needing a pee desperately).

I ended up using the women’s toilets at the WayOut club but that was kind of a copout as *every* person in that toilet was a T of some sort. Although I scurried in like a frightened mouse in heels, locked myself into a cubicle with a sigh of relief and then had to fight the five layers of under-garments I had on to reveal the little hose.

I don’t know what was more amusing at that point, the realisation that sitting down to have a pee with a corset on actually restricts the bladder and stops you peeing, or listening to a couple of Thai ladyboys describe in broken English the best way to stop a man from ejaculating during oral sex. Neither of those two was conducive to getting the excessive water out of my system.

Anyway, my point, if I ever had one, was that it is a fine and amusing line for me to walk between having enough Dutch courage to totter out as Sarah (and believe me, I need the Dutch courage; I barely have confidence being out in public in drab, being wrapped in a frock, on high heels and with a kissable face doesn’t add confidence, it moves me so far from my comfort zone I can barely remember what it is like to feel safe) and having way too much Dutch courage.

What’s interesting at the moment is, because of the silliness of Covid and the like, when I do a session, and going out is out of the question because of the lockdown/restrictions/everyone I love to spend time with are locked down in various places in the UK, I drive into London, and that means absolutely no alcohol other than the plastic props.

And that has an interesting side effect; I use alcohol as a crutch *during* my sessions, or I did, and now I’m doing the sessions completely stone sober. This is a great and a not so great thing; great in that I appreciate the whole experience, not great in that the fearful child inside, of no discernible gender, is very much front and centre in my thoughts as I dress and pose.

So, yeah, the whole wine stuff was an excuse to show off some sweet and cute pictures, but post Covid I suspect there may well be some sober Sarah out and about adventures, and I’m gleefully worrying already as to how scary that will be.

Stay beautiful, stay sane and stay true to the little sweetie inside you.