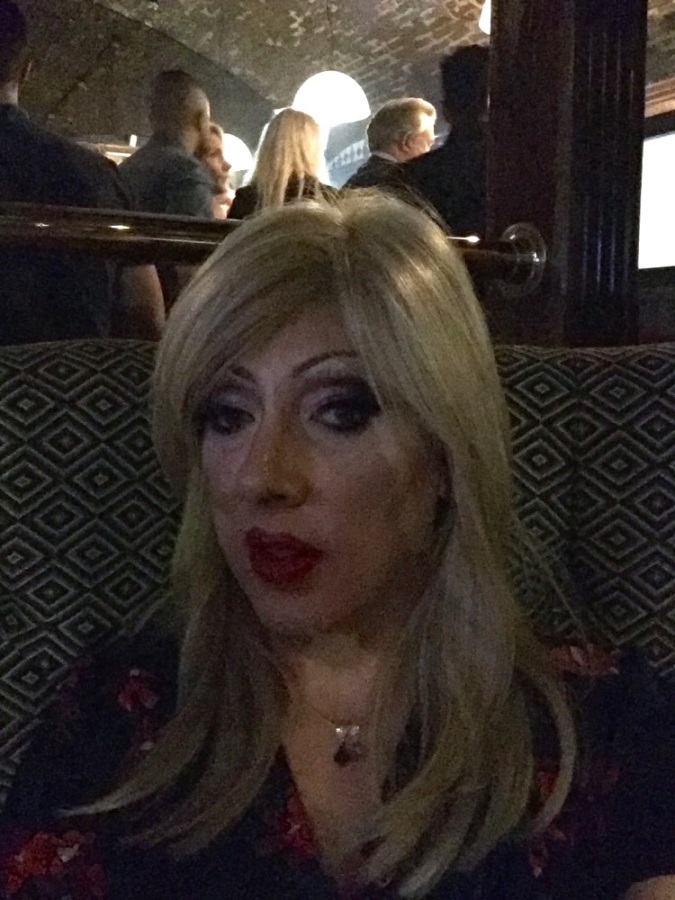 Week seven of lockdown and I thought the best way to counter the rapidly growing feeling of wall-climbing and anti-agoraphobia would be to revisit and talk about Sarah’s forays into, ta-dah, the Real World (C).

I know I’ve talked about it a lot in various blog-posts but given I’ve been sat on my bed for going on for two months on and off (not actually true, we’re allowed one exercise session outside a day so I’ve been insanely cycling to counter the encroaching madness of cabin fever – 179 miles of cycling in the last 19 days to be precise) I’m thinking a lot of what I’ll be doing when it gets better.

Yeah, a lot of it is fantasy, but right now that’s all a lot of us have. I can’t dress at home, mostly because I have the make-up skills of an angry chimpanzee with a pack of felt-tips, but also because I have an unsaid agreement with my partner about the whole dressing thing. We don’t discuss it. Which makes it difficult to spend days swanning around the house dressed and acting as a 1960s housewife. Hence the cycling. 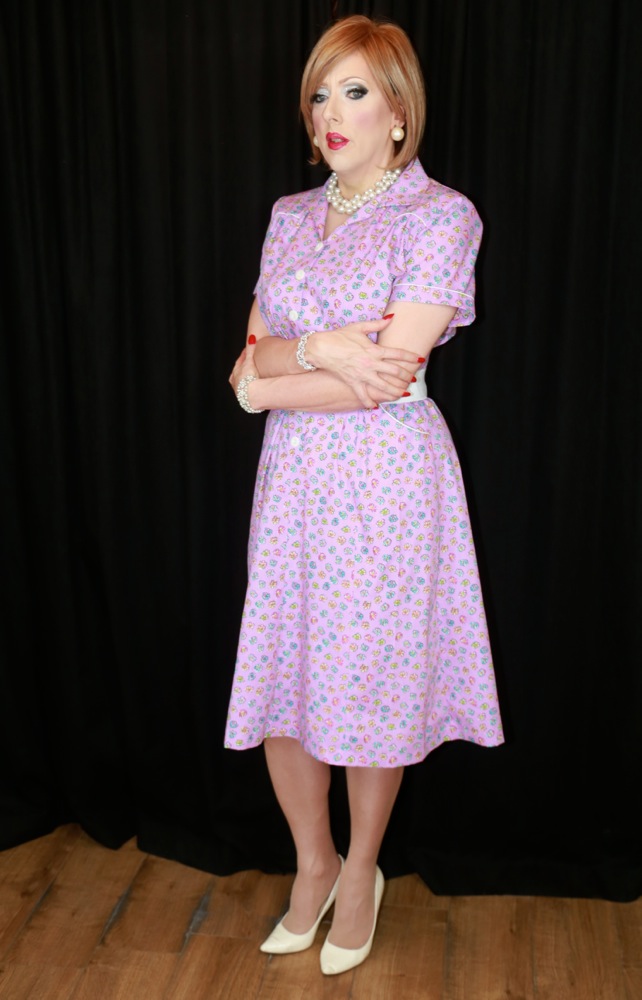 In fact, if the lockdown starts to lift in, say, mid May, it would have been six months since Sarah last had a flounce in a petticoat. That’s 1/102th of my life. And it’s the latest bit.

And in the absence of being able to be outside full stop I’ve been thinking a lot of how much fun it would be to get out and about in heels and a dress.

If you’re a regular reader you’ll know I am really, really terrified of being out and about as Sarah. And these seven odd weeks of introspection time have given me a long while to think about just why that’s the case.

Pictured – the absence of jeans and stubble makes me feel naked

I have no confidence at all in my ability to be out and about as a woman. There, said it. But it’s not just as a woman that’s a problem for me. I feel exactly the same levels of terror, anxiety and social awkwardness when I’m out as drab-me. It’s just drab-me has way more experience and coping mechanisms for being out in the ‘wide world’. Mostly alcohol and various prescription medication. And years of getting used to the worry at saying the wrong thing, making eye contact for just the wrong amount of time, knowing what to say or more importantly what not to say.

With Sarah it’s completely different. All of the skills I use to be able to be out and about are around how he *looks* and behaves. I can’t use any of those when I’m tottering along a London street at just after midnight, the wind whipping my skirt around my stockings, my hands held tight against me, normally around the strap of a handbag, the feel of long nails alien (yet oddly and greatly thrilling).

Now I have friends, some lovely ones, who do this ‘out and about’ a lot. In fact one friend, who will remain nameless to protect her from daft questions as to how she could put up with being out and about with a drunk social-inept such as myself, has been graceful enough to go out with me. I haven’t been brave enough, yet, to go out with her enfemme, but going out with her has allowed me to see how natural some people can be when they are being themselves.

And that’s the crux – I really, really want to go out and about as Sarah and enjoy the experiences that that entails, but it would always be as a man dressing as a woman. My friend *is* a woman and that difference, and confidence, shows.

So why am I thinking about spending more time out and about once this all blows over? Because I didn’t realise how much I wanted to do it until I physically couldn’t.

I’ve been out a grand total of five times. And the odd thing is that looking back my courage has actually got less and less as time has gone on. First time out was a whole afternoon and early evening, out with the Adam and Eve girls on a Brick Lane visit. I drank in a pub with three other girls, did some window shopping, had an Italian meal (where the waitress, bless her, called me ‘madam’ all evening).

Pictured – still love this style of frock, even though retro now floats my boat

I had a lovely little understated red dress on, black heels. I started the afternoon with nails but found them impossible to deal with so I took them off. It was a comfortable afternoon and looking back I can’t imagine doing that now. Where on earth did the courage go?

Second time out I did a Wayout trip. That one I did with my best friend escorting me – I’d revealed ‘Sarah’ to him a couple of weeks earlier and he wanted to meet her. I spent all night holding his hand (nothing to read into that, I was utterly terrified and having a ‘boyfriend’ meant that I wouldn’t get approached).

Pictured – the exact outfit and look I wore, retro and Betty Page

Third time was another Wayout, this time with two other girls made-over by Cindy at Boys Will be Girls. One was a girl from Belgium who had done a lot of outside dressing and was ultra-confident, the other was a quiet but very pretty dresser from the states who had never been out. I ended up sitting in a booth with the American which was more terrifying than before, partly because admirers kept coming up to hit on the American. I had a gorgeous blue lace short dress on, the bodycon look that a lot of women favour nowadays, and during the evening I had my bottom fondled a number of times. I’ve talked about that night in detail but I don’t think I’ve ever mentioned that the hardest fondle I got was from a GG which was….confusing. 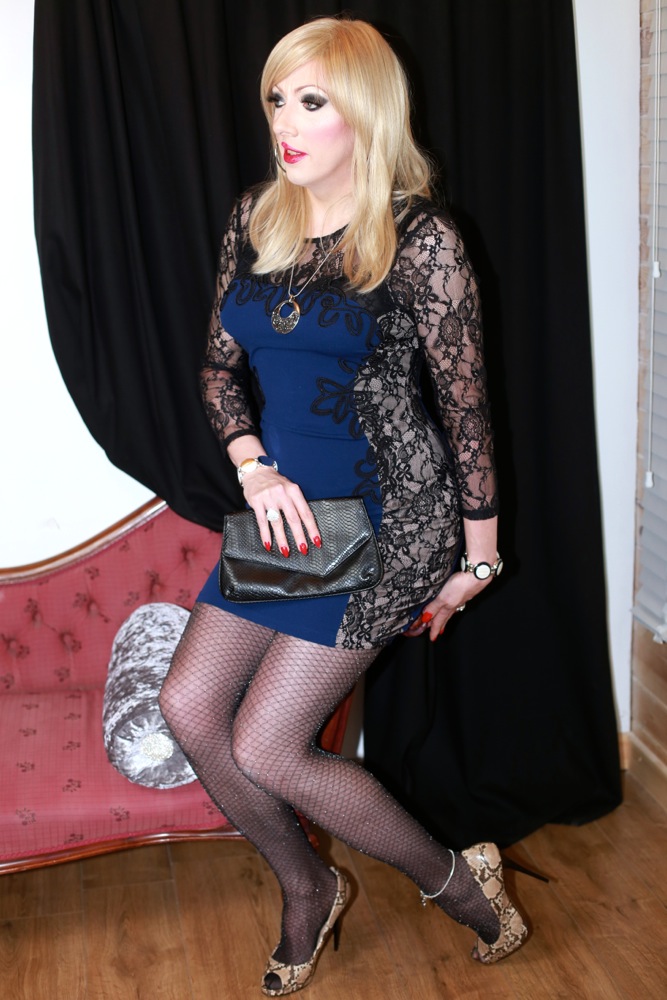 Pictured – this dress. I got fondled four times. Men, eh? Oh yeah, and one woman.

Fourth time was torture garden. That was a lot of fun, still terrifying. First time ever in an Uber which was mildly entertaining as I was wearing a tight PVC high collar fetish dress and very high heels. Getting in and out of a Prius when you are 6ft2in to start with before heels and wrapped in very tight fetish-wear is an artform I have yet to master. Also, once the night was over, or at least my courage had run out and we called for an Uber, I ended up tottering down a street in Vauxhall past a number of groups of drunken men.

Pictured – the perfect outfits to be walking up and down a London street at midnight waiting for an Uber. An actual picture outside the club. I get terrified just looking at it.

Fifth time was Wayout again – the picture at the top of the blog is a selfie taken from a booth there. I actually really love that picture because there’s Sarah, and then behind her there are men queuing at the bar and a woman. I love the contrast. But anyway, that night was the one where I got to see just how threatening an environment like that can be for women. An obvious drunken self-hating admirer asking you if you have a cock kind of destroys the gentle moment of being out and about as a girl.

Pictured – going to be honest, if the roles were reversed the first question I asked her wouldn’t be ‘do you have a cock’.

And that’s it in terms of the out and about. Five experiences. And I can look back and think ‘bloody hell, did I actually do that?’. Just thinking about them gives me a mixture of thoughts – equal parts ‘what the hell was I thinking’ and ‘I really, really, really want those experiences again’.

And the reason I want those experiences again, even though they terrified me at the time, I worried massively in advance of each of them and I’ve done nothing but dissect and decry them since, is that I didn’t get to enjoy them. And I know now, after this lockdown has lifted and I now understand how much fun this should be, that I would enjoy them a hundred times more if I just got a chance to do them.

Interestingly I intended at the last session, which I missed because I had a virus which could or could not have been Covid, to go out after we’d finished. I was going to step outside of the Boys Will be Girls sanctuary, by myself, and go for a walk. I wanted to feel the air, hear my heels clipping on tarmac, and just be Sarah in the real world. It would have probably been only ten minutes at most but I was soo looking forward to it. And now, after six months, it is on my mind nearly all the time.

And while we are on the subject of being outside, we do a lot of pictures at Cindy’s in her little garden, next to the studio where we take the photos. It’s a nice little patio with a table, but it’s overlooked by loads and loads of flats. Every time we do a picture out there I’m terrified that someone will call out, that someone is looking down at the ‘woman’ in vintage clothes posing in a chair or standing, nervously looking at the windows. I have absolutely no idea why it terrifies me so much to be out in the fresh air in the sight of people I don’t know or will never meet. And to be honest, I don’t know whether it is terror or a thrill.

But that’s the subject for another fun blog at some point in the future. Right now I can’t stop thinking of when they lift the lockdown and I can go find my inner-girl-strength and venture out into the world. Hopefully they won’t mandate masks as that would mess up my lipstick…..

Stay beautiful and try to stay as sane as you can. And find something to look forward to, something different, something that will make you happy and appreciate the freedoms you will get back. 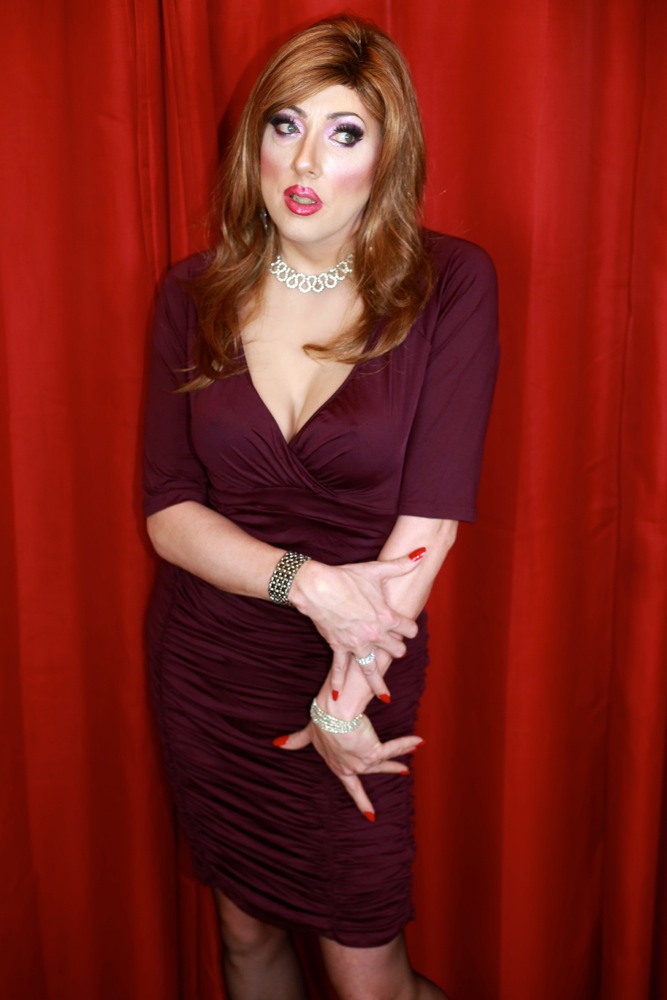 Pictured – honestly? I miss Sarah so much it hurts.

5 thoughts on “[Fun] The Grea-T Outdoors”