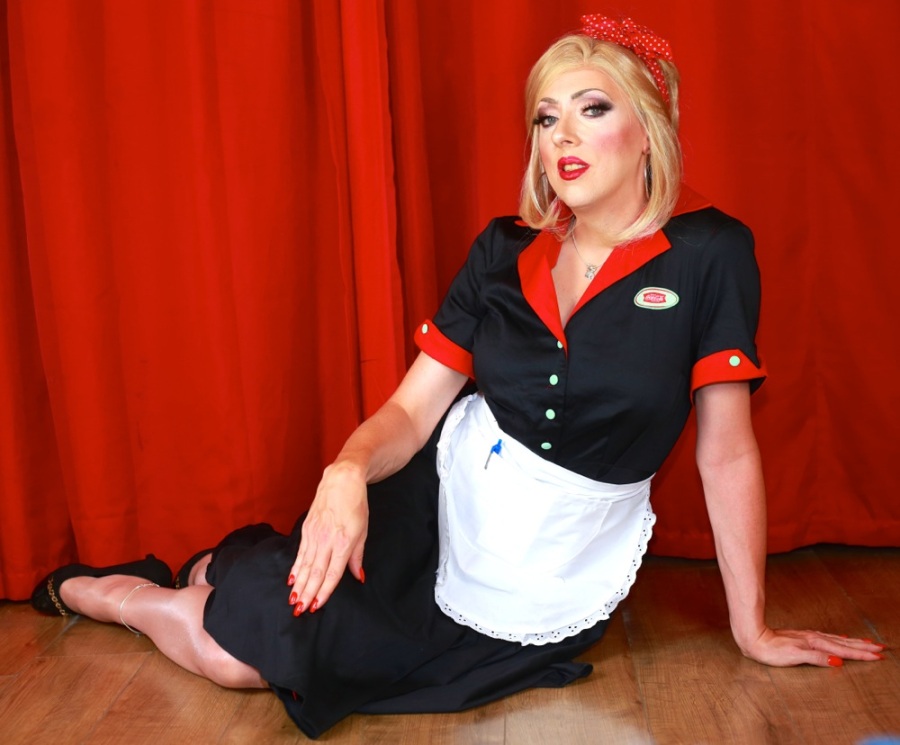 I hate January. Well, that’s not strictly true, I love Winter, where you can put clothes on, as opposed to Summer, where you can’t take skin off, but in terms of mental happiness January is a pisser in a lot of ways.

Chuck in political and societal instability and the interesting spectacle of democracy imploding (I’m looking at you, America) and it’s a dark time for most. I tend to get insomnia around this time of year and whilst on one hand that’s quite fun, giving a lot more time to surf the Social Media sites I inhabit as Sarah, on the other hand it encourages, sigh, thinking.

Pictured – where the thinking is ‘just how bloody long is it before I can wear a pair of heels again?’

But don’t worry; this one isn’t a dark trip down Guilt Lane but more an understanding I’m starting to get about the nature of my situation.

I’m not Trans. That’s not a gloat or a sigh you hear, it’s just a statement of fact. I’ve convinced myself that Sarah, whilst representing a better part of me, isn’t actually me, and I’ve come to the conclusion that there are two distinct states of my personality, drab life and Sarah life.

But that’s not quite true, and hence the title of the blog post. I’m starting to realise there is a third state, and that is, gasp, a comfortable Sarah.

Pictured – Spoiler, comfortable Sarah likes to dress like this

So let me try to explain. 98% of the time I’m him, the fifty year old over-under-achiever carrying so much emotional baggage it’s put my back out. The other 2% of the time, which seems a lot more but when I look at the actual hours I’ve spent tottering around on heels it’s tiny compared to the real-life ™ ‘fun’ of drab-wear.

But when I’m her I actually find it splitting into two vastly different people. One is the woman who tries on all the ‘sexy’ stuff, the bodycon dresses, the lingerie, the ‘northern lass’ wear of barely covering the tops of my stockings and revealing ample (false) boobage.

Pictured – Well, fun is an interesting word but you get my point. Also this outfit was catastrophically cold. For reasons I can’t nor should you put my/your finger on.

And that one is fun, don’t get me wrong. But I’m *never* comfortable. As I’ve said before that part of Sarah feels like art, similar to what Cindy Sherman does as a GG. It’s the ‘what-if’ Sarah, what if she was a club goer, a party girl, a temptress, all the things diametrically opposed to the person I’m stuck with in real life.

But then I find a look, a dress, a style that flatters and, well, feels comfortable. This has happened a number of times and being honest, I find it uncomfortably comfortable. It’s too easy to imagine getting up in the morning in real life ™ and slipping one of the maxi-dresses that does it, or a comfortable Viv Kitty, and going about normal life wearing it.

Pictured – far too easy on so many levels. Alcohol is my go-to drug of choice most days

And that’s when it occurred to me, as I was lying in bed at 2:00am one morning thinking and planning what outfits to take to my next session, that there’s a third personality hanging around. One that is not an art form at all, but a quiet little reflection of an actual what-if.

I used to get it a lot when I was surreptitiously dressing back in the ‘good’ old days. If I had the house to myself, because the parents had gone out, I’d sneak a little lipstick on, clip on the padded bra and slipping something demure on, maybe a Laura Ashley frock (man, those were the best in the eighties, just enough class combined with floral flounciness) . I’d get the usual confused rush of emotions, and most times I’d masterbate, coming to a guilty climax and taking off the outfit as soon as I did. The climax was like a light switch, feeling instantly guilty and not being able to take the stuff off quick enough I split my lip many, many times by rubbing so hard to get the thin layer of red lipstick off that I made the lips go red with suffused blood, and then I’d rub hard some more thinking it was the remnants of the lipstick and being terrified someone would spot it. In reality the split lips got spotted much more, never got outted by red lippy. 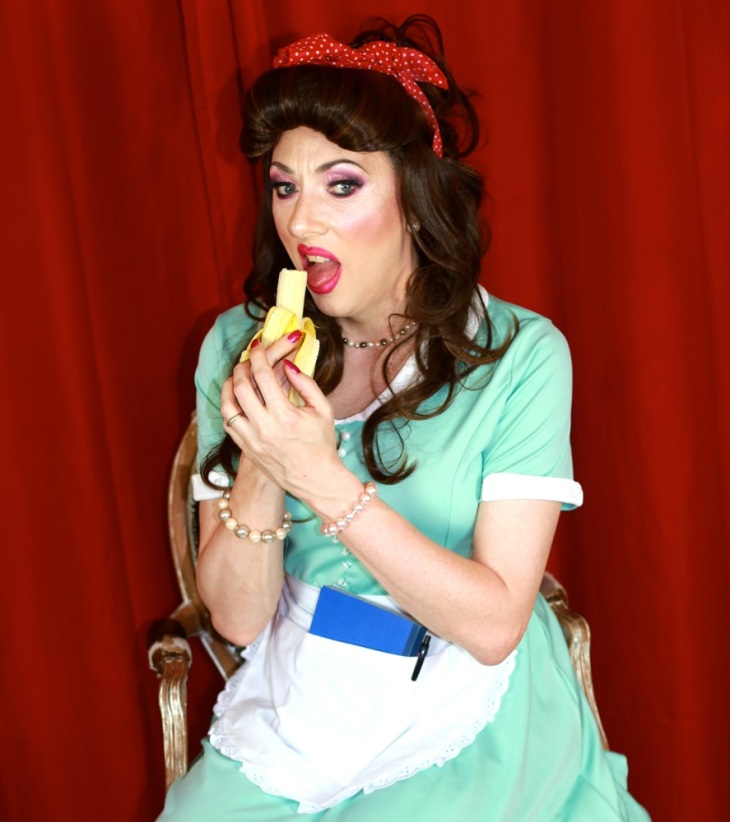 Pictured – and there are other ways to get rid of lipstick. Such as eating a banana. If you thought something else shame on you. And well done.

But when I didn’t post-puberty entertain myself but instead, if there was a couple of hours or, God willing, a whole day, I’d spend more time just *being*. And after thirty or so minutes a change would start.

This change used to terrify me and thrill me in equals measures. The clothes stopped feeling wrong and started feeling, well, right. Completely right. And my mannerisms would relax, my anxiety would go away. I could feel myself almost merging with the clothes, the clothes influencing me and changing me somewhat.

It wasn’t a sexual feeling as such. It was just this gorgeous warmth and feeling of rightness. In those instants I knew, subconsciously, just how much stress and effort it was taking to keep the facade of masculinity up. Even back then, from age seven onwards, I’d get these moments.

I put it down to an overactive imagination because, you know, I was a boy. The external genitalia, heehawing voice level and spouts of occasional rage seemed to point to that.

But I also developed breasts back then which was a little (correction, totally) uncomfortable, from the quips of class mates to the non-understanding ‘jokes’ of my parents. A little extra hormones of the masculine type and that went away, but all in all I got the feeling that the body and mind were trying to tell me something.

Fast forward forty years (and hell, it hurts to even type that) and now, when I can effectively be Sarah whenever I can get up the urge to trek into London and ask Cindy nicely, those moments are coming more and more frequently.

I still don’t think I’m trans, but there’s something there, something quite beautiful and unexplained, that is definitely not just ‘art’.

Pictured – another of the ‘comfy’ looks that I’d be happy to go to Sainsburys wearing. Well, maybe not Sainsburys, Maybe a bar.

And the other thing about this is, which makes it even more ironic and interesting, it doesn’t feel right to pose in these outfits. When I get the click I don’t want to preen in front of a mirror and bend my body into unnatural and man-muscle bending female poses. I literally want to just go sit somewhere quietly and let the feeling wash over me, because it’s like meditation.

So the three she-me-gos are effectively a thick suit of masculine armour that is wearing me out carrying it about, the fantasy Sarah who wants to be the mother, the housewife, the whore, the nurse, the pregnant woman, the fallen girl, all of those dramatically feminine archetypes. And then there’s me. What I’m starting to think, with growing fear, is the actual me, buried down there beneath years of masculine posturing and reactive feminine fantasies.

Pictured – ‘reactive feminine fantasies’. Just because girls don’t tend to dress like this nowadays but for some reason my brain sees this as femininity. Go figure.

And the question is whether or not I let her come out for a bit, have a chat. See what she says and what she wants. And when that happens? Who knows.

Plus she has a really cool sense of relaxed but beautiful fashion.

Stay beautiful and remember that occasionally that nagging voice in your head at 2:00am might just be the real you calling for attention…..

Pictured – again, not comfortable, but bloody good fun. But I can’t see myself going to Mothercare dressed like this. Mostly because Mothercare has now closed, but you get my point.

5 thoughts on “[Philosophy] ‘The Three She-me-gos’”