It’s been a week and a bit since my last session, which was utterly superb and stupidly epic in a nineteen hour/two days way, and I’ve held back on gushing on the blog because a: when I do it will be War and Peace if all the characters wore retro dresses and gushed, and b: it will as long as War and Peace. But I want to share some pictures and a little story of how fantasies can go very wrong and very right simultaneously.

But first I need to talk about Kitty. Kitty Klaws is my, ahem, ‘sex worker’ fantasy, a combination of vapid teeth-and-tits posing, huge (and I mean *huge*) ‘assets’ and a quirky sense of humour. She comes out at the end of my sessions as a vent, a way to let it all hang out (again, quite literally given the very large bosom she has), and I use her to edge into that wonderful area of titillation that I seem to need.

It’s all well and good to dress as a 1940s housewife, as a 2017 club goer, as an office-girl, but sometimes I just want to let my hair down. And Cindy at BWBG is nice enough to tolerate my silliness. And this time, at the end of the second day, I wanted to try something that ticked a number of own personal fantasies.

Again, stick with me on this, as it has a humorous end.

When Kitty first made an appearance it was in an animal print tight dress, with Cat ears and a lovely wig that combined a red fringe with long blonde hair. With the huge assets, a coordinated animal print handbag and a carefully positioned £20 note I did a load of poses as her being a street walker, and it was indescribably fun. The poses came naturally, the look just clicked, and Kitty was born.

On the next session she wore a kimono style silk robe (which for reasons that we couldn’t fathom actually made Cindy sneeze every time I took it off and gave it to her – I’ve never known anyone who gets the sneezes from static before and it was very cute) and we had some fun by, because it was the end of the day and the make-up was coming off, absolutely trashing the makeup as if it had, well, been worn off during the filming of one of those type of films.

Again, wonderfully naughty and titillating, but this time around I was determined to top it. It has become a tradition, with each and every idea being just a tad more kinky without going too far. This time I wanted to really play with the Kitty character by…….making her actually look like a cat.

Well, not a cat, but the fantasy was that one of Kitty’s ‘punters’ had hired her to satisfy his fetish of a cat-woman. Proper pet collar, cat-bells for earrings, and a face-full of cat makeup including a black nose, whiskers and the muzzle definition.

Yeah, I know. Kink on kink on kink. But that wasn’t quite enough, I needed another prop to top off the look in the kinkiest way possible.

And here’s where the Condom came in.

I’d done a number of pictures during the first day, one of which I styled into a 1950s style advert which adorns the top of this blog post. It’s naughty, suggestive and very funny, and I love it to bits. There’s something wonderfully suggestive about the idea of a condom, which is amusing because drab me has never used one (2.5 sexual partners in 48 years, a record of which I am both proud and a little depressed), yet Sarah, and Kitty, have both tasted the little rubber things. But more of that in a moment.

So the idea was this – Kitty would be made up as a cat-girl with the sexy/sexist accessories, and would pose with the condom in a suggestive way. I wanted to show her being ready for whatever was coming (cough).

So, with much hilarity Cindy adjusted the makeup of the day to add the cat features, we squeezed the considerable boobage into the animal print wiggle dress, tightened on the collar (and leash), hooked the cat bells into some hoop earrings and et voila, Kitty Klaws was ready for her punter.

Cue some fun picture taking, with lots of laughing as we looked at each, and then the final bit of fun, the durex Condom.

At which point it started to fall apart in an amusing way. Firstly, ever tried to open a durex packet with long nails? Don’t answer that, as I’d probably be amused and aroused by the majority of the answers, but to cut to the chase it’s a nightmare. I ended up using my teeth to open the packet and gingerly took the seriously odd feeling little piece of rubber out.

They feel weird. There, said it. I’m not sure whether it’s the fabric, the spermicidal lubricant (there’s two words that shouldn’t be together or that exciting) or simply what it represents, but as it hung between my fingers I felt an odd excitement and a touch of ‘eww’ at the idea of touching it. Cue some amusing photos of Kitty the Cat holding up the condom, pointing at her mouth, all the obvious erotica.

And then the next step, which was always coming. And that’s where it started to really go wrong in the funniest way.

Of course it ended up in my mouth. It was always going to, the idea of having some pictures of Kitty prepared to receive her punters dangly bits being the darkly delicious finale of the shoot. But I hadn’t thought it through.

Firstly, when you put a condom in your mouth, and I never thought I’d be typing those words and absolutely never thought I’d have a massive grin on my face while I did, you’re making a statement of intent that makes your heart beat a little faster. In my case it did, and as it did my breathing got faster.

And therein lay the problem. You see, a condom is explicitly designed to be air-tight. Can you see where this is going?

The condom made a greasy seal across my lips and we took some pictures with various looks of feigned shock on Kitty’s face. And I felt the need to breathe, as I never really breathe through my nose.

The condom’s thick ring of rubber remained against my lips, providing a humorous lip-gloss after the fact of spermicidal lubricant. Again, combination of the terms ‘lip gloss’ and ‘spermicidal lubricant’ are a wonder in and of themselves. But as I breathed in the bloody thing extended backwards into my mouth, as designed, and suddenly I found myself with an extended condom heading down my wind-pipe.

The lubricant meant to slipped easily to the back of my throat, over the gag reflex and down my air-tube, all while we snapped some pictures and my eyes got wider. 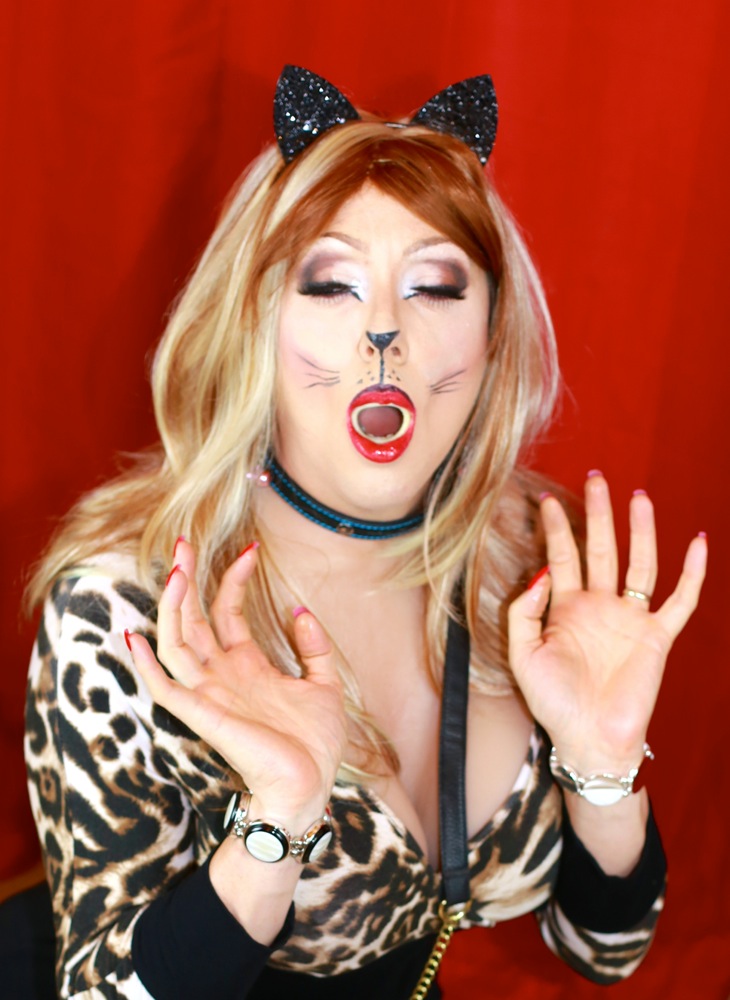 For a delicious instant I could literally see the headlines – ‘transvestite chokes to death on condom while dressed as a cat-whore’, and I scrabbled ineffectively at the rubber ring against my lips, trying and failing to get purchase against the slippery rubber with the damned long sexy nails as the condom extended inexorably back towards the point at which it would seal my air-tube, trying not to panic and stay sexy for the pictures while the calm voice in my head, which was actually laughing manically at the time as well as calmly pointing out the delightful ridiculousness of the moment.

In the following picture I’ve just worked out I’m not going to choke to death on a condom. Spot the relief 🙂

It was one of those sublimely ridiculous yet strangely arousing moments.

So, it’s nice to entertain fantasies. As long as those fantasies don’t try to kill you…

Oh well, back to patiently waiting for this bloody heat-wave to break and building myself up to writing the War and Peace of blogs about the last session.

Stay beautiful and learn to breathe through your noses, you wonderful people.

4 thoughts on “[NSFW] The Tale of Kitty and the Condom”