Ack, two days since the session and I’m all over the place emotionally. Still on a high but, courtesy of worrying about the session in advance (the logistics, not the frockage) and the issues with the trains, which resulted in me spending three hours not sleeping in a hotel before walking across London at 3:00am, which is an experience I wouldn’t inflict on anyone (let’s just say you might have to punch your way out of certain encounters with very drunk idiots) I’ve had next to no sleep in 36 or so hours. Makes the emotions all a bit, well, fun.

And in my tired state it got me thinking properly about that, and I do believe I’ve had an epiphany.

When I grew up, even though it was the 70s and what seemed to be the entire entertainment industry was deviant in the worst possible ways, I was taught to respect women. Full stop. Partly because my mother, who was a depressive drug-addicted venomous person, placed huge weight on my shoulders to grow up and protect whoever I ended up mated with.

I’m not sexist in any way, mean or fashion. I wouldn’t say anything sexist to a woman, I treat every woman I meet and interact with with the utmost respect.

But not Sarah. Not at all.

I’m pretty sexist when I come to describe her, to think about her. I objectify her femininity, I expect her to be a whore in the bedroom and a subservient wife in the kitchen.

Why is that? And yes, I am talking about her in the third person at this point.

Because it’s me. And I’m allowed to be sexist to myself. I would never dream of describing a woman as a ‘cougar’ or denigrate a waitress or a maid with comments, but Sarah is fair game.

And it’s part of the thrill. On one side to be, fortunately, a man, who ends up with all the advantages that society gives, but also for a little while to be able to take on the role of a woman, and to experience all the highs and lows of the world in which women get the short end of the stick.

That may be sexist, but in the end it’s only self-abuse.

I have an account on Flickr and, combined with the fact I have an imagination that if I could only tame would probably make me very successful in the writing game, I put up a lot of pictures with raunchy descriptions. It’s a lot of fun. And I get a lot of comments and private messages that, well, if I printed them here I’d be in a lot of trouble.

And I like that. The fact that a man anywhere in the world can log onto Flickr, look at Sarah and then fantasise. It’s a public service *cough*.

Let’s take a peek at a picture: 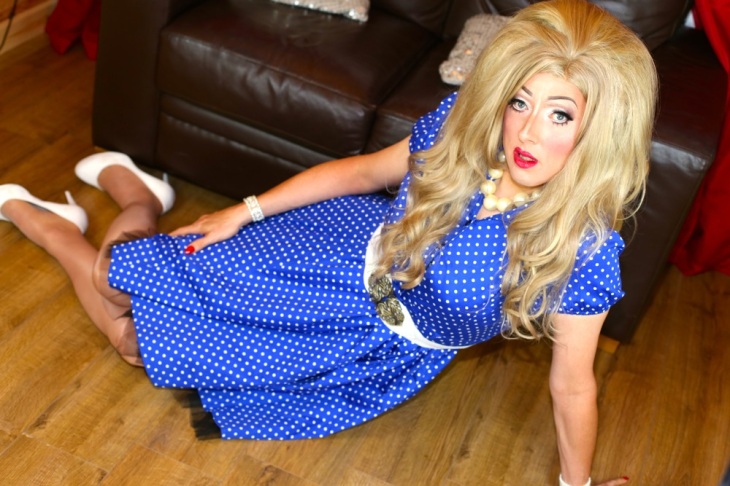 I look at her and I get an urge. I want to put my hands in her hair and hold her close to my groin. I want to mess up her lipstick. I want her on all fours, her dress lifted up, me naked and fully in her. See?

So where the hell does that come from? The fact I’ve been unintentionally celibate for seven years and would probably have sex with a watermelon if the chance arose? Or is it that it’s all with her, the look, the style of dress, the sexuality?

So, putting aside the fact that I actually enjoy and am very comfortable dressed and looking like that, is she my perfect woman?

No. She’s not. She’s the focus of my perfect lust, the ultimate sex-object. Plus she’s a fantasy, not physical. My partner is my soul-mate, and if she wasn’t having the physical issues she has had I ‘d be dressing her and, with her consent of course, I’d be satisfying my urges with her.

Anyway, going back to Flickr – I get some lovely comments on there from admirers who see Sarah as a lovely woman that they would want to be physical with. And so do I.

The fact I am Sarah is where it gets more complicated. As I’ve said in previous blogs I do get urges as Sarah, but are they urges I would do through with?

What people don’t think about when they are considering a fantasy is the aftermath. And that’s what makes me laugh – say Sarah gets herself into a situation where she finds herself faced with the chance of testing her gag reflex. What happens after, when he is spent and she has spat or swallowed. I don’t know about you, but whenever I, you know, have reached a climax, I tend to come down with a crash. Would that be an awkward time? Would you just shake hands and say goodbye?

After a moment of intimacy maybe the balance of a relationship would be skewed. Maybe the man would see Sarah as more of a woman and treat her accordingly. Maybe Sarah would get an attack of the guilts (is there such a thing as oral-bulimia, purge swallowing and purging?).

I’ve always thought that moment would be a point of no-return, a great jump over a gulf of sexuality. Maybe so, maybe not. And maybe the whole urge thing is down to me wanting to treat Sarah as more of a woman and less of a personal sex-object.

It’s a quandary. But a fun one.

I’m going to go into each of the outfits from the session in detail because they were so much fun, but in the short term I’m sitting fizzing, at the end of my stamina and with a head of full of dirty thoughts.

So, for the moment, stay beautiful and internally sexualised you wonderful people.

3 thoughts on “Basking in the Aftershock”