My name is Sarah and I am a lipstickoholic. It’s been just under one calendar month since I felt that lovely, delicious feeling of wet perfectness on my lips. And hellfire, I miss it.

Anyway, after that little spasm into almost-fetishism, I thought I’d have a nice pause this time and sit back and try and describe those little moments of pleasure. The ones that make it all worth while, the stress, the worry, the years of self-mental-flagellation, you know, the standard psyche of the closet T-Girl.

But first, on the subject of the ‘T’ word. ‘Transvestite’. Not the world’s sexiest word (unless you *do* have an odd fetish, and if so, well done), and also, in my humble opinion, a pretty crap word to describe the feeling.

If you don’t know ‘the feeling’ then it is going to be hard to explain. It’s that tiny moment of joy, when you put on an object, a dress, a piece of jewellery, the feel of a wet eyeliner across your eyelid, the soft touch of a powdered brush on your cheek.

It’s more than words for some of us. I’ve led an interesting existence up to this point, a lot of it I can’t share, and there’s nothing like those feelings in the world for me. I’ve been ecstatically happy, I’ve been utterly terrified, I’ve been proud, I’ve been drunk. And nothing comes close to that warm feeling deep down inside when I transform.

Transform is a better word. Transvestite just doesn’t trip off the tongue and yes, I know it’s from some daft Latin (trans=across, vestire=clothes, come on, that’s not even trying) but it just strikes me as a crap word.

But I digress. I wanted to talk about those little moments of pure joy. Yes, it’s a personal thing, but I’m really hoping this strikes a chord with people. Otherwise I’m just broken and while that won’t come as a shock (and I’d be pretty proud to be different to be honest) I just don’t think I’m that different from most other people. That change gender through external costume and thoroughly enjoy it. There’s another word for you, what about gencostumier?

I have certain quirks around when I dress. There has to be no male residue, I don’t wear boxers under a frock for instance. The transformation has to be complete, if I can see any of him in her then it doesn’t work.

But there are a couple of moments during the makeover that really light a fire in the dark place I like to call a soul. And here they are, in no particular order…..

That moment when the wig snaps into place.

I have long hair. Not because I want to be feminine, but because when I was growing up (cough, the mid 80s) it was the style of the people who were into heavy metal. This was before it all became trendy and hair-metal bands watered everything down to a middle-of-the-road mess. I like my hair, it defines me. And I can’t be Sarah with that hair. It’s his. So I’m a wig girl, all the way. That moment, when you’ve got the cap on, your nail-tipped fingers holding the front while someone else pulls it tightly over the back, and you open your eyes. And she is there.

Thats one of those moments, and it never fails to thrill me. Plus, if I’m honest, the feeling of a wig around my head is a bit of rush. But maybe that’s just the blood getting stuck.

Slipping on a high heel.

I’m going to be honest. I’ve always found high heels painfully sexy. It’s the way a woman totters in them, the way it forces the leg into a certain shape. Yeah, it’s mildly sexist and it’s a terribly unhealthy piece of footwear, but come on. When I went out fully dressed just under a month ago the shoes were the things that did it for me. And they did me in, of course. Little sods look so sexy until you’ve been standing around, legs straight and together, for a couple of hours. Then they hurt like no other pain. But before it becomes too painful to stand, they are the best.

I remember walking to the toilet at one point in the evening, dying for a pee but trying to maintain the feminine poise, and I nailed that walk a woman does when she wants to get somewhere fast in heels. That brisk little stepping where the heel hits the ground first with that delicious click, followed by the toe while the other leg swings forward, quickly but gently. Man, that’s so nice to watch, and even better to do.

Bordering on BDSM this one, but I get a rush of pleasure when the strings are drawn tight. I’ve been lucky lately in that I’ve finally found a diet that works for me. It’s called ‘not eating as much as I used to’ and ‘stopping when I’m full’. Oh, and ‘not eating to hide the pain of not being able to cross-dress whenever I want’. But anyway, this has allowed me to get down to a beer-belly-sucked-in 38inch waist, which is still large for a lady, but I’ve managed to find a wonderful place that does strong waist training cinchers, and the one I’m currently using gets my waist down to a fun 34inches. Yeah, still not super-model shape but given I’m 6ft 2inches and bone-structurally a bloke, that’s not too bad. When the strings are pulled you feel this tightness, and the more you pull the more hourglass you become.

As I’ve said on many occasions, I’m the world’s least sexist individual, and all these ‘do you have a beach body’ adverts are frankly badly pitched and offensive to 90% of the population, but I love an hourglass figure. Combine the corset with some butt padding and some breastforms and I get the shape I want. Running my hands down the tightened corset is another one of those thrills.

The feeling of a false eyelash being applied.

Can’t really describe how good this feels. You get a cold rush as the glue tightens, and a weight on your eyelid. And when you open your eye for the first time after, it feels heavy, and everything is slightly darkened by the canopy of lashes you now have. A quick flutter to make sure they are secure, and you are off. But that sweet moment when the glue is just adhering, that’s another one of those elixir moments.

This one is a personal one. I can’t apply makeup. That’s not to say I haven’t tried – I used to try and every time I looked like a drunk prostitute *after* she’d messed her lipstick up. Whilst that’s an interesting and potentially kinky look it doesn’t lend itself to an enjoyable evening of dressing. So I use makeover services.

Partly because I love it when an artist, when someone who is more skilled at something than I will ever be, has a chance to show her skills, and partly because I love giving myself up to someone to change. And part of that change is I don’t want to see the transformation until Sarah is in the room. I don’t want to see him slowly subsumed and her slowly appear, I want to open my eyes and bang, get the full effect of staring into a pretty girl’s face and realising, in that delicious instant, that behind those beautiful lashes, lipstick and blusher is me. Sarah. That moment is like no other.

Again, one of my personal things. There’s something about doing up the zip on a frock that, when it reaches the top and is fully done up, gives a rush. It’s that moment when you are wearing the dress, a dress that was made specifically for a woman.

In the old days that moment enough was satisfaction itself. I used to fantasise about the dress being made, being sold in a shop, and ending up with me wearing it, with it being *my* dress. Now I’m kinda beyond that, but still that moment when the zip is pulled to the top and you brush the fabric down, feeling it flow over your bosom, feeling it lying across your legs, is a moment of delight. 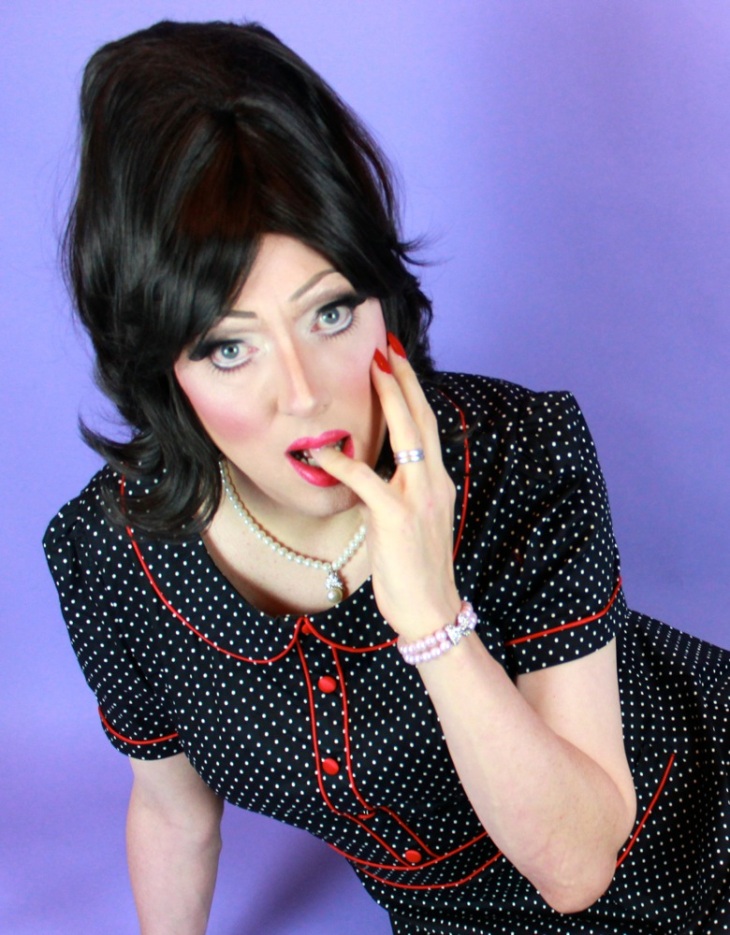 I’m jones-ing for a fix. I need some Sarah time. It’s only been a month, but my skin is crawling. I have a cupboard full of her clothes, and she needs time out.

Unfortunately, because of work, that’s not going to happen for a while. I’m free around mid-September, so I’m working on exercising, seeing if I can get down to a size 14 dress, staring longingly at the frocks in my closet.

And thinking of those moments.

4 thoughts on “Those little moments of indescribable joy”