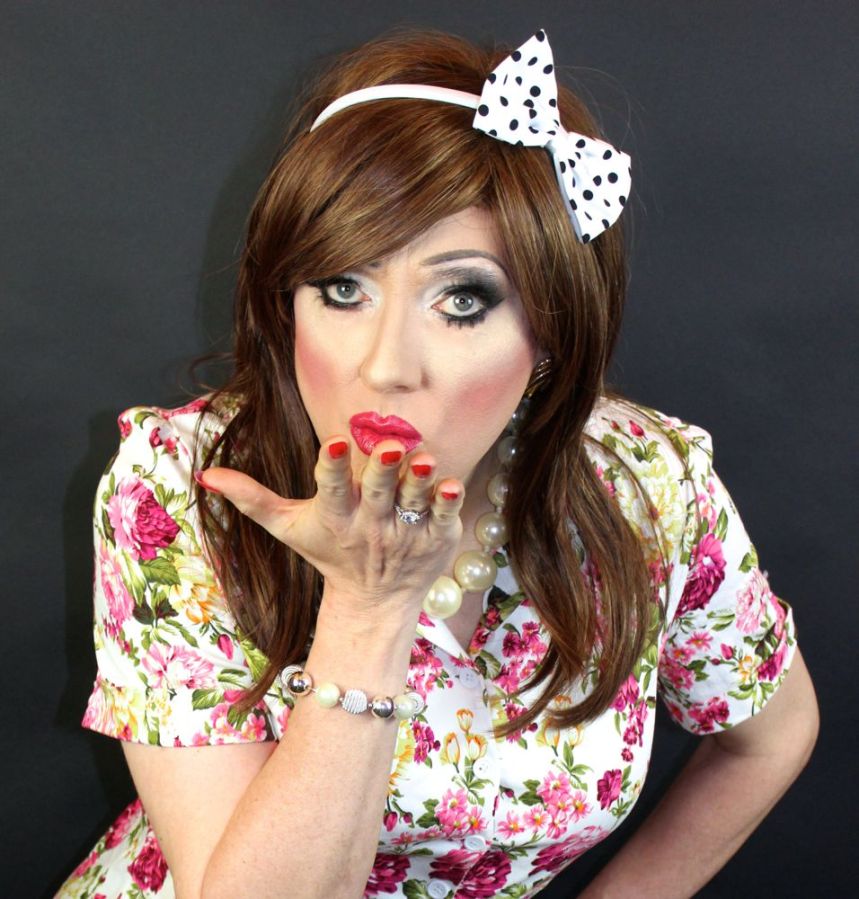 Courtesy of hot weather, late nights and copious vino my last couple of blog posts have strayed a little from the idea behind this little project, bad Drab-Mode, so Sarah here to talk about….. FASHION!

Well, not so far from previous posts, because as well as talking about my favourite Fashions I’m going to compare and contrast Mr.Cynic and Ms.RetroFrocks, just for laughs rather than seriousness.

Mr.Cynic has *no* fashion sense. Show Sarah a photo of him and he’s definitely not date material, if you know what I mean. He has four pairs of the same jeans (black), a number of T’shirts and Hoodies embossed with the company’s logo (he loves the company he works for), and has just discovered socks that aren’t black. He has no urge to chase the fashion train, and sees clothes as the things you have to chuck on at the start of a day in order to make others comfortable. He follows the Einstein approach – everything the same so you don’t have to exert any brain power choosing.

Ms.RetroFrocks, well she’s a different beast. She gets inspired watching television shows, often missing the point of the shows to obsess about a dress that an actress is rocking, or a blouse that an extra is wearing. She has an eye for the more femm fashions, but some in particular.

Peter Pan Collars. There’s something superbly femm about any piece of clothing with a Peter Pan Collar, especially when combined with a long-bob hairstyle. Sarah has just bought an outrageously short red polkadot dress which is more of a tight T’shirt, with a large white Peter Pan Collar and three buttons up the front, and she’s going to model it next week at her next photo-shoot. She’s also bought a fifties swing dress, red with a floral pattern, that is sleeveless with a full skirt and, no surprise, a white Peter Pan Collar.

She’s also into posh business frocks, like the one above. She’s bought a couple, one a wiggle pink number with an 80s feel, round collar, buttons, little flare-y false skirt at the waist over a knee length pencil skirt. And a couple of 1950s style office dresses, bows at the collar and big buttons.

Pink factors highly in her clothing choices. She tends to avoid black as it ‘ages her face’, although she has her eye on a very nice goth dress that will require a hooped petticoat that is all layers and layers of black velvet, bows and lace. Not her usual look but building up for a visit to the Whitby goth weekend methinks.

What doesn’t she like? Maxi dresses. What’s the point of shaving your legs if you’re just going to cover them up? 🙂 Anything 1970s because, well, just because.

So why does Sarah have such a specific eye for fashion, yet Mr.Cynic barely notices he is wearing clothes?

Because Fashion is the way that women can let themselves express. Hell, the male-society provides very little other outlets and I’m ashamed to admit that phallo-centricity has been around a long time and shows no sign of being consigned to the dark ages, as it should be.

Clothes are the one area that women have taken and owned. Some might say that it’s just part of the peacock-like posturing that makes up the convoluted and complex mating rituals leading to breeding, but they are missing the point.

Us T-Gurls have a unique perspective on all this. As I’ve said before, if you want to see what a man thinks is an attractive woman, ask him to pick out clothes that he would wear as a girl. Of course, 95% of them would gasp in disgust and vehemently refuse (yeah, but we all know of that 95% there are at least 40% who secretly want to try). But for the ones who do, the ones who pick their clothes, do their own makeup (sadly, not me, I have zero skills with any form of brush), pick their own shoes, they are showing the world what they see as attractive.

I’m not a sexist, so the next statement may cause me to have to go all Salman Rushdie, but I think fashion for women has become too much of a dog-eat-dog one-upmanship competition that is cynically exploited by big companies to drain women’s wallets. It’s always ‘the next best thing’ which more than often is a rehash of something that has been out of fashion for just long enough so the generation of women being inflicted upon weren’t around the first time.

Ooo, straying into dangerous waters there so I’ll sail for the shore. Sarah loves feminine, or what she sees as feminine, fashions. Fashions that highlight the femininity, not only of the clothes but of the roles they represent. She loves Tea Dresses, as they are so 1940s stay-at-home housewife, she loves mini-dresses as they represent the days of the hippie era, when sexuality wasn’t as repressed. She loves office-wear as it insinuates the behaviour of a secretary or an office-girl as opposed to management. She loves bridal wear because it is the ultimate statement of being a woman and dedicating herself to one man (not broaching into the subject of same-sex marriages because a: as far as I’m concerned anyone who wants to marry anyone else should be allowed to and b: I don’t want hate mail). Fashion and role interplays very much in terms of femininity, and as such Sarah likes the fashions that have a subtle meaning.

She doesn’t like androgynous clothing because she wants to accentuate the feminine, not fight for equal rights. In her defence she has, as stated earlier, a unique perspective what with sitting precariously on the wall between stubble and silky.

So the fashions she choose to drape around herself and pose in all have a deeper meaning around embracing the role as well as just wearing the fabric.

And that’s the subject of the next blog, coming soon. The adoption of feminine roles and that moment when you switch from the man playing a part to the woman being the part.