There’s a lot of Viking in my blood (hence the Valkyrie-esque height whenever I slip on heels more that 2 inches), plus I managed to throw myself quite successfully off a mountain when I was younger, spending a night on the side of a hill with a leg broken in three places, and suffered from hypothermia which seems to have messed up my internal thermostat.

So, four weeks of 28C+ temperatures during which I had to spend a lot of time on trains in the NorthEast of England, including 16, yes, *16* trains that were late requiring me to stand on platforms at rush hour, eight people deep, in temperatures that made my armpits turn to water hoses, and I am just praying for rain.

But, femm stuff – I had a point mentioning this. I am in my drought period at the moment when it comes to letting Sarah strut her stuff. I can’t do it in high summer. At the moment I’m over-heating in a pair of shorts and sod all else – chuck on a pair of tights, girdle, corset, bum-pads, full prosthetic breasts (and boy, they are even hot in the winter) and a wig, and I’d wilt like a very pretty flower. I wouldn’t sweat, of course – girls don’t sweat. But I’d perspire. A hell of a lot.

Soooo, I give myself a couple of months off while England does its best to have a summer. It’s trying hard this year, and it feels like Barcelona did last year – hot, hot and plenty of mozzies.

My next session is in August and it’s going to be a doozy. Another apartment session, this time a full day, where I will be trying on various housewife looks and playing the part – having a clean, maybe a cook. Might even dig out some serious chick-flick movies and sit and let my mascara run.

But having a couple of months off is driving me up the wall.

See, this thing I have, it’s not something you can just turn off. I tried that – you can pretend that it’s all behind you, that you’re a ‘real man’ (C) when it comes to other less advanced people’s opinions, but, at least for me, if you’re not true to yourself it is absolutely not healthy.

I spent a good number of years pretending to not be Sarah. Those years were, well, bad. I put on tonnes of weight, I let myself go physically and mentally, and I was a mess. I suffered from mis-diagnosed depression (which involved some hilarious medication that gave me some of the best side-effects, including mild feminisation/loss of male sex drive, which would have been superb if I was letting Sarah out of her pink flat. And because I wasn’t, I was depressed – an amusing circle of silliness).

I didn’t realise it was ignoring her that was screwing up him. Now she’s back (yay!) I’ve turned the body around, which is a hell of a lot of effort after you pass the magic 40 years old, I eat better, I feel better (ish) and my depression is completely different.

So, leaving her locked in her beautiful flat in my head for two months is excruciating. But oddly I find myself doing one of two things. I either get very, very frustrated and confused, which leads to major impulse purchases online of stuff for Sarah ‘when she can come out and play’, or, more worryingly, I go numb.

This numbness is a kind of sadness where I don’t appreciate anything. It’s a little dangerous, as the reason I get it is that I’m not letting my Sarah side out, but by not doing it everything gets a bit muffled and I enjoy nothing. Which, I know, sounds a lot like depression. 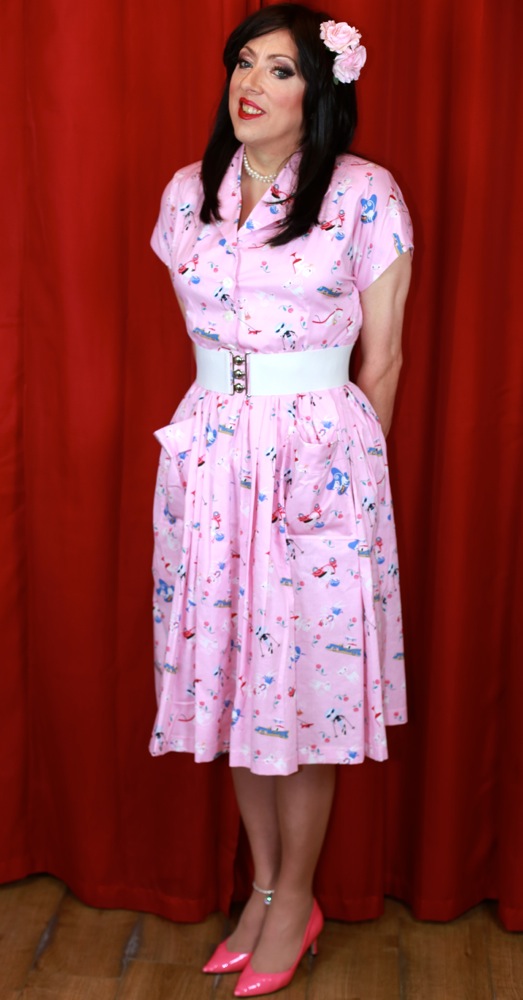 Pictured – although a lovely pink Kitty-print Kitty frock isn’t the normal cure for depression in a middle-aged man.

But it isn’t. Not really. It’s just the inner me being sad about not be able to be the inner she.

So I focus on Summer buggering off, so I can frock up again without worries of collapsing in a (beautiful) heap with heat exhaustion. And yeah, it might be funny to end up in Casualty with ‘the vapours’ but given the fact I’m still pretty much one foot firmly in the closet that would be a bad idea (C).

So, how do I deal with the Summer-induced exile from Sarah’s lovely presence? Put simply, I imagine…..

My next session will be a proper housewife session and I’ve been trying to work up courage to ask someone I know to play the husband to Sarah’s housewife for some pictures. Nothing more, nothing sinister, I just would *love* to see some pictures of Sarah with a male counterpoint. To me it’s the ultimate in embracing the role, the yin and the yang. Plus I have a sneaking suspicion that Sarah will absolutely blossom in the presence of a male force. I’m dying to see if Sarah, as I think she would, would slot completely into the feminine role. In fact, I think it would be delightful. But, then again, I haven’t slipped into a pair of heels for a month and I’m looking at another month, including this terrible heat, before I can relax into her again, so my hormones/urges are all over the shop.

But what kind of pictures, I hear you ask? Just the stereotypes – her sat on a sofa, him stood behind, his hand on her shoulder, her hand gently on his. A classic husband/wife pose, showing the deference of the woman. You know, 1950s sexist stuff like that 😉

Oh, and I’m planning to hit the Wayout Club again. Yeah, yeah, I wrote about how bad it was (from my perspective of course) but I’m going to give it one more chance to not scare me. This time I won’t be in the presence of my best friend, which was confusing on so many levels, or dressed like a modern day club girl. This time I’m going to go as me, with a 1940s style frock, sensible heels, the beautiful blonde ‘Phoebe’ hairstyle I love, plenty of perfume, my lucky anklet given to me by a darling friend (it has a ‘Q’ and a Heart on it, utterly divine). I already have the frock picked out, unless the other two I’ve ordered are better (yeah, yeah, I’m such a girl at times). 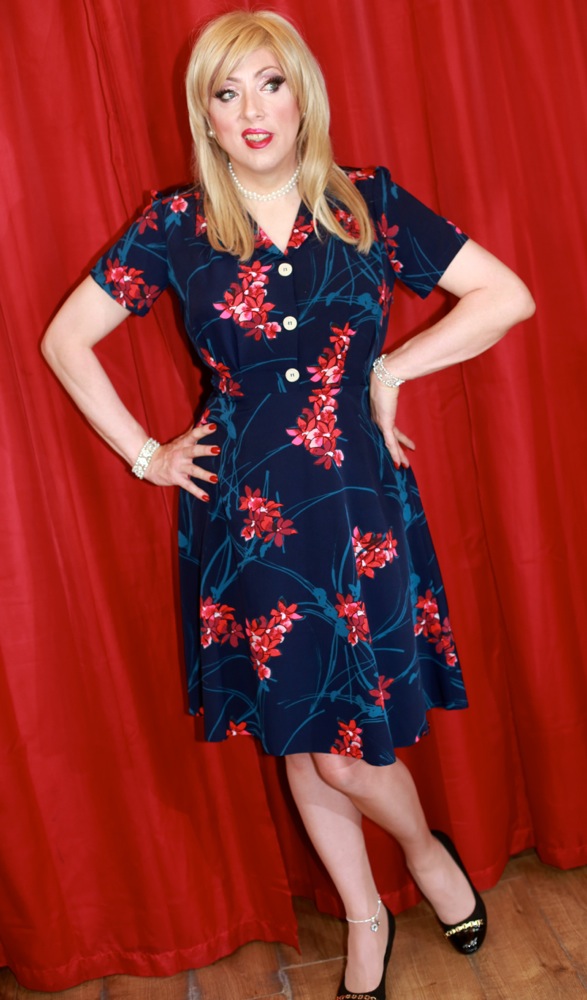 And because I’ve had a drought of Sarah I’m soo looking forward to shedding this hot, sweaty, male persona and being the true me for a couple of days. Which leads me on to a lovely conversation I may have mentioned before that I had with my best girlfriend a couple of weeks back.

Here’s the evidence for the latter – he *never* smiles in photos, in fact his FB feed is full of his friends making humorous and sarcastic comments about the smiles he never has on any of the pictures. She is *always* happy. Sometimes I can’t keep the smile off of my face – the muscles literally hurt as I stare at her looking back at me from the mirror.

Pictured – not smiling, just to disprove my own point 🙂

It could be that familiarity breeds contempt, as they say. That having been in his world and his form for so long it’s just become a shell. But I’d like to think that life isn’t like that for most people – and when I’m Sarah I’m genuinely a nicer and happier girl.

Oh yeah, one last thing to chat about – I’m going to compare cross-dressing to serial-killing again, so phase out now if that annoys you. As a serial-killer develops towards their first kill they tend to go through a number of phases of ‘allowance’. This is a process where they change something about their behaviour to see if they can get away with it.

I’ve always called this escalation when I talk about it from my perspective (and no, I’m not a serial killer. At least not yet, given this heat 😉 ), and it’s something I’ve noticed a lot as Sarah has come more and more into the spotlight. Well, this week I escalated in a fun yet scary way. Doesn’t sound like much, but I mailed some of my favourite pictures of Sarah to my work phone, from Sarah’s email account, where I saved them into the phone’s storage. Sooo, amongst all my grumpy selfies and pictures of offices I’ve attended and meals I’ve eaten there are wonderful pictures of Sarah.

Why is this an escalation? Because I show those pictures (not Sarah, of course) to work colleagues and friends. And one swipe too far, left or right, and they will see Sarah.

Yeah, the drought is pretty much driving me insane…. That or the heat 🙂

Anyway, stay true to yourselves and be beautiful, and occasionally let yourself escalate. It’s a lot of fun….

Pictured – between him being miserable at York Station and him eating breakfast in Leeds is this picture of her. Just one swipe the wrong way and……