You know what? I feel damn kinky at the moment. No, not in a ‘tie me up, tie me down’ kind of way, or in a ‘stick a dog collar on me and call me a bitch’ kind of way, but, as you can tell from the previous two quoted examples, I’m at ‘that time of the month’.

So I thought I’d write something fun for a change. Life is too serious at the moment, real world and my world, and it needs a little lightening. No, the black Dog isn’t in residence, but this time of year, when the nights draw in and it’s dark when you get up *and* go to bed, you need to find that certain thing that gives you a delicious little buzz inside.

So, there you go. Today’s little femmy rant is going to be all about the letter ‘T’. 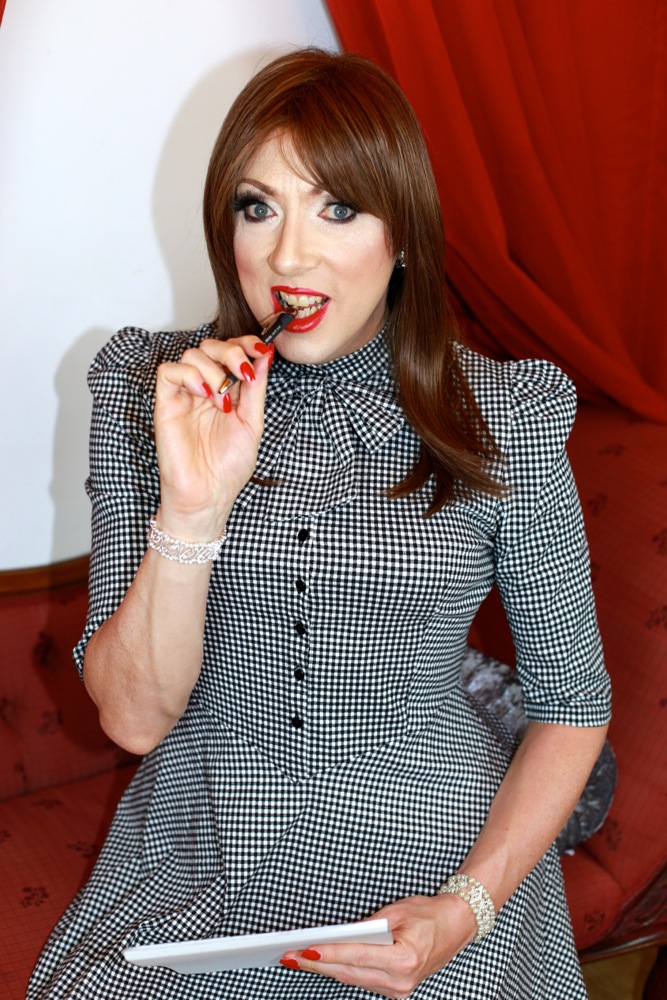 Is it just me, or does anyone else in our, well, interesting situation get a monthly cycle? I kid you not – it’s not the obvious moods/red stuff that women get, of course, but I get a weird emotional cycle that seems to take four to five weeks to play out.

Here’s how it goes – I feel nothing femm at all, maybe a little guilt and the nagging urge to delete all my bookmarks, close down my Facebook, Twitter, TVChix, Fetlife and Flickr accounts and fade ingloriously into the drab darkness. Then I feel the spark coming back, a little warm naughtiness at the back of my mind like a pink, perfumed itch that just won’t go away, Then it becomes almost overpowering, the need to *be* her for just a little bit. And then the fantasies start to creep into the moments before I go to sleep, or when I wake up. The idea of spending time as her with a man.

Not just the sexual urges of which, at this point in the T-Cycle, are pretty overwhelming at times, but also the idea of having a red-blooded male look at you as a feminine person, to treat you as if their body and mind is telling them that you are a suitable partner. Filling the role completely as the ‘girl’ in a two person relationship.

Thinking about just how far you are willing to take it, a fantasy from your part but for them a sexual encounter with a T-Girl. Are you willing to go through with it? What would happen in the aftermath, when he is spent and you are suddenly the type of girl who has to decide whether to spit or swallow on a first date. What would that feel like, would there be sudden overpowering guilt as the subsumed man inside realises what the girl inside has let another man do to the shared body?

And then the cycle moves on, the urges reduce to the point that the fantasies fade, and the idea of just being wrapped in a dress, a face full of makeup and a pair of uncomfortable heels squeezing your feet in ways they weren’t meant to be squeezed, that idea gives you the warm feeling.

And then that subsides and you find yourself back at phase one again. Ready to ride the rollercoaster….

And also, if I cracked and, to use an inappropriate phrase, ‘did the dirty’, would that break the cycle? Which brings us onto the next ‘T’….

‘T’ is for Titillation

I do it myself. Lots of T-Girls do it. You type something to someone in a message, or put a comment on one of your own photos, and you know deep inside you’re doing it for that delicious thrill of titillation. That brief spark of sexual naughtiness deep inside when you casually and carefully let phrases into your comments that could be taken one of two ways. And you know which way you want it to be taken.

It’s titillation, the act of getting a little sexual thrill from innocent and not-so-innocent flirting. I do it a *lot*, the captions on some of my photos on Flickr and Facebook are seriously designed to give me a little thrill when other people read them. The insinuation being that Sarah is not quite the nice girl she makes herself out to be.

And you know what? It’s natural, and it’s harmless. This is the wonderful thing about the society we live in (with some exceptions, I’m looking at you America) that has become a lot more tolerant of T in the last ten years.

Plus, speaking from my own personal perspective, I *love* being suggestive about Sarah. It’s that naughty little thrill that goes beyond just putting up pictures of yourself (and even doing that is titillation for me, being honest). And if other people get the same kind of thrill from it, good for them.

I spent way too long in my life hiding Sarah, feeling that she was an aberration in my behaviour, that I was somehow broken for having an undeniable urge to dress and be her when I could. As such I wasted a lot of my younger life not being Sarah. I’m just genuinely lucky that I live in the age I do right now, and that’s why every day should have a little titillation in it.

Of course, ask me next week when Sarah’s raging hormones aren’t blasting around my blood system and you might get a more boring, drab-induced answer. But don’t listen to him, listen to her……

Not because of the murder (if it was a murder, go watch it and make your own mind up), but how quickly people choose to label themselves and then belittle those that don’t share the same label.

Example in point – at one scene in the documentary one of the two drag queens that the film is really about, both of whom were at Stonewall, gets up in front of a massive crowd of LGBT people and gives a passionate and bitter speech on how the T in LGBT is looked down upon by the LGB in LGBT. And it was obviously true, the crowd were hostile to the drag queen because she wasn’t L, G or B in the labelled sense of what they thought it was.

And I see echoes of that now, in this partially enlightened age, but slightly worse. Not only do we have an underlying tension between the LGB and T, we also have some serious mud-slinging and all round nastiness within the T-scale.

But what do I mean by T-scale? Well, sometimes a full transgender person can look down on a part time transvestite for not being serious enough. Not deserving the label of T. And conversely some genuine transvestites can look down on Drag Queens for seeming to ridicule the process of dressing cross gender. And so on and so on.

Which seems absolutely insane to me. We don’t have to all get along, that’s physically impossible even if we were all the same because humans are not built like that. But when we have an escalating rise in violence towards the T community as a last ditch backlash against acceptance (and I hate to say it, but often done by people that are fighting internal urges and can’t rationalise their own position on the G-scale or T-scale, but less said about that the better) you would have thought we could put our handbags aside and take care of each other.

Take me for example. I did some math (which I won’t share as that would seriously start to lose people 🙂 ) and I have been Sarah, over the last year and not taking into account night times when I’m sleeping, about one day out of every thirty. One thirtieth. The other 29 days out of 30 I’m a miserable stubble laden hulking person that has carefully cultivated a ‘people cross the road rather than walk past me’ look and persona. So on the T-scale I’m not transgendered, I’m barely even transvestite.

But why should that matter? I cross dress, and I cross dress because I *love* it. I also, and I hate to admit it but it’s true, love being the hulking miserable bastard. I love both. I don’t want to be a woman all the time, I like the occasional touch of male privilege.

It doesn’t matter if you are convincing, or if you are not. It doesn’t matter if you dress every night, or occasionally, or even if you want to shed the male persona completely. Whatever you choose is you, and as long as you love you, in whatever format you end up, that’s fine. We no longer have to conform to someone else’s opinion of normal.  And that goes for other T-scale people as well. Rant over…. 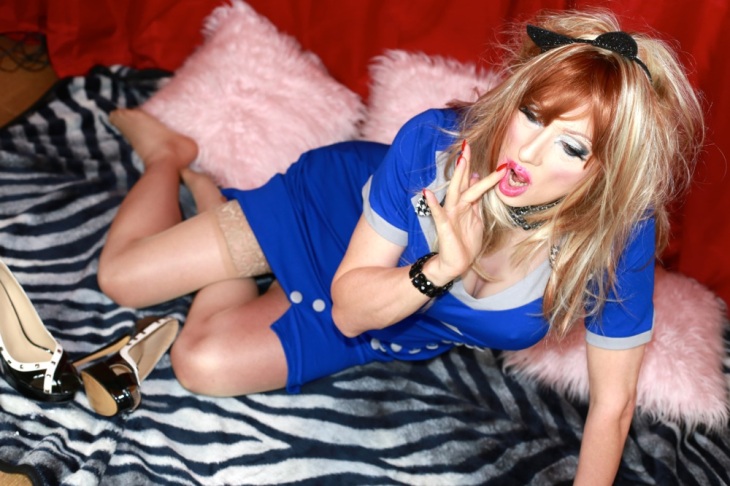 ‘T’ is for Tantrum

Still with me? Good, this is the best and funniest part.

So, I was in London today in drab, fighting back pain as I walked from Euston station to Monument. This was around 7:45am, when everyone was trudging to work, and as per normal I was carefully, without being a stalker, admiring the classy business wear of a lot of the ladies heading to jobs in the square mile.

And then something very unusual, at least for me, happened. In front of me were two very smartly dressed young women, both wearing tailored suits and blouses. As we walked along past Bank a transvestite came out of the Tube station.

This person was in a bad way. She’d obviously been drinking all night and was having one of those moments, when a tantrum is just beneath the surface. She was wearing an extremely revealing pink mesh top, black leather skirt, torn tights, makeup in disarray like she had been sleeping in it, or crying, pink hair seriously mussed.

And she was in a mood.

She walked past the two young woman and with a look of disdain said, loudly, “Take a long look, you’ll never be this glamorous”. I kid you not.

The two women laughed into their hands as they walked past the T-girl, who ignored them and walked up to me.

Now, I cultivate a ‘don’t talk to me’ look in drab life. I have a scowl that can burn skin off. Underneath I’m a fluffy kitten, as you all know by now, but I portray a serious ‘don’t f*ck with me’ attitude that keeps people distant, it’s just the way I’ve adapted to survive in the various dodgy and dangerous places I’ve been.

The t-girl walks up to me and with a serious amount of disdain says something so ironic I almost burst out laughing.

“You’ll never know how I feel!” she said and flounced off to wherever Courtney Love-a-like trannys spend the days.

I stood there for a moment, gathering myself, before walking to my office to be drab for the day, thinking to myself just how utterly wrong she was but also how good my drabs-guise is.

And a part of me doesn’t want it to be *that* good.

Stay beautiful and ‘yourselves’, you wonderful people….. 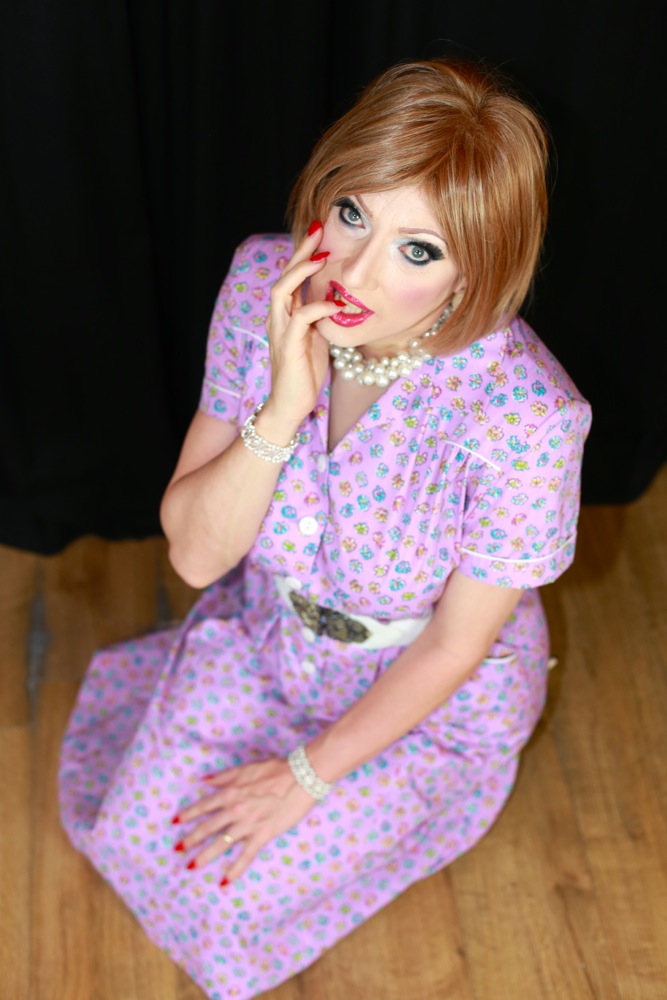