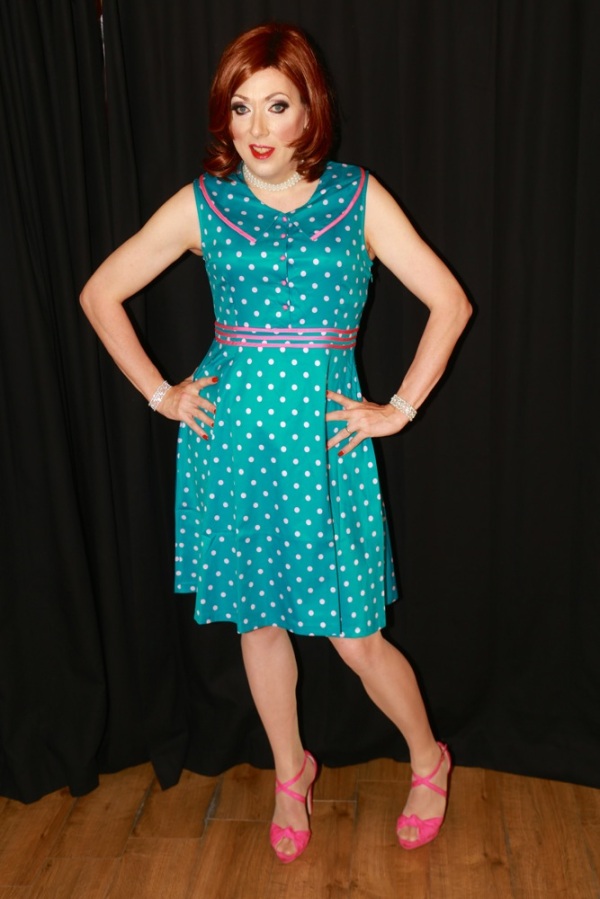 After the ups and downs of the last couple of blog-posts, combined with the events in London yesterday I’ve decided a breath of fresh air is needed to calm me down. So, and mildly ironic given the published title of my blog-page, lets talk Retro for a change….

And yeah, it’s just an excuse to show off some of my favourite retro-frocks and looks that the wonderful Cindy of Boys Will Be Girls has managed to squeeze out of my battered, mid-life not-so-hourglass-figure and shape, but hell, a girl needs no excuse to gush over fashion.

But I’d also like to make this more of an IAQ (Infrequently Asking Myself Questions) session as well, because I’m a little confused (and no, not about the position of my genitalia or whether to wear a skirt or not).

Turns out not many people like the idea of retro-fashions. I have a Flickr account and, yes, I’m somewhat of a social-media-whore in that I *love* getting faves and comments. Some of the comments are, well, a little blue, but given the looks and styles I’ve messed about with that’s to be expected. 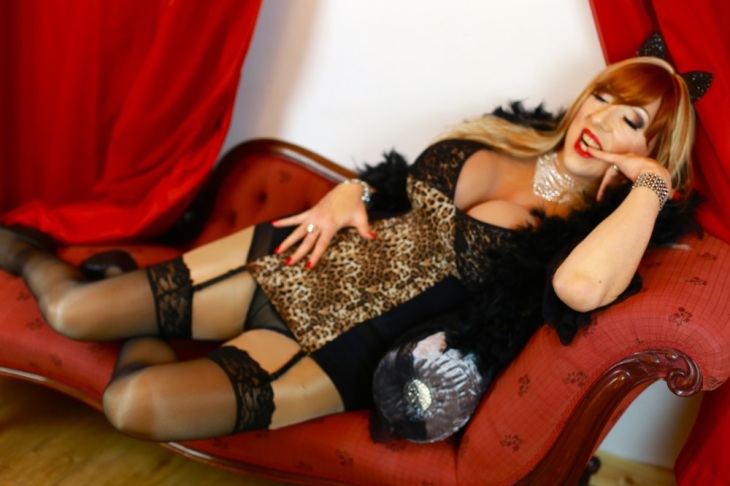 What I don’t expect is the massive difference in interest between pictures. A picture of Sarah as ‘Kitty Klaws’, the porn-star persona I use when I want to have some serious fun (see above), gets 150+ likes for nigh-on every saucy and sexually suggestive picture she puts up. On the other hand, the stuff I find seriously sexy, the 50s housewife, the 60s receptionist, the 40s land girl, get 40ish hits a time. 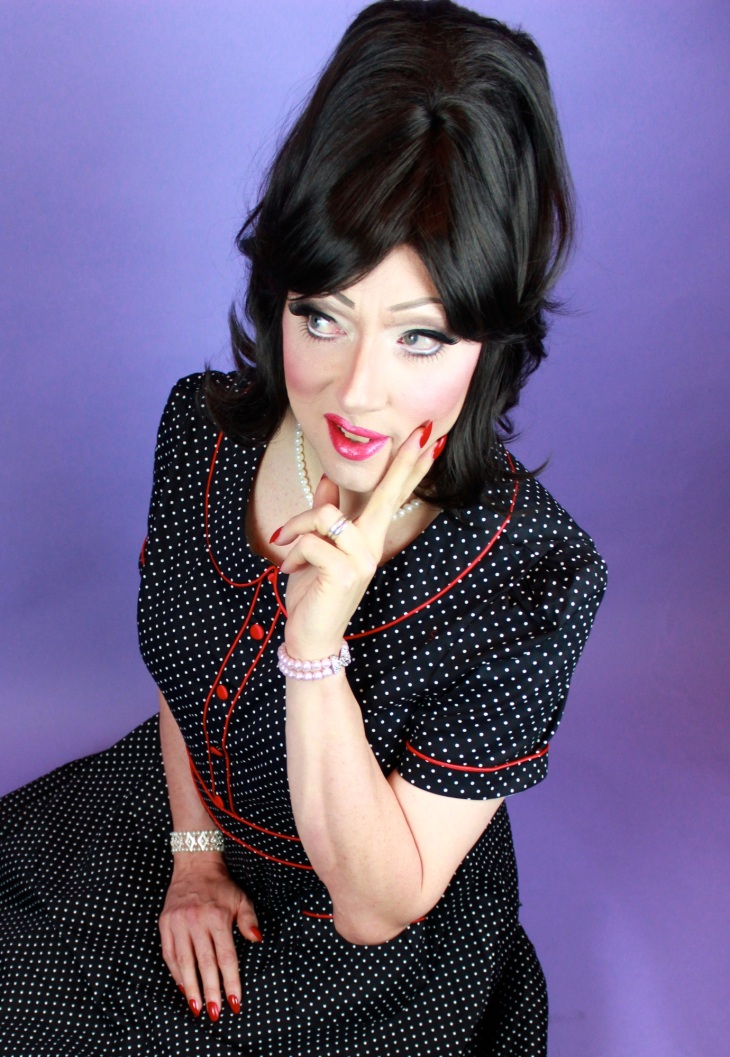 Now I know why this is – I have a fetish. Yup, bet you couldn’t have guessed that from the smiling made-up woman’s face that is almost all of my pictures, but I do.

I *love* retro clothing. Always have. When normal people of my XY chromosomal nature see a sports car or a motorbike they obsess on what it would feel like to rip down the road in it. Me, I see something like ‘Mr.Holmes’ and spend a lot of the film obsessing on just how delicious it would feel to wear the polka-dot housedress that Laura Linney wears as Holmes’ housekeeper.

And it’s not a subtle urge. I get warm inside. No idea why. I have no interest in history as such, I don’t actually want to be a woman (sorry various admirers with castration fantasies) but the femininity of retro styles just makes me go light-headed. They’re all so, well, feminine. The flouncy skirts, the padded shoulders, the collars, the tight(-ish) waists. They just tick a box deep inside my head on what a woman’s style should be.

And it’s not just me. I love seeing GGs in retro-fashions, especially when they’ve gone all out with the appropriate lipstick, hairstyles and the like. It gives me a thrill to see a post-feminist woman of the 21st century happily dressed as a 1950s starlet.

So aside from a head injury that I don’t remember having it’s hard to put my finger on just why I love the stuff so much. And interestingly I’ve tried proper vintage clothing and the thrill isn’t the same – often the fabric or tightness hasn’t survived the decades (and given my current atrophy towards pear-shape I can sympathise). But give me a brand new Lindy Bop frock and I’m in heaven.

Anyway, seems I’m gushing a bit, so a quick combination of an IAQ and a set of my favourite looks then….

The Sixties Housewife glamming up for a meal with her husband. 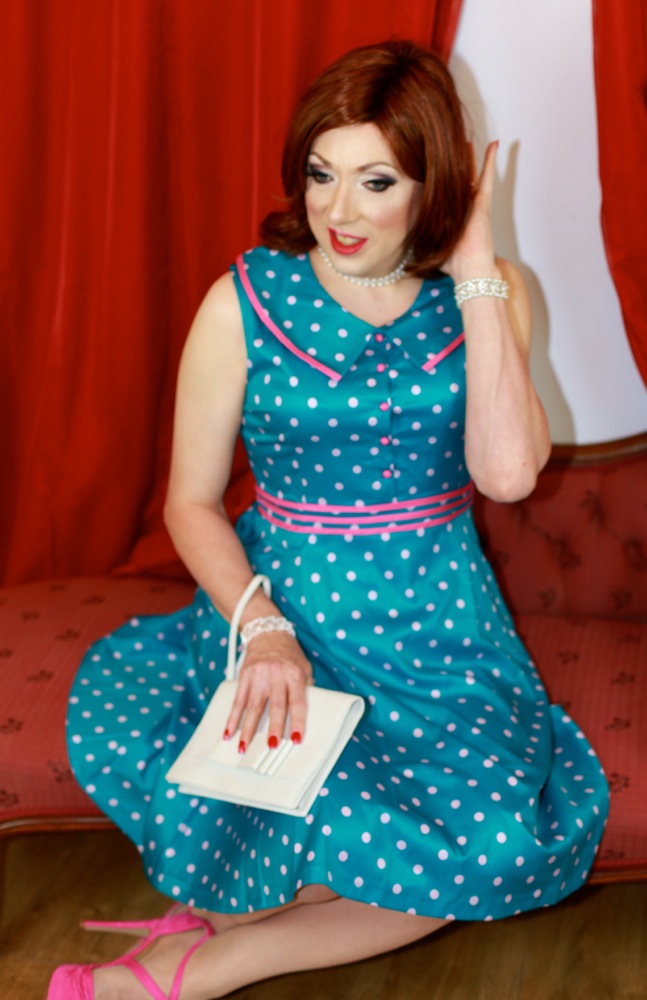 Actually, this frock was a last-minute purchase from Lindy Bop about three days before my last mega-session and I didn’t expect much out of it. The colours were a combo I don’t normally go for (green with pink polkadots), but when I unwrapped it it was *gorgeous*, a satin fabric that just seemed to whisper over bare legs or stockings, and a lovely retro collar style that framed the face perfectly.

So, lots of fun pictures and it was one of those dresses that seems to seep into your personality under the skin as you wear it. After about ten minutes I found myself on the verge of tears looking at the woman in the mirror. For a start I was the spitting image of my mother in pictures from the 1960s when she was, well, a hit with the lads. And more than that, Sarah couldn’t keep the smile off of her face, and the genuine happiness at the outfit shines through on the pictures. I love this set and have found myself imagining taking her out for dinner and a dance, with maybe a little soft kissing on the neck after. Now *thats* confusion…. 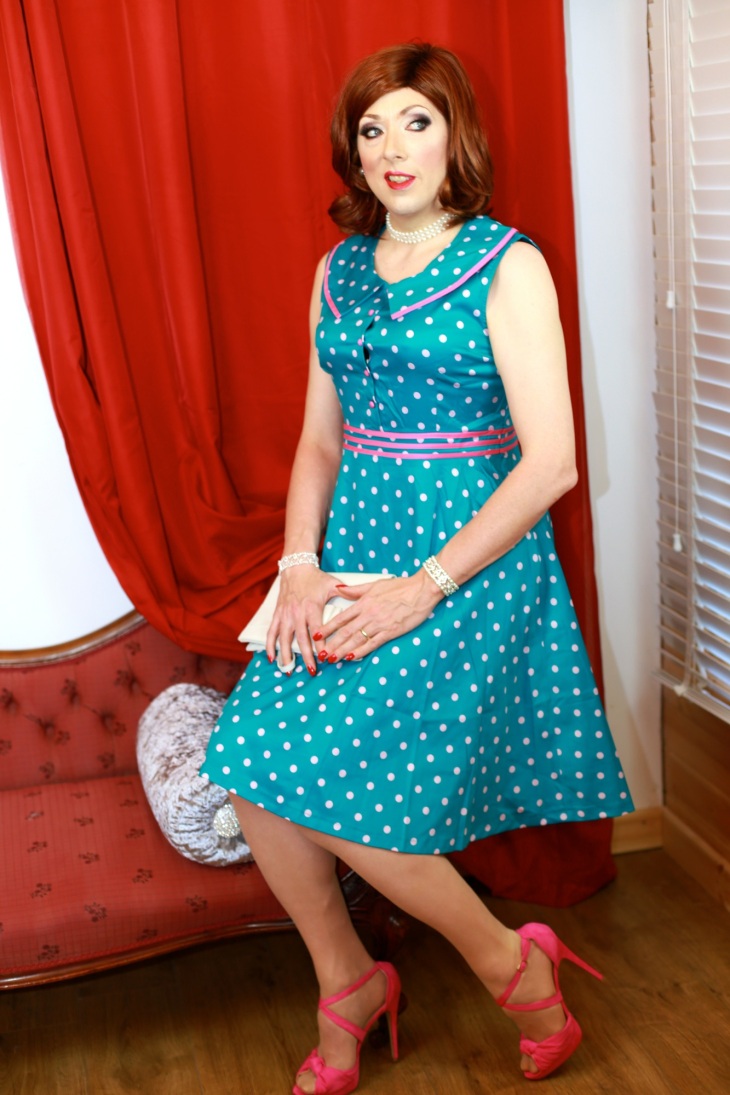 And yeah, the heels helped a lot. You can’t help but take a feminine pose when your feet are nigh on 70 degrees to the floor. Lots of tottering and femm poses.

The most wonderful thing about this is I Tweeted a picture of the frock and gushed over how much I loved it, tagged it with Lindy Bop and they retweeted it. So either I can just about pass as a retro-obsessed woman or they are TG friendly. Either way, result.

The Fifties housewife taking a break from her chores 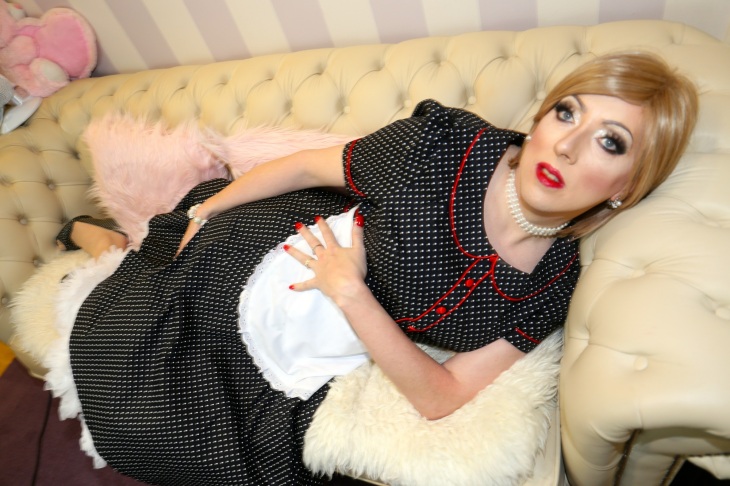 Another Lindy Bop dress, this one I’ve worn a number of times in different guises. It’s the one in the 60s look at the start of the blog post, but this time I wanted a proper 1950s feel, good jewellery, petticoat, peeping-toe heels, all the little ticks that identifies the woman wearing the outfit as a retro-chic girl.

And it worked a treat. I love the colour of this frock, small white polkadots on black with red lining, love the style of the collar and buttons. I came *very* close to wearing this outfit to the Wayout rather than the original 50s outfit and something tells me I’d have had more fun in this outfit and, oddly, less unwanted attention. Partly because she looks spoken for.

Also the idea of a petticoat is something else that does it for me. It’s like no part of male clothing, it’s completely impractical and makes walking through doorways (and passed tables laden with drinks) an utter nightmare, but the feel of it is sublime. Whenever I can I add a petticoat to an outfit, the idea of swimming in frills and the way the skirt flares out and gathers around you as you walk is just so girlie I literally want to squeee when I’m wearing it. Which I don’t, unfortunately, because although I’m pretty open with my love of being a retro styled t-gurl there’s a tiny piece of machismo buried down deep that is resentful at any seriously sissy-like behaviour. Spoilsport.

Cue a picture of Sarah looking surprised as her man catches her re-arranging her under-garments. Ahh, the joys of an imagination *and* a fetish combined…. 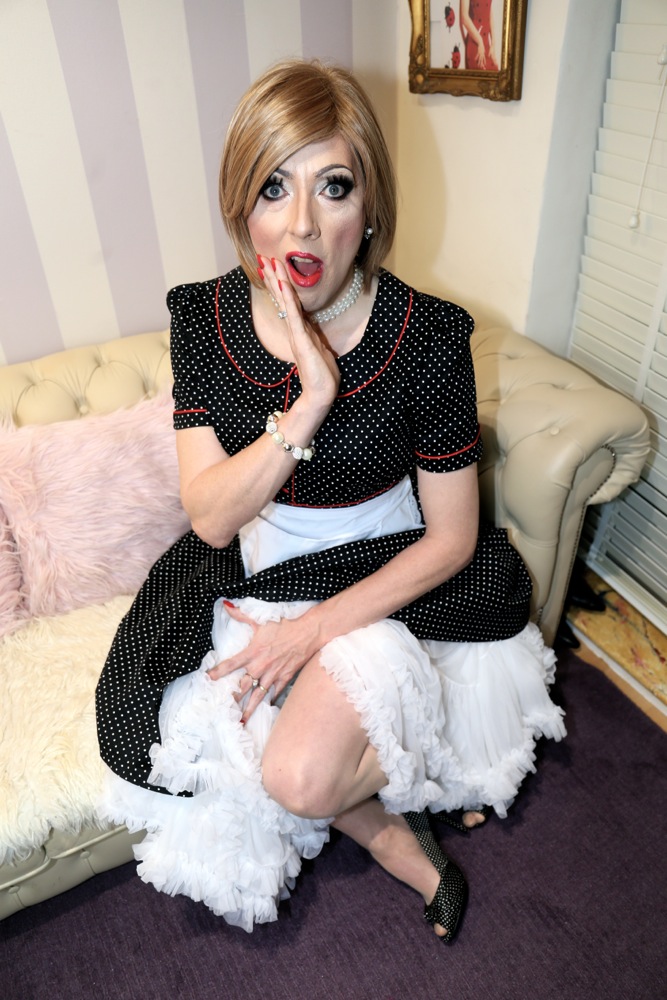 This outfit got a little overlooked when I did it, which is a shame, because on the same session we created Kitty Klaws and the teacher look which I did a set of, cough, her eating a banana badly. Go look at Flickr if that’s something you want to see (not going to pretend I didn’t find it amusing) but here’s a sneak look so we can move onto the 1940s chick without lingering on the thought of the banana. 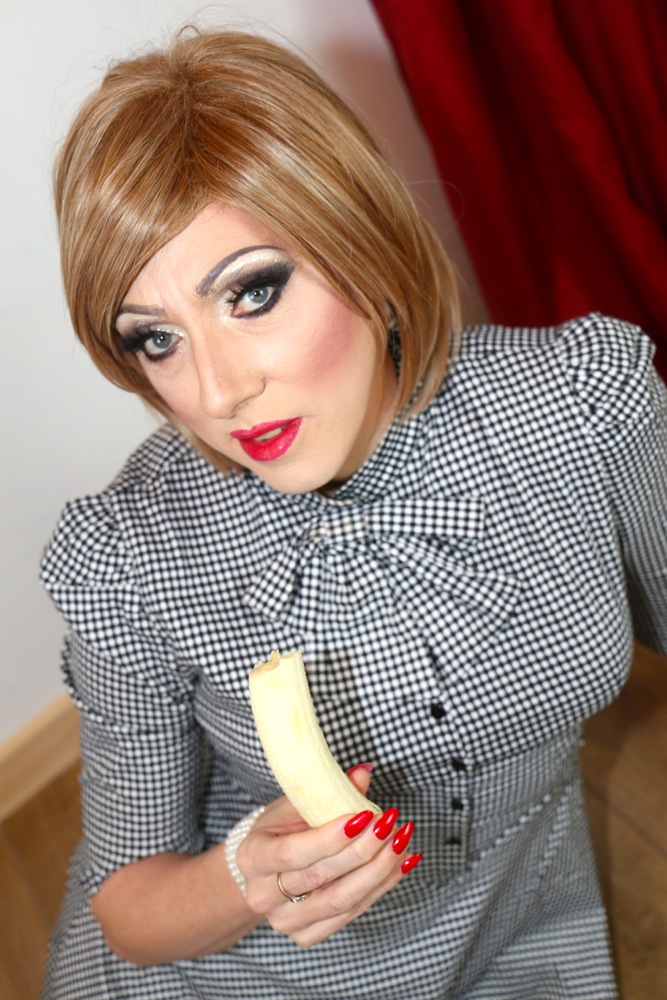 Anyway, having got that large dose of potassium out of my system, the 1940s femme fatale came around by accident. I’d bought a lovely office style frock (from the same people who did the banana-teacher frock, dammit, back there again) and Cindy thought it looked a lot like a funeral dress, so we put Sarah in it with some accessories including a lovely 1940s fascinator and the result was a giggle. 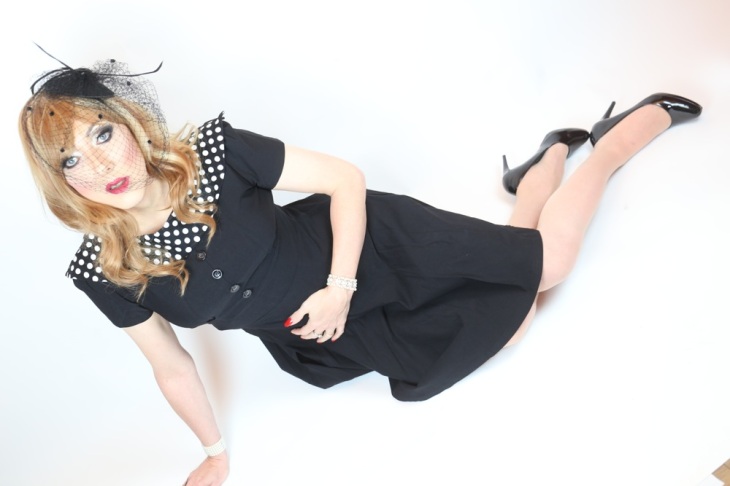 I looked like the Black Widow who’d murdered her rich, fat and old husband for his money before running off with the lithe and tanned pool-boy. Again, imagination + fetish.

It had a lovely 1940s feel to it, the extended collar puffing up the sleeves, the tight waist flaring out to the skirt and the neat little buttons. Add some attitude and accessories and I was instantly transported to my husbands grave, thinking of how to spend my inheritance. 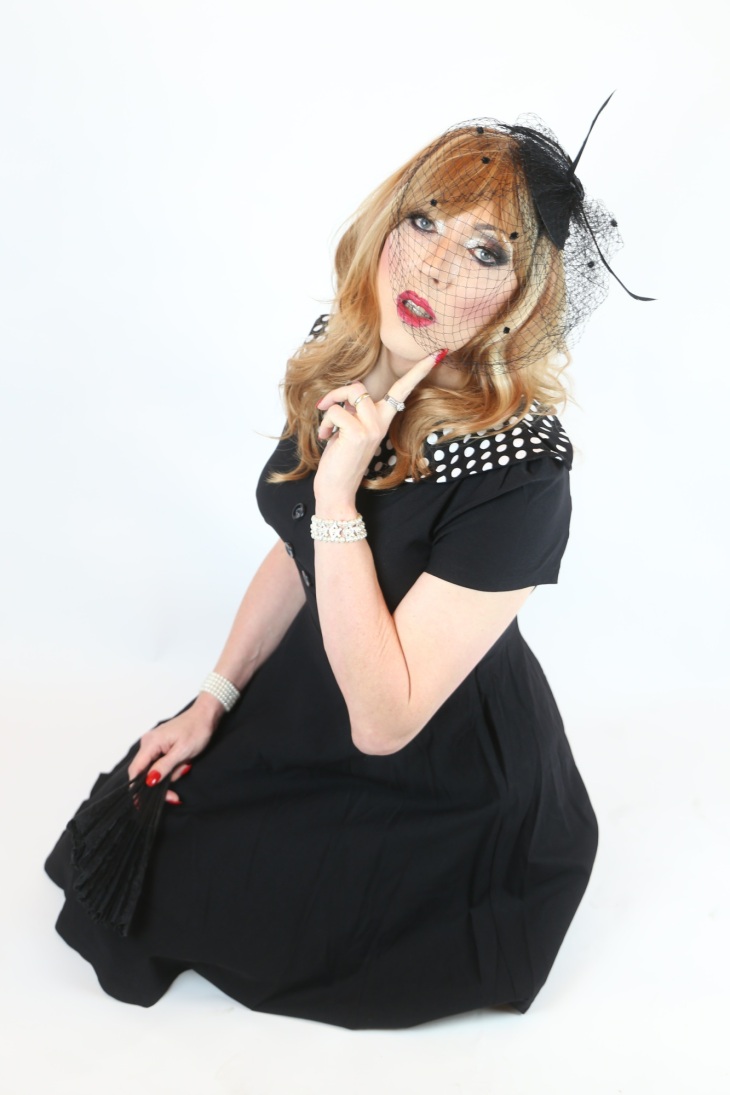 I’ve mentioned this before, but the whole retro fetish thing isn’t about the sexuality. But, I’d be her pool-boy in a heartbeat. 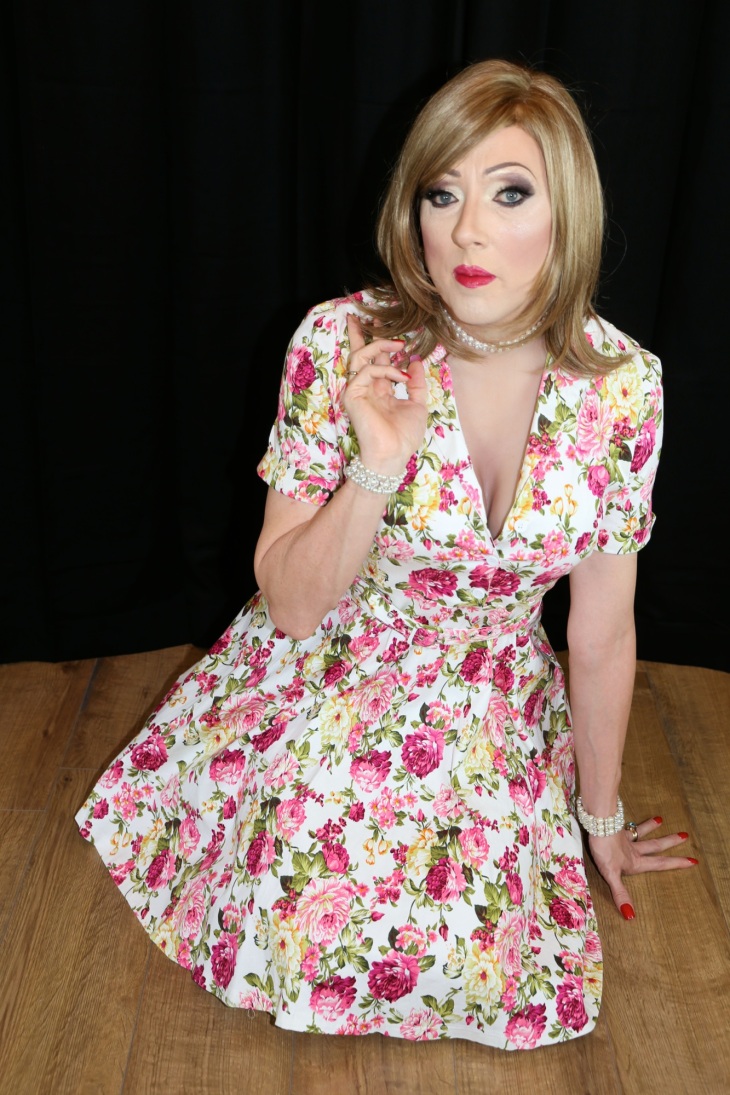 This is the style that first piqued my interest in trying old-style retro fashions. The idea of a nice dress just for taking tea in while the men were off playing golf, talking stocks and shares the like, seemed to flick a switch in my head.

The first ever retro frock I owned was a Vivianne of Holloway one, a little expensive but gloriously well made, and I did a photoshoot with Alison Dale where she, slightly bemusedly, had me pose. I don’t think she’d had a girl who was that into the retro frockage before so lots of odd comments about the ‘mumsiness’ of the frock between shots.

I managed to get an almost identical style from the wonderful Lindy Bop website and did another shoot with it with Cindy, and I loved the results. 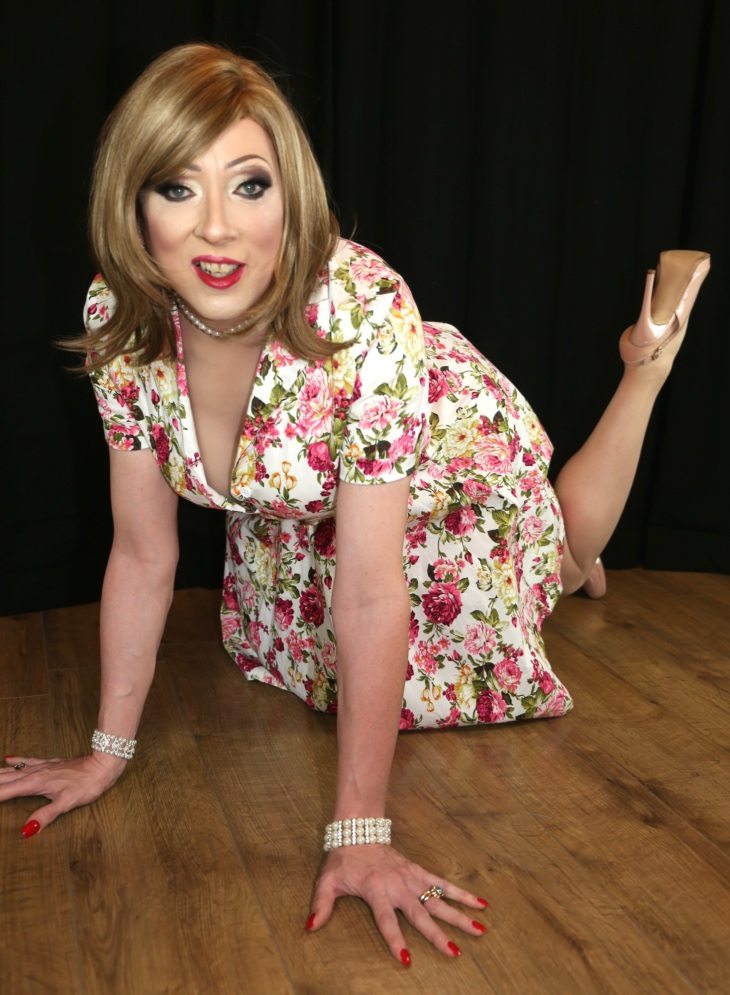 I looked like a confident middle-aged woman from the 1940s. I’ll take that. It’s just such a fun frock to wear, holds you in in the right places, flares out in the others, padded shoulders for your nattily dressed man to rest his besuited arm around, what’s not to love?

Just scanned up and seen how long the post is, whoops. I had planned to go through the Marilyn look, the 1960s short frocks, the 1970s chiffon number, but I’ll go over those at a later date. Real reason for this post? I have another session in under a week and I’m going to do a complete retro day – I have the most wonderful outfits prepared (a 1940s hostess dress in green that will just be delicious with a red-head look, a couple of proper hobble-dresses, some 1950s summer frocks) and we’ll be trying a proper retro makeup look. I’m also doing a modern session the day after because, well, Kitty Klaws. I’ll leave it at that…

Stay beautiful and if you get a chance to go back in time and feel the rustle of a petticoat, the swish of satin or the delicate touch of chiffon, take it. Your inner 40s/50s/60s girl will appreciate it. 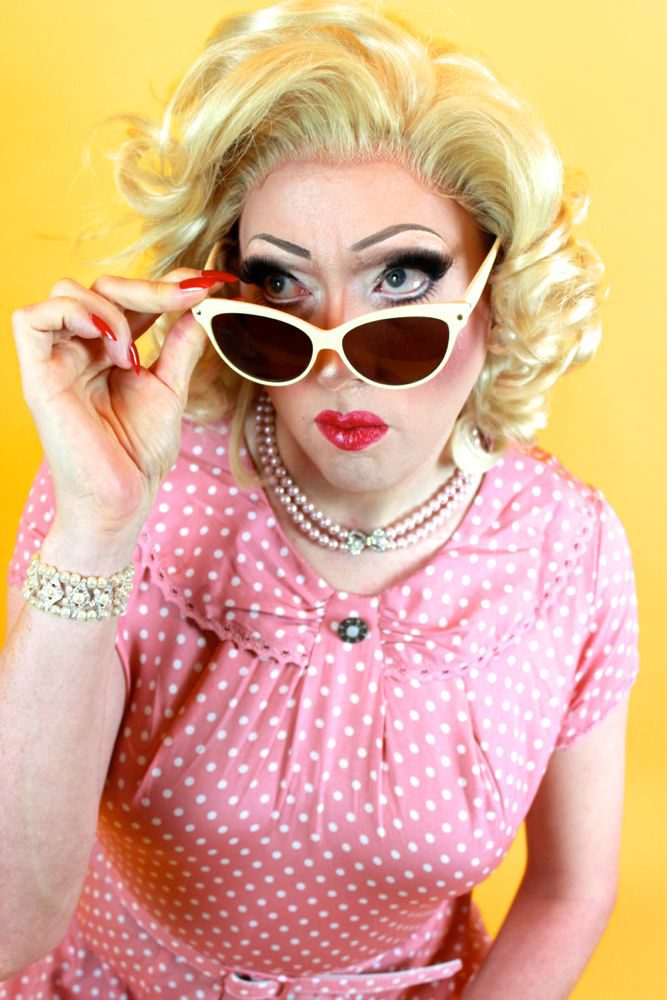